Record-challenging warmth to persist across West, but a big cooldown looms

The Northwest has had a very warm start to fall, as summerlike warmth has resulted in numerous daily record highs over the past week. AccuWeather meteorologists say residents who are fond of the warmer weather should enjoy it while they can, as the warmth will come to an abrupt end early next week.

Unseasonable warmth did take a brief pause in the Pacific Northwest Tuesday and Wednesday as low clouds and even some drizzle affected coastal locations. However, warmer conditions continued unabated farther inland and higher temperatures returned to coastal locations on Thursday. 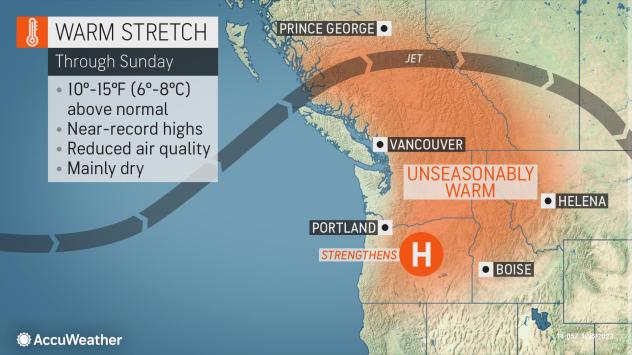 The high on Thursday in Portland, Oregon, fell short of the record of 89 degrees set there in 1952. The city's daily record Friday of 83 degrees from 2014 could fall, however, with a forecast high of 84 degrees that day.

This warmth will continue right into the weekend. Saturday's predicted high temperature of 82 and Sunday's forecast of 83 degrees will tie records on each of those days in Portland if the mercury reaches those marks.

Farther north, Seattle reached 74 degrees Thursday, which will came close to 78 degrees, the daily record that was set in 2014. Friday's record of 75 degrees was last reached in 2012 and could be toppled as AccuWeather forecasters currently predict a high of 78 degrees. Records are unlikely this weekend in Seattle, even though temperatures will remain above normal.

The average high temperature for this time of year in Seattle is 64, while average highs are around 66 for Portland. 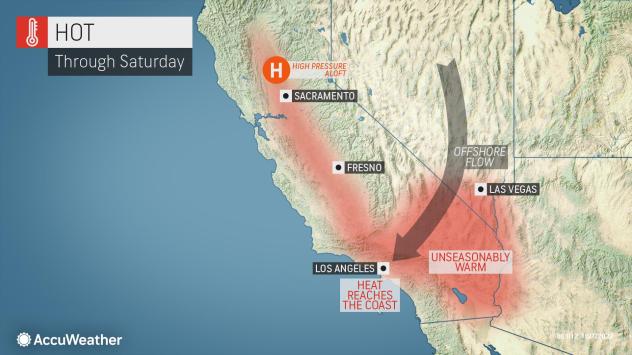 California will heat up Friday and Saturday. Fresno is forecast to soar to 95 degrees Friday, nearing the record of 97 degrees set in 2014. Saturday is expected to reach 95 degrees, although the record of 99 degrees for that day will probably be just out of reach.

Cooler air to finally return to much of western US

Forecasters say a big change will begin Monday. A dip in the jet stream is expected to move into Washington before dropping even farther south Tuesday and Wednesday. Although the West Coast will cool down, the biggest effects may be felt farther east.

"A strong area of low pressure will bring a taste of fall to the Northwest that does not include pumpkin, but rather windy conditions, much lower temperatures and even snow for higher elevations," said AccuWeather Storm Warning Meteorologist Matthew Massey.

Even though precipitation may be somewhat limited, snowflakes could fall at the highest elevations in western Montana Tuesday afternoon. The chance of snow will move southward Tuesday night, with Yellowstone National Park potentially getting a light snow accumulation. Snow levels that may start out around 9,000 feet could get as low as 7,500 in and around Yellowstone by late Tuesday night.

"Some locations could see nearly a 20-degree drop within 12 hours," said Massey. 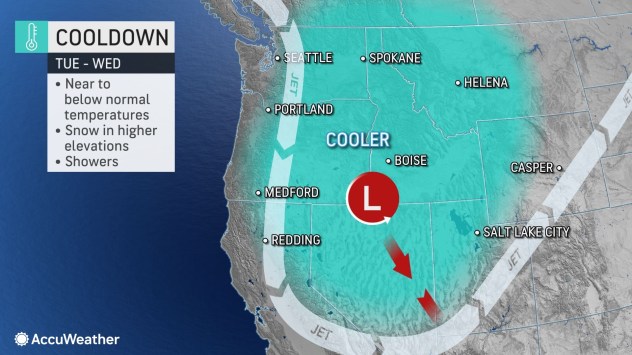 Precipitation is expected to be even spottier by Wednesday, but a few snowflakes could fly at the very highest elevations in western Colorado.

Due to only a bit of precipitation, any of the strong winds could elevate the fire concern, forecasters say. Although the drought eased a bit over interior western locations thanks to an active monsoon season, more precipitation is still needed.

The chance for any rain or snow will remain low through the end of next week; however, it does not appear that record-challenging heat will be returning anytime soon.