37° F Browse for your location

Students at the Inner Mongolia University for Nationalities in northern China struggled through strong winds as a snowstorm hit the area on Nov. 18.

A strong storm system tracking eastward from the Mediterranean will sweep through the Middle East into the weekend bringing snow and blowing dust with it.

The storm first spread rain and thunderstorms across southern and eastern Turkey as well as Cyprus through the end of the week. Locally heavy downpours occurred near the Mediterranean coast as thunderstorms erupted, increasing the risk for flash flooding from Antalya to Adana in Turkey, as well as across Cyprus.

Farther away from the Mediterranean, colder air will be in place allowing a mix of rain and snow showers to occur across eastern Turkey.

While most communities in lower elevations will get only rain, places in higher elevation that sit between 1,500 and 2,000 meters (about 5,000 and 6,500 feet) like Erzurum can receive a mix of rain and snow showers. In elevations above 2,000 meters (6,500 feet), a few centimeters (inches) of snow could accumulate through the weekend making for slow and dangerous travel through some of the mountain passes. 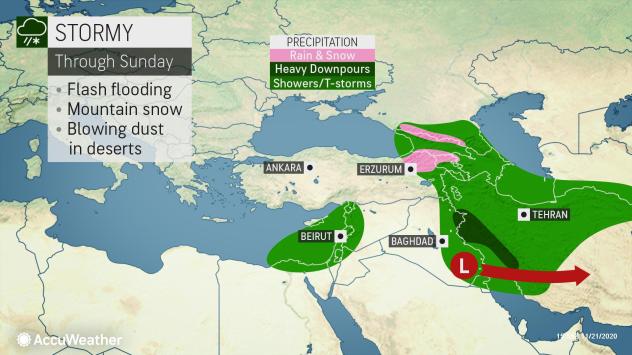 Through the day on Friday, showers and thunderstorms also spread from Jerusalem to Lebanon and western Syria.

At least 22 people were rescued from flooding in residential buildings in Ness Ziona, located to the west of Jerusalem, on Saturday, according to a local news source. No casualties were reported.

As the storm progresses farther to the east through the weekend, drier conditions will return to much of Turkey and the western Mediterranean. In contrast, rain will return to Iraq, Iran and northern Saudi Arabia.

Scattered showers and thunderstorms became heavy at times from Baghdad into northern Saudi Arabia on Saturday as a cold front passed through the region. There were reports that some flooding developed in the Baghdad.

More widespread and heavier rainfall is expected to occur in the mountainous areas of western Iran through the weekend where 50-100 mm (2-4 inches) of rain can lead to flash flooding.

Less intense rainfall can also spread across northern Iran, including in Tehran, from Friday night into Saturday. Tehran has received only about 25% of their normal November precipitation, so the rainfall this weekend is needed and will help to make up for a dry start to the month.

In many desert locations across Jordan, southern Iraq and northern Saudi Arabia that do not get rainfall, blowing sand and dust were a concern on Friday and Saturday. As the storm passed to the north, a gusty south and southwesterly wind can stirred up the dry ground causing areas of reduced visibility and lowered air quality.

More settled conditions are expected to return to the region early next week.