Skygazers in Senja, Norway, enjoyed the northern lights illuminating the night sky on Nov. 14 as captured in this time-lapse video.

The storm system that worked in tandem with former Tropical Storm Theta to produce unsettled weather across northwestern Europe earlier this week will be the catalyst for winterlike conditions across eastern Europe into the start of the weekend.

After bringing areas of heavy rain and gusty winds to the British Isles through Wednesday, the storm will continue advancing eastward through Saturday. 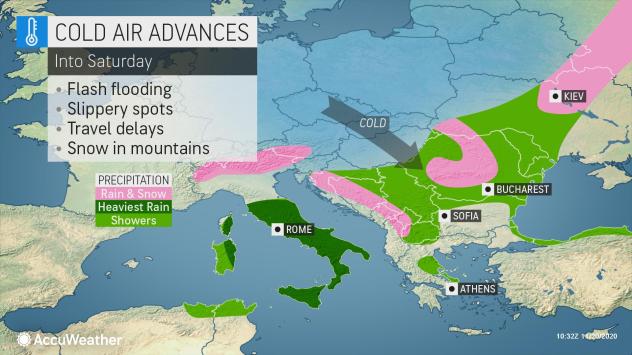 A cold front associated with this storm will advance south and eastward through Friday with showers spreading into Ukraine, northern Romania and the northern Balkans.

Cold air surging in behind this front will drop temperatures by about 5-11 degrees Celsius (10-20 degrees Fahrenheit), bringing a taste of winter weather to central and eastern Europe.

As the colder air filters into eastern Europe, cold air may arrive fast enough to allow some snow to mix with rain across the higher elevations before coming to an end this weekend.

In the highest elevations of eastern Europe, precipitation is forecast to fall as just snow. Up to a few centimeters (inches) can accumulate in these areas.

Rain and snow showers are expected to be light through the end of the week and it is unlikely that there will be widespread flash flooding or snow heavy enough to cause significant travel impacts.

However, even small slippery spots can still slow down travel, especially in areas that remain wet as temperatures drop below zero C (32 F) during overnight hours.

Meanwhile, another storm will develop along this front and sink south. This will bring areas of heavier rainfall to central and southern Italy through the start of the weekend.

Rainfall totals can reach as high as 25-75 mm (1-3 inches) across these areas, with the higher totals more likely in the mountains. This amount of rain can cause flash flooding in low-lying and poor drainage locations and can also increase the risk for mudslides.

While this storm system continues to sink south into northern Africa through the end of the weekend, chilly but dry conditions will linger over much of central and southern Europe.

Theta developed into a tropical storm over the open waters of the Atlantic Ocean last week. The storm continued to drift to the east, gradually losing tropical characteristics into the weekend before getting picked up by a nontropical storm moving into western Europe.

These two storms worked together to bring areas of heavy rain and strong wind gusts to the British Isles during the first half of the week. Wind gusts of 64-96 km/h(40-60 mph) were reported across the region on Tuesday with the highest gust of 167 km/h (104 mph) occurring at Cairngorm Summit in Scotland.