Most significant storm in months for Northern California on the way with rain, mountain snow

AccuWeather meteorologists are closely monitoring the potential for a powerful storm to bring rain and what would be the season's first mountain snow to Northern California from Sunday through Monday.

A sprawling area of low pressure in the eastern Pacific Ocean is expected to track southeast this weekend and remain off the Pacific Northwest coast. It is then predicted to stall out and perhaps even track a bit to the west before it eventually moves onshore in Northern California. This system appears poised to deliver the Golden State's best opportunity for a widespread, long-duration rainfall event in several months. 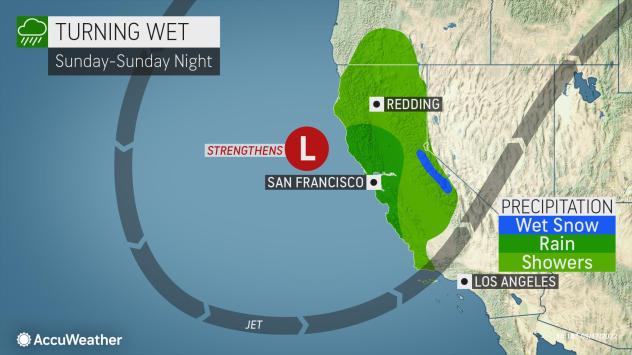 "This developing storm system will bring rounds of rain to California, some of it heavy, especially across Northern California," AccuWeather Senior Meteorologist Michael LeSeney said.

This storm will tap into a deep pool of cold air aloft and produce the season's first threat of snow at the highest elevations.

"Snowfall will be primarily in the highest elevations of the Sierra Nevada, but roads may become slushy or snow-covered through the high passes, like Carson Pass along California State Route 88, Monday night," LeSeney said.

The coverage of mountain snow will depend on just how far snow levels fall as the storm intensifies. At the very least, accumulating snowfall is expected in the highest elevations, a sign of the coming turn of the seasons. 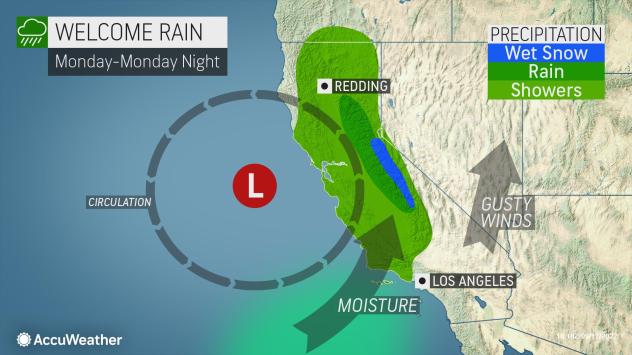 Whether or not this system pulls down enough cold air to produce significant snow through most of the Sierra Nevada, a few days of much-needed rain are expected in California, something that could be considered as welcome news for many. According to the United States Drought Monitor, nearly all of the state is experiencing at least severe drought conditions as of Sept. 15.

The ongoing drought was recently exacerbated by a historic heat wave earlier this month across California that brought the highest temperature in recorded history to downtown Sacramento while setting new September records in cities such as Fresno, Ukiah and Merced. 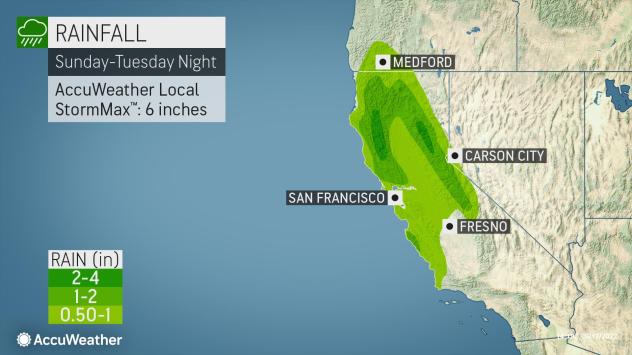 The incoming rain could also greatly benefit firefighting efforts across the state. Earlier this past week, the Mosquito Fire, which is burning northeast of Sacramento in El Dorado and Placer counties, became the largest wildfire so far this year in California. As of Saturday, Sept. 17, the fire has scorched more than 73,000 acres.

So far in 2022, more than 6,400 wildfires have burned over 359,000 acres in the state, according to the California Department of Forestry and Fire Protection.

"Following heat more fitting of July to begin the month, temperatures have fallen below normal over the past couple of days in California," AccuWeather Meteorologist Ryan Adamson explained. "The upcoming weather in parts of the Golden State will be more representative of winter than summer or fall."

Winter is typically the wettest time of the year across much of California. The storm track often carries in rich moisture from the Pacific Ocean, enhancing rainfall and making for more frequent rounds of precipitation.

Behind this storm, unusually warm conditions will develop once again as strong high pressure returns to the West. Some of the same parts of California that broke all-time temperature records to start September could approach daily record highs to end the month.

Vanishing act: Exploring the case of the disappearing moon