A weathermaker known as a Kona low will allow torrential downpours to target the islands and raise the risk of flash flooding. The same storm system could even allow some snow to fall in the highest elevations.

The post-partial eclipse of the moon on Nov. 19 can be seen glowing above the erupting volcano at the Hawaii Volcanoes Park.

A potent storm with heavy rainfall will take aim at the drought-stricken island chain of Hawaii late in the week, but this much-needed rain could trigger flash flooding and mudslides as well.

As of Dec. 1, Hawaii is abnormally dry, according to the United States Drought Monitor, with about 29 percent of the Hawaiian Islands in severe drought conditions or worse. On the island of Oahu, Honolulu recorded just 3% of its average rainfall throughout the month of November, and the same can be said since the beginning of October. In fact, since July 1, the city has only reported 10% of its average precipitation.

The Big Island has also been hit hard by this drought. Hilo received only a fraction of its average rainfall, less than 40% throughout the month of November. In Kailua, the November rainfall was a measly 12% of normal.

As for the island of Maui, when winds from the east come down from the mountains, this can restrict precipitation and cause the land to dry out, according to AccuWeather Senior Meteorologist Carl Babinski. Sugar cane that is grown on the island can become increasingly flammable as drought wages on. 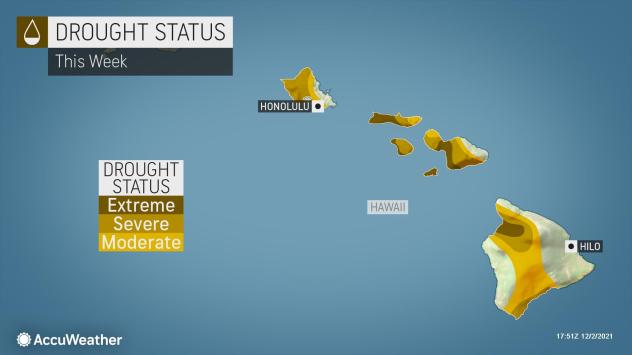 Heavy rainfall and even flooding are expected to begin Friday morning and last through Saturday, particularly across the northwestern islands as a front arrives and moves generally southeastward.

"That storm will push a moisture-rich front through the islands this weekend with the risk of heavy rain and perhaps localized flooding on the Big Island," said AccuWeather Senior Meteorologist Alex Sosnowski, who noted that this front could be associated with something called a Kona low.

Kona lows are storms that come from the western or southwestern side of the islands and are formed when a southward dip in the jet stream breaks off and moves in a circular pattern.

Hawaii typically experiences about two to three Kona low events in the late fall, winter and early spring. They can produce a wide array of hazards from rain, hail and flash flooding to mudslides, high winds and even high-elevation snow.

This front could stall over the island chain and allow rain to fall continuously. Despite the recent drought conditions, flash flooding is a major risk because when the ground is dry it has a hard time absorbing the rain at the rate and quantity that falls.

High winds are anticipated as well from the front, and the summit of Haleakala is forecast to have wind gusts in excess of 60 mph over the weekend. The storm will also create the potential for mudslides.

Power outages are another risk with this event, as the ground will be more unstable and saturated, allowing trees to be blown over easily. Forecasters say motorists should never cross a flooded roadway because the water may be deeper than expected and moving swiftly. 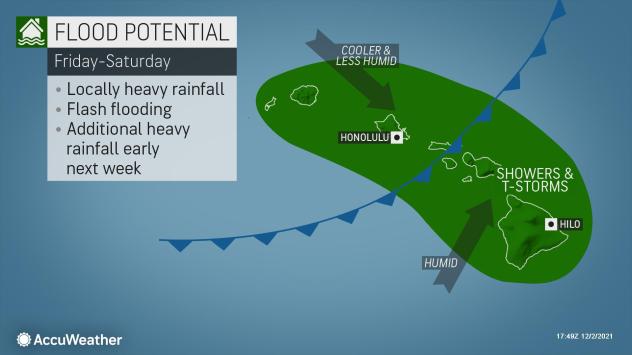 Even without mudslides and flooding, heavy rain could still hamper outdoor plans, cause travel slowdowns and produce rough surf and choppy seas.

The front is anticipated to finish crossing the islands by Saturday, but Hawaii won't be in the clear just yet.

"It is possible that the front pulls back over the islands," said AccuWeather Meteorologist Thomas Geiger, who added that a plume of tropical moisture could hit the islands again early next week.

"There is a threat that the rain Sunday and Monday is even heavier than Friday and Saturday," said Geiger.

Some snow is even in the forecast although it will mostly fall at the highest elevations.

"Although Hawaii has the reputation of year-round warmth, snow actually makes a yearly appearance atop some of its highest peaks," said AccuWeather Meteorologist Lauren Hyde.

Cold air will immediately accompany the front and will allow some snow levels to fall to around 8,000 feet from sea level. That would allow a few prominent summits to receive some snow with this event, including Mauna Loa, Haleakala and Mauna Kea.