Hottest weather of the year so far in the forecast for Seattle, Portland

As temperatures rise, so do the chances for heat-related illness. Here's some tips on how to stay safe.

A brief surge of heat is coming to the northwestern United States this weekend, and while temperatures won't eclipse those produced during the historic heat wave from June 2021, the coming days will be the hottest for many areas since last August, AccuWeather meteorologists say.

The Northwest has gotten a little taste of summer warmth here and there so far this month with the most recent brief spike in temperatures occurring at midweek. Seattle recorded its first high above 75 degrees on Tuesday and just missed setting a record for the latest such high in the mid-70s.

However, a new surge of warm air throughout the weekend and into Monday will be enough to push temperatures well into the 80s and 90s in Washington, Oregon and Idaho just a few days after the summer solstice marked the official start of summer on June 21.

Millions of people in the region likely remember the heat from last summer. It was around this time last year when a number of locations recorded their all-time record highs for any date. From June 26-28, 2021, temperatures climbed to 108, 112 and 116 degrees Fahrenheit respectively in Portland, Oregon. The same stretch of days in Seattle brought highs of 102, 104 and 108 degrees. 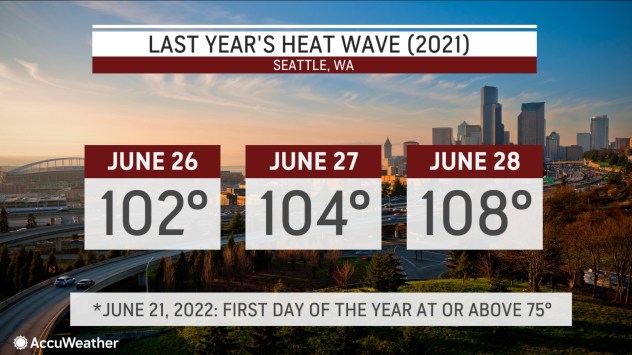 Each consecutive day in Portland set an all-time record high, while Seattle set all-time highs on June 27 and June 28. During the prior 126 years, Seattle had reached 100 degrees only three other times, according to the National Oceanic and Atmospheric Administration.

The unprecedented heat wave led to more than 500 heat-related deaths across the U.S. and Canada, according to Oregon Public Broadcasting (OPB). Many of the deaths occurred in the Portland area, according to OPB.

Heat extended beyond the northern border of the U.S. and reached into British Columbia, Canada, as well as across the interior Northwest.

The setup with this month's heat wave will be a little different than from June 2021, forecasters say.

"Instead of an intense area of high pressure at most levels of the atmosphere over British Columbia, a large, but a comparatively weaker zone of high pressure centered over Nevada and Utah will poke northward into Idaho and Montana for a few days," AccuWeather Senior Meteorologist Joe Lundberg said.

Temperatures during the upcoming heat wave will peak 15-25 degrees lower, on average when compared to late June 2021. Still, even with highs forecast to be in the mid- to upper 80s in Spokane, the upper 80s in Seattle and the mid-90s in Portland, the heat can pose some dangers to sensitive individuals, such as the elderly and young children.

On Saturday, Seattle reached 88 degrees and Portland topped out at 93 degrees, the highest temperature of the year so far for both cities.

Air conditioning is still limited in the Northwest, but where possible people should seek a cool environment and avoid doing strenuous physical labor or exercise during the heat of the afternoon, when possible. 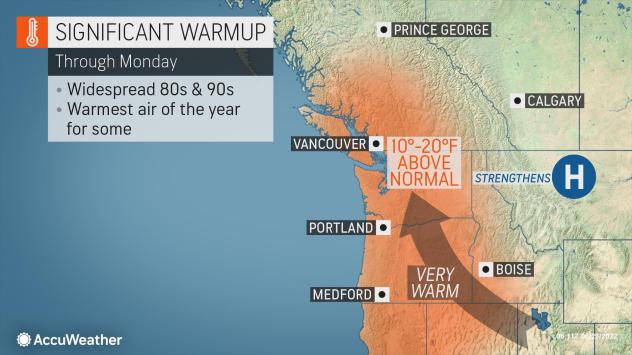 "The last time Seattle had a high in the upper 80s or greater was on Aug. 13, when the temperature reached 91, and Spokane last hit 88 on Sept. 7," Lundberg said.

Despite the heat wave, Seattle and Portland are not predicted to set any daily records over the next several days, thanks in part to last year’s brutally hot June.

When temperatures soar early in the season, people can quickly seek relief by cooling off in nearby bodies of water. However, forecasters say people should be aware of the risk of cold water shock.

"As temperatures climb to their highest levels of the year so far, streams, rivers and ponds can still be quite chilly and risky to enter," AccuWeather Meteorologist Brandon Buckingham said. Jumping into water with temperatures in the 60s or lower can lead to a host of dangers ranging from shortness of breath to muscle cramps to hypothermia and cardiac arrest, experts say.

Unseasonably cool and wet conditions from this spring have left plenty of moisture in the ground and most vegetation green and lush in a large part of the region this week. 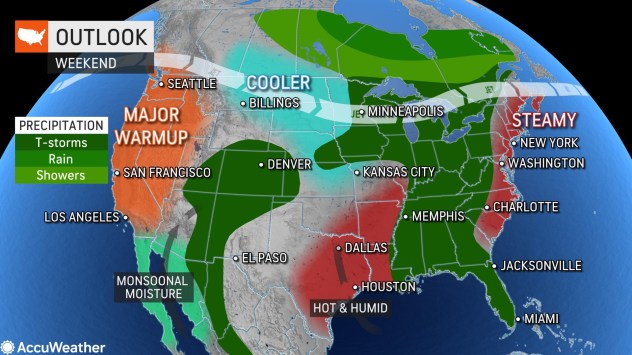 "Because of the damp ground and vegetation, the risk of wildfire ignition will be rather low in western Oregon and much of Washington during the hot spell this weekend," Buckingham said. However, the surge of heat will accelerate the drying process, despite being behind schedule at this point of the dry season in the region.

There are some pockets of moderate drought in eastern Washington while drought conditions range from extreme to exceptional in central Oregon, according to the United State Drought Monitor. These areas could develop a high risk of wildfire ignition as temperatures climb this weekend and early next week.

Early this week, a storm from the Pacific will have enough energy to push a cool front across the region from late Monday to Tuesday. That Pacific air mass should be enough to drop temperatures by 5-15 degrees or more before midweek.

It is possible the storm may not only bring spotty shower activity to western Washington and the Cascades, but it could produce thunderstorms with little or no rain farther to the east over Washington and Oregon. In that case, the risk of lightning-induced fires may increase.