Heat safety and your pets

A well-known expert gives advice on how to keep your pets safe during extreme heat.

There are no signs of Mother Nature throttling back on the heat anytime soon across the interior West and High Plains. In fact, AccuWeather meteorologists warn that the most sizzling conditions yet this summer season are expected to build even more this week, putting dozens of record highs in jeopardy as temperatures soar past the century mark.

Unrelenting days of extreme temperatures are likely to put a significant strain not only on residents and visitors of the region, but also livestock, crops and the power grid. Rolling blackouts have already been an ongoing problem in Texas due to weeks of searing heat in heavily populated areas, including in Houston during an on-air TV broadcast.

Forecasters say that with the next wave of dangerously hot weather set to build this week, temperatures could reach their highest levels of the year so far from Rapid City, South Dakota, to Wichita, Kansas, as well as Oklahoma City and Dallas. Temperatures in many locales across the High Plains have averaged 3-6 degrees Fahrenheit above normal month-to-date and the intensifying heat will further elevate these departures from normal. 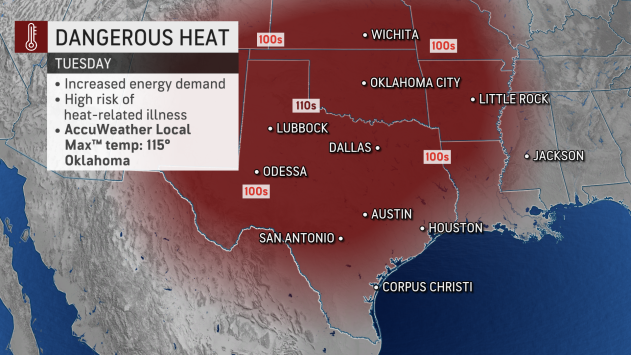 An area of high pressure already in place across the West will expand eastward and strengthen early in the week.

"With temperatures in the region already running well above average, the addition of higher pressure moving in will only act to increase temperatures," AccuWeather Meteorologist Joseph Bauer said.

Triple-digit heat is expected to swelter a swath from South Dakota to Texas. Rapid City will approach their daily record of 106 F set in 2006 and likely eclipse their hottest day of the year so far set back on June 29 when a high of 102 was recorded. Forecast highs in the Texas hubs of Dallas (109) and Lubbock (105) are set to eclipse daily records, while the major metro area of Denver is forecast to be 100, which would narrowly break the daily record of 99 set in 2020.

Some of the records that will be challenged have stood since the 1930s, according to Bauer.

With a high of 104 F, North Platte, Nebraska, broke Monday's record high of 103 set way back in 1936. Goodland, Kansas, fell just shy of matching their high point of 106 for that date, set in the same year, with the high temperature reaching 102 in the city. 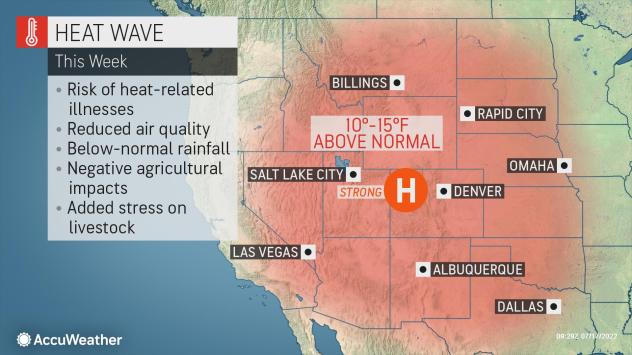 The intense heat will be a quick-hitter in the northern Plains as more seasonably warm air will return on Tuesday. Farther south, temperatures are forecast to soar even higher.

High temperatures in the middle to upper 100s are expected to be widespread from western Kansas and West Texas through Oklahoma and into southwestern Missouri and northwestern Arkansas. A small pocket of temperatures eclipsing the 110-degree mark is possible in part of northwestern Texas, western and central Oklahoma and far southern Kansas.

The hottest it has been in Oklahoma City this summer is 105 on July 17. The city could come within a degree or two of 110 on Tuesday, perhaps falling just shy of that date's record of 108. That record was also set during the Plains heat wave of 1936.

By Thursday, San Antonio, Texas, could also face record heat. The highest it has ever been on July 21 in the city is 102 set way back in 1911, but there is a high likelihood that this mark could be challenged.

Especially during the hottest part of the day, anyone who must be out and about is urged to monitor for signs of heat-related illnesses like heat exhaustion or heat stroke.

Temperatures inside parked cars and other vehicles will also rise to dangerous levels amidst searing heat and intense sunshine. Travelers are urged never to leave children or pets inside unattended in vehicles as temperatures can climb to deadly levels in mere minutes.

Dangerous heat is forecast through the foreseeable future.

Be sure to stay safe in the heat and take extra care of our vulnerable populations! #okwx #texomawx pic.twitter.com/ngEKnI0Ivd

Given the risk of increased power outages amid the unrelenting heat, it will be important for any residents who find themselves in the dark to spend time at public cooling centers.

"Dry weather is forecast through much of the week, and with drought conditions already in place, this heat will put further stress on crops in the region," Bauer said. 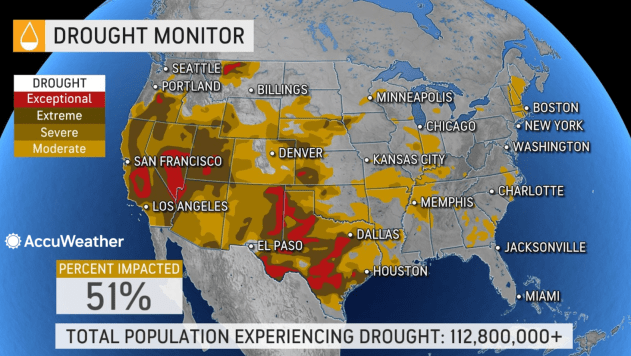 "Areas farther east from Iowa to Illinois can remain shielded from the highest temperatures which is good news for central portions of the Corn Belt," Bauer said.

Forecasters do not have good news for residents feeling the strain of the heat both physically and financially.

"The storm track is expected to remain lifted near the Canadian border through the week, which is not expected to bode well to bring relief from the heat or substantial precipitation chances to the Plains," Bauer said.