Heat wave to give way to 'downright chilly' conditions in Northeast

Following the heatwave, a pattern change will bring gusty winds and cloudiness as temperatures plummet.

The past two weekends were a night and day difference in the northeastern United States. Following record cold, dreary and generally miserable weather that marred the Memorial Day holiday weekend at the end of May, the first weekend of June brought widespread heat and humidity as the early stages of the region's first heat wave of 2021 baked the region.

That warmth and humidity lasted into this week, but AccuWeather meteorologists say things are about to change for this coming weekend. 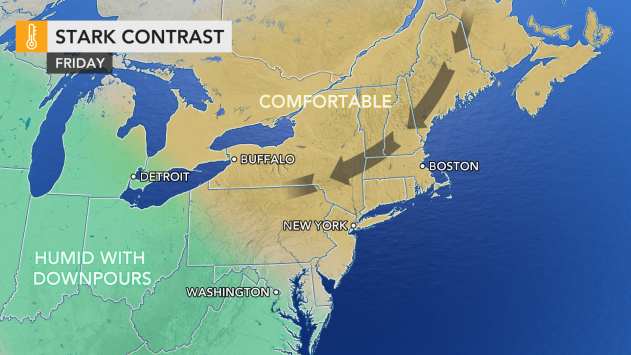 "As cooler and much drier air begins to penetrate the Northeast and portions of the mid-Atlantic late this week, many places will get relief from the midsummer heat and humidity that has gripped these areas," AccuWeather Senior Meteorologist Carl Babinski said.

In some cities, the difference in temperatures will be quite noticeable following the recent preview of July and August. For example, following highs at or above 90 degrees Fahrenheit every day from Saturday through Wednesday in Boston, temperatures are only reached 76 degrees on Thursday. However, 70-degree temperatures are around normal for the early to middle part of June. By Friday, even lower temperatures are expected. 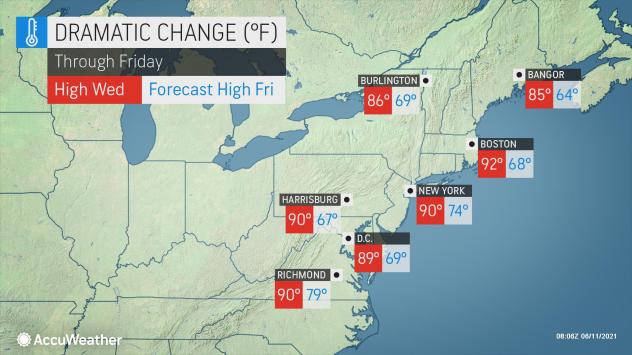 As the wind turns easterly on Friday, coastal locations from Maine to New Jersey are likely to be stuck in the 60s. However, even some inland cities will struggle to get out of the 60s. Following a high of 94 degrees in Harrisburg, Pennsylvania, on Sunday, the forecast for Friday is just 67 degrees.

"It will feel downright chilly in many Eastern cities on Friday afternoon, with considerable cloudiness and temperatures no higher than the upper 60s," stated Babinski.

Not only will temperatures be much lower, but humidity levels will drop as well. Despite the decline in humidity, precipitation is still expected. This will be especially true when the backdoor front initially arrives in any given location, as the cooler and drier air clashes with the warm and humid air. 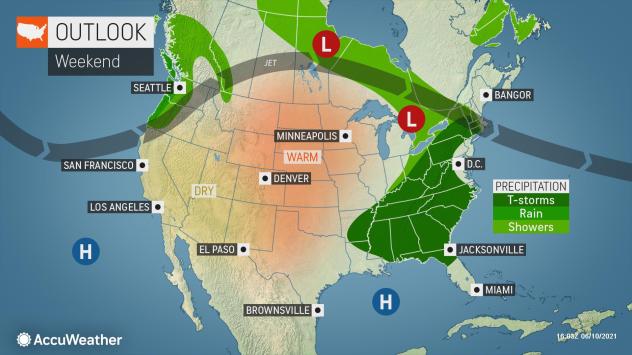 Some showers will still be possible on Friday, especially to the south of Pittsburgh, Harrisburg and Philadelphia. Elsewhere, the drier air should preclude much in the way of precipitation.

Friday is likely to be the chilliest day before temperatures begin to rebound for the weekend.

"A moderating trend will begin on Saturday, as sunshine will be able to push most readings back into the middle or upper 70s," said Babinski.

A spotty shower or thunderstorm cannot be ruled out to start the weekend, although most areas will remain dry. On Sunday, more widespread showers and thunderstorms are expected.

Somewhat warmer air will also arrive to round out the weekend, but temperatures in the upper 70s and lower 80s will be close to normal for the middle of June and a far cry from the 90s that many cities have endured this week. Highs in the 70s and 80s should continue into early next week.