Front ushers in coldest air of the season across the South

It's time to bust out those jackets, brew up some pumpkin spice coffee, and get ready for an abrupt transition into fall across the South this weekend, as a powerful cold front is ushering in the coolest air since spring. An extended stretch of dry weather will accompany the cool conditions as well, which should allow many waterlogged locales a chance to dry out.

Temperatures have been running well-above-average so far through the first two weeks of October, with many cities experiencing temperature departures of 5-10 degrees above average. That has translated over to a continuous hum of air conditioning units across the South during a time when cooler weather typically limits usage to just a few hours during the afternoon. This will soon change, and some may even be tempted to turn the heat on for a brief time during the morning hours this weekend. 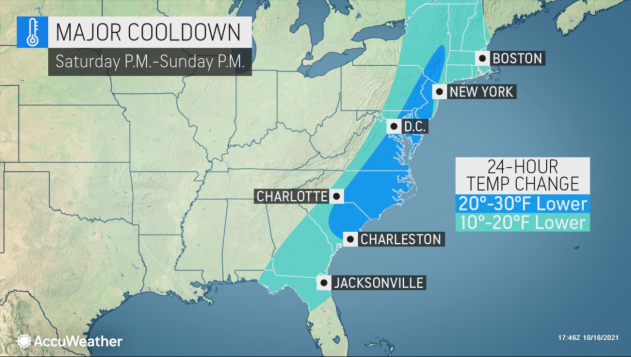 The cold front that will be responsible for the drastic cool down across the South progressed eastward through the lower Mississippi River Valley toward the Southeast coast late Saturday evening. Meanwhile, a thin line of showers and along with rumbles of thunder impacted Eastern states ahead of the cold front.

Mainly clear skies spread across a majority of the South Saturday night, allowing the lowest temperatures since this past spring for many areas. Widespread 40s infiltrated the region, with a few of the typical cold spots in northern Texas, Oklahoma, Arkansas, Tennessee and western North Carolina dipping down into the upper 30s.

Farther south near and south of the Interstate 10 corridor, low temperatures in the 50s were reported Saturday night.

As high pressure dominates the region on Sunday, it will promote dry and sunny conditions across the South. The one exception will be across central Florida, as the cold front will continue to crawl slowly southward through the Sunshine State. 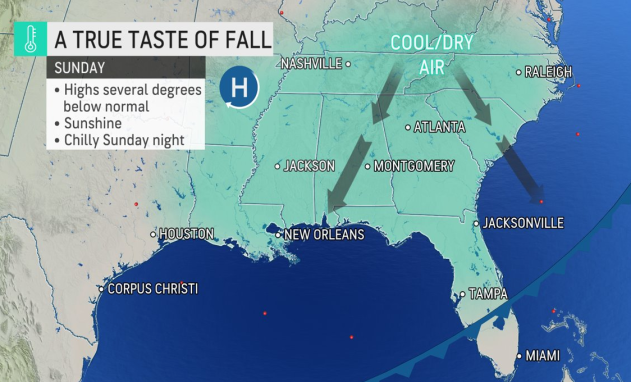 Temperatures in the lower to middle 70s are in store for places like Houston, New Orleans and Atlanta on Sunday and will prove to be perfect weather for most outdoor activities. Whether it's working on some fall cleanup around the house or heading out to a local orchard to grab a few pumpkins and some apple cider, Sunday will feature perfect weather across an expansive swath of the southern United States.

Dry and pleasant conditions will stretch right into early next week, as high pressure remains anchored over the South. A slow warming trend and continued dry conditions are expected by the middle of next week raising temperatures closer to mid-October averages. 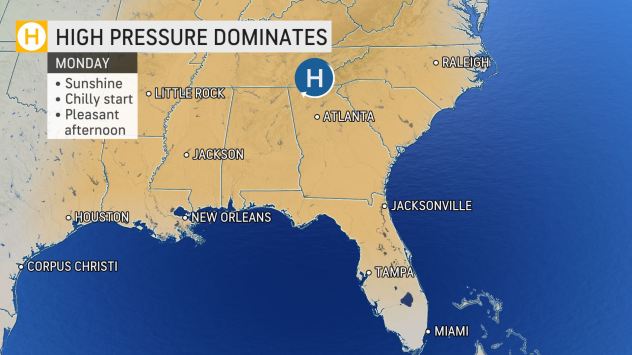 'Weather reality check' in store for Northeast after warm spell
River of moisture to propel gusty storm across Northwest
Goodbye hurricane season? With 6 weeks to go, it may be all but over