After a spring and summer spent toggling between lockdowns and loosening restrictions, only for those restrictions to come back, Europeans across the continent are hopeful that the changing of seasons will bring a return of normalcy this autumn. While any Coronavirus pandemic forecast remains a guess at best, AccuWeather meteorologists can shed light on what kind of weather conditions the continent can expect this fall. 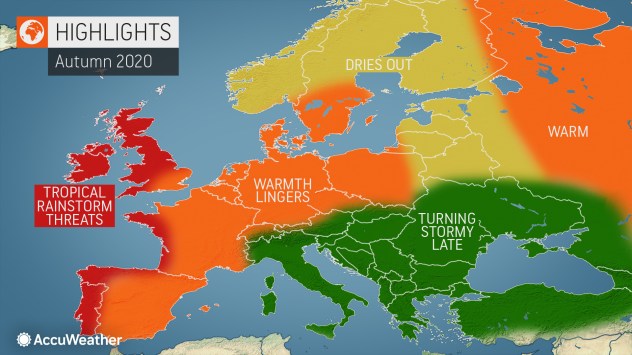 Drought has gripped numerous regions through the summer, but thankfully rain and cooler weather are on the way. Will they come to the needed regions?

Plus, how will the historically busy Atlantic hurricane season impact western Europeans this fall? A few countries could see more than their usual share of stormy conditions.

A historically active 2020 Atlantic hurricane season may be drawing more headlines in North America than Europe, but the increased number of tropical systems also means an increased chance for some of those systems to track back across the Atlantic and impact Western Europe as a tropical rainstorm. According to AccuWeather Meteorologist Tyler Roys, tropical rainstorms can impact Europe in a variety of different forms, from light winds to heavy gusts, little rain to extensive flooding.

AccuWeather Senior Meteorologist Alan Reppert added that areas of Spain, Portugal and France may benefit from those rainstorms as the lack of summer precipitation sent some regions into drought. 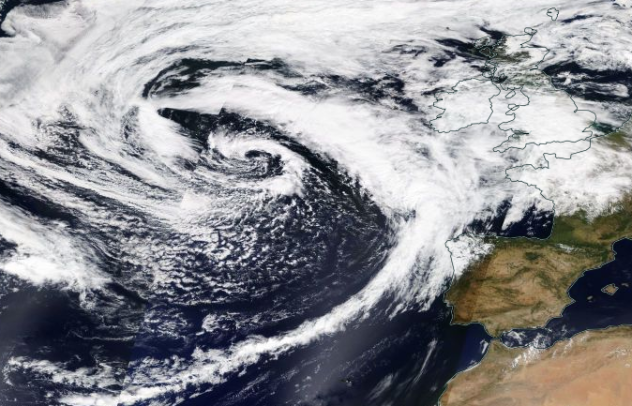 Windstorm Ellen arrived far earlier than usual when it approached the United Kingdom in August of 2020. (Satellite via NASA)

Outside of tropical impacts, a northern storm track in the first half of the autumn season will mean a higher threat for windstorms in the northwestern and western portions of the continent.

“With a northern storm track in the first half of the season, Northwest Europe (British Isles, Norway to the northern half of France and northern Germany) will see a higher threat for windstorms then the southern half of France through Portugal,” Roys said. “That doesn’t mean we can’t get a couple of impacts to southwestern Europe during this time.”

In the second half of the season, that weather pattern is expected to flip, as a more southern storm track will bring increased windstorm threats to southern France and Portugal, while threats across Germany and northern France decrease. 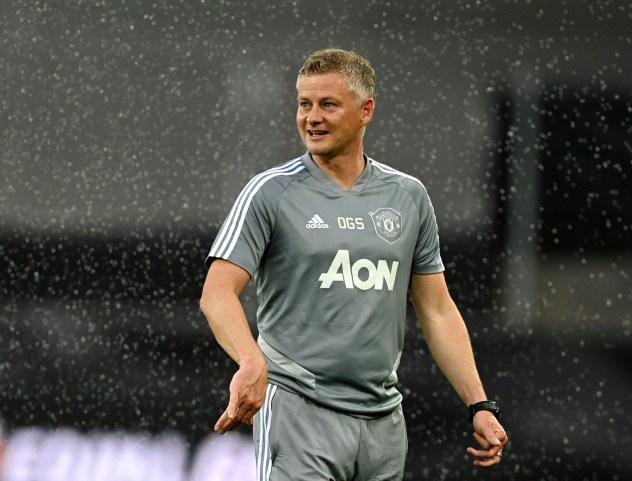 “Windstorms will have the ability to not only be big wind producers that lead to tree damage and power outages, but will also have the ability to produce flooding,” Roys said, referencing the flooding from earlier this year in the United Kingdom. He added that exposed beaches along the coast could be at risk for beach erosion.

The windstorm season, which normally runs from October to April, got off to a notably early start in 2020. On Aug. 19, AccuWeather meteorologists shared a forecast of a windstorm that was gearing up to impact the United Kingdom. Since 1990, only 11 other windstorms had ever impacted the continent in August.

The switch from summer to fall won’t be noticeable for many Europeans, as lingering high temperatures will hold through September in the western and central portions of the continent.

In Spain, the combination of heat and dry conditions could make conditions feel extra warm for the first part of fall. 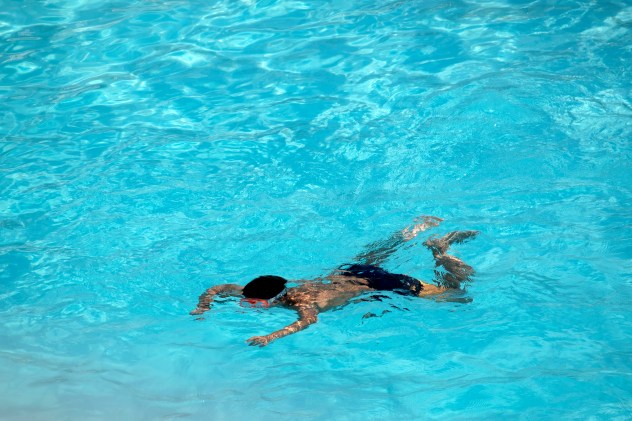 A boy swims at a swimming pool on a hot day of summer in Rivas Vaciamadrid, Spain, Friday, July 31, 2020. Spain's national weather agency says several parts of the country have set record temperatures during a heat wave. (AP Photo/Manu Fernandez)

“This could mean a couple chances for places like Paris, Frankfurt, Luxembourg. Cologne and Berlin to also top 32 degrees Celsius (90 F),” Roys said. “The last time these places did it was in the middle of September, 2016. Now, while the warmth lingers in the first half of autumn, doesn’t mean that it will be totally dry as well.”

As Reppert mentioned, areas such as Ireland and the United Kingdom could see both above-average temperatures and above-average precipitation.

“The warmth will battle the threat for rainfall and cooler weather over much of the British Isles,” Reppert said. “This will lead to a near to even a bit above average autumn for temperatures, and some areas may see well above-average rainfall as tropical systems shift to windstorms later in the season.”

Farther east, Roys said an incredibly wet summer for areas in Norway and Finland will continue into a rainier-than-usual autumn, thanks to the northern European storm track expected. The break from the rain threat won't arrive until the second half of the season, when the weather pattern flips and conditions should dry out and maybe even warm up before winter. 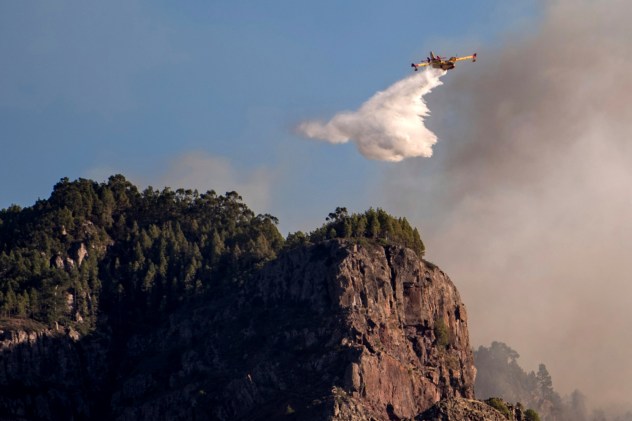 A hydroplane operates on a wildfire in Canary Islands, Spain, Tuesday, Aug. 20, 2019. The wind dropped in the Canary Islands Tuesday, allowing firefighters to make progress against Spain's biggest wildfire so far this year and raising the possibility some evacuated residents may soon be able to return home. (AP Photo/Arturo Jimenez)

While many areas in western Europe have felt the grip of a drought in the summer, it was ample rainfall in the spring that may actually cause concern this fall around the Iberian Peninsula.

"This season will also see a rather intense but short fire season as the rainfall in the spring set the stage for ample fuel for the fires," Reppert said. "Before autumn storms move in, the fire threat will be focused early in the season with much less activity later in autumn."

Farther north, Reppert said warm conditions in the United Kingdom will ward off rainy and cooler weather in the beginning of the autumn, but a shift in the middle of the season will usher in above-average rainfall later in the season.

In central and southeastern Europe, that same mid-season shift will bring wintry conditions for some locations.

"A pattern shift for the middle of autumn will bring some stormy and cooler weather through central Europe into southeastern Europe," Reppert said. "This will bring some above-average snowfall in the higher elevations of the Alps and the ski resorts. This may also bring an earlier start to the ski season for some resorts, especially in the central Alps."

Roys added that if any moderate accumulations of snow does occur in areas of the interior Balkan valleys and northern Ukraine, significant damage could occur if leaves are still on trees.

"As we move into the drier pattern across northern Europe, the threat for cold shots into Poland, Germany and even eastern France increases as they will come from the northeast," Roys said. "This in turn could lead to slightly below-normal temperatures across Germany and especially Poland, but also the Baltic States and even northern Ukraine.

And with the cold air intrusions, the threat for winter weather will return to some areas.

"With that, chances for snow will increase in places like Poland, Belarus and the Baltic States into northern Ukraine. We're not expecting above-normal snowfall, but there could be several days with fall flurries or light snow," Roys said.