The year's hottest season continues to get hotter in Canada, as AccuWeather forecasts a particularly warm summer for much of Canada in 2020. While the COVID-19 pandemic forces continued shelter-in-place orders for millions, many may appreciate the seasonable warmth and time spent safely outside, but for some provinces, that heat may arrive with risks.

A warmer-than-average summer is expected for the western portion of the country, AccuWeather meteorologists said as they released their annual summer forecast for Canada this week. Along with an expected below-normal rainfall, the mixture may be ripe for a dangerous wildfire season in British Columbia and parts of Alberta. Other regions will have to keep an eye on drought conditions.

In the eastern half of the country, far wetter weather may spur opposite problems, as higher-than-average rainfall could lead to local flooding concerns and other emerging hazards that accompany the stormy pattern. 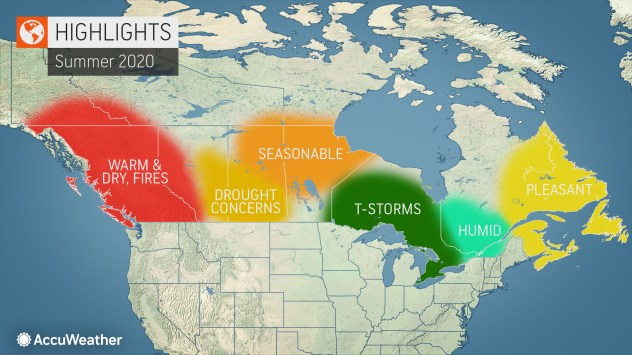 Here's a look at some notable highlights Canadians can expect over the next few months.

Despite a slow start to the fire season, conditions could rapidly change by June due to the dangerous brew that may be ripening, Brett Anderson, a veteran meteorologist who has been with AccuWeather for 31 years, said. Anderson has been leading the company's Canada weather predictions and running AccuWeather's Canadian weather blog for more than a decade.

"The summer may end up being unusually warm to hot across the west, especially from British Columbia to the Yukon Territory," Anderson said. "The combination of hotter days away from the coast and near- to below-normal rainfall may be a recipe for an active fire season." 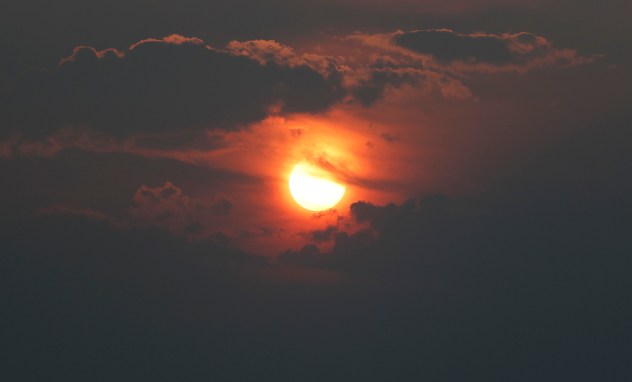 A smoky haze obstructs the sun as it sets behind the Rocky Mountains that usually can be seen late Monday, Aug. 20, 2018, in Denver. Smoke from the countless wildfires burning in western Canada as well as the American West has forced the issuance of air quality alerts across the region. (AP Photo/David Zalubowski)

That increased fire risk could lead to more difficult breathing conditions, particularly in the second half of the summer. On top of the air quality perils, below-average precipitation over the Prairies could set the scene for drought conditions to take hold.

"There is a concern for a building drought over the western half of the Prairies this summer due to a combination of dry soil and the expected weather pattern," Anderson said. 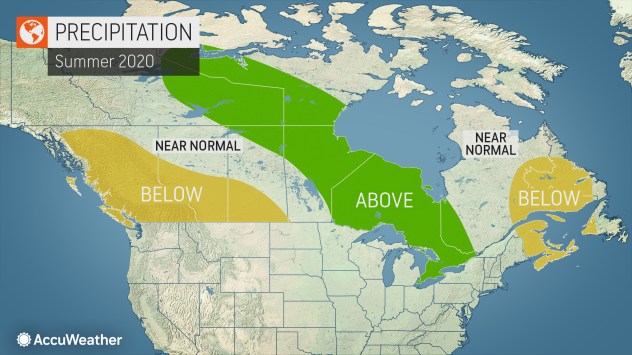 Along the Pacific coast, slightly warmer-than-normal water could lead to negative impacts on fisheries. Although water temperatures along the coastal Pacific won't reach the extremes observed several years ago, Anderson said, the warmer water this year will increase the risk of harmful algae blooms.

In 2015, record-warm waters threatened the salmon population in British Columbia, forcing officials to reduce the fishing efforts of the local industry, according to the Canadian Broadcasting Channel. The warm water not only killed off much of the food the salmon eat, but it also helped breed more predators and negatively impacted the swimming performance of migrating salmon.

A tumultuous weather pattern may lead to a particularly stormy summer for the central part of the country, particularly over the Great Lakes region. Along with an increased amount of rain, an above-average number of thunderstorms and incidents of severe weather are predicted this summer.

"This may end up being an above-average year for tornadoes across Ontario," Anderson said. "Increased warmth and humidity will be factors as these will help feed the storms."

Canada, which averages the second-most tornadoes annually in the world behind the United States, had 35 tornadoes in 2019, the fewest since 2015. Since 2010, Ontario has had more than 100 total tornadoes. According to Environment Canada, 40 to 60 twisters touch down in the country each year on average.

A hot and humid Quebec summer will mean air conditioning demands will be heightened across cities such as Montreal, especially as residents continue to shelter in place and work from home.

Average summer temperatures for the country as a whole have increased about 1.4 degrees Celsius over the past 72 years, according to Environment Canada. 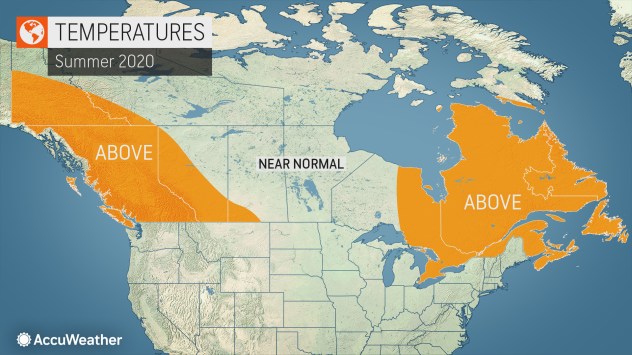 Farther east in Newfoundland and Nova Scotia, higher temperatures will not be as extreme and, along with less humid air, should lead to more pleasant conditions for the season.

Along the Atlantic coast, however, uncertainty reigns. AccuWeather forecasters are predicting a very active hurricane season in the Atlantic basin, which is expected to churn out 14 to 20 tropical storms and seven to 11 hurricanes. Four to six of the storms could strengthen further into major hurricanes -- Category 3 or higher.

The first system of hurricane season, Tropical Storm Arthur, is already in the books after developing into a tropical depression about 125 miles off Melbourne, Florida, on Saturday, May 16. The official start to hurricane season is June 1, and the next systems to brew will be given the names Bertha, Cristobal and Dolly. For other names expected this season and all tropical weather-related information, visit the AccuWeather Atlantic hurricane center.

"AccuWeather is expecting an active hurricane season in the Atlantic basin; however, it is unclear if this will lead to an increased threat of tropical storms into Atlantic Canada late this summer and into this fall," Anderson said, adding that the time to prepare is now in case tropical systems approach this season.