For the second week in a row, the Deep South has been in an SPC High Risk area for severe thunderstorms. The time to prepare is quickly waning. Read our story for additional details. 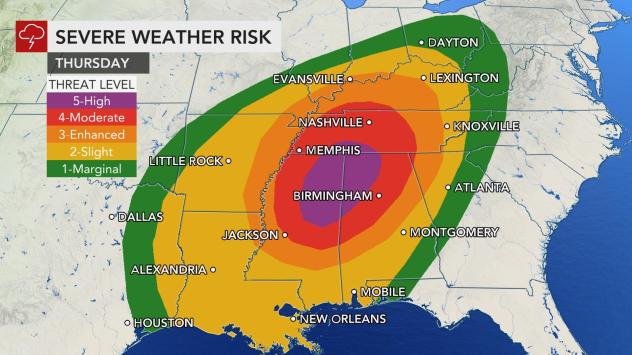 Last Wednesday March 17, almost 50 tornadoes were reported, but most were EF0 and EF1.

While that was a bit short of what you'd expect during a High Risk, today may not be. That was the first High Risk in March since 2012. Now, we've got our second, which sets a record back to 1991.

I have a bad feeling that the forecast today will not be as lucky. The HRRR weather forecast model is printing out STP (Significant Tornado Parameters) three times the top of the scale, perhaps the highest number the model has ever predicted.

I haven't independently confirmed this, and have no way to, but a meteorology student says that the HRRR Significant Tornado Parameter this AM (23) was the highest STP forecast since the model was introduced. https://t.co/AEw2bYyNaH pic.twitter.com/XKQLKzMRMU

The SPC said in the morning outlook:

"This is an uncommon, upper-echelon parameter space. In such an environment, any relatively discrete supercells will be capable of multiple tornadoes, some long-tracked and strong to violent (EF2-5 possible), with considerable destructive potential."

If that sounds familiar, it's close to a quote from the movie "Twister."

The dire forecast is being covered as far away as Japan.

When they talking about you on NHK Tokyo, you might want to keep a heads up... pic.twitter.com/EJIsr7egSy