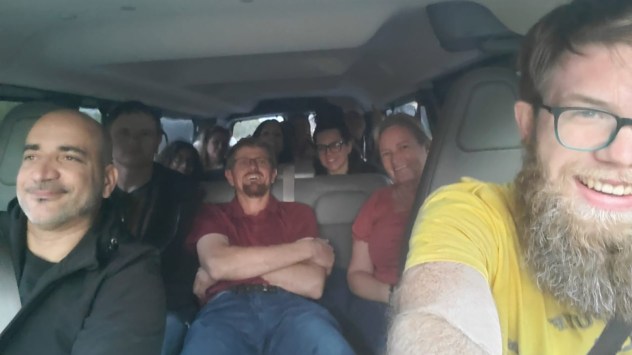 The 13 strangers came together to drive a van from Orlando, Florida, to Knoxville, Tennessee, when their flight was canceled. Here's a selfie from inside the van. (Courtesy Adolf Froese)

(CNN) -- What do you do when your evening flight is canceled, you really need to be somewhere in the morning and there are no other available flights?

In the case of 13 total strangers in Orlando, Florida, late Sunday, you hire a minivan, form an impromptu community and go on a "crazy" road trip -- taking hundreds of thousands of TikTok viewers along for the ride.

No one's quite sure exactly how it happened.

Michelle says it was her vision, but everyone else made it a reality. Carlos thinks it was Amy's idea, but he put down the credit card. Carlos' partner Laura says she'd never normally do anything like this. Laura's daughter Mikayla was in disbelief.

"When they first told me, I looked at them like they were crazy. I'm like, 'You want to get into this big van with a bunch of random strangers?'" Mikayla tells CNN Travel.

It was Sunday night at Orlando International Airport in Florida. An evening Frontier Airlines flight to Knoxville, Tennessee, had just been canceled. Stranded passengers were searching on their cell phones for other flights and lined up to speak to harried airport staff.

Michelle Miller, an influencer known as @thefarmbabe, was set to present at a conference in Knoxville on Tuesday. Carlos Cordero and Laura Puckering were taking their 17-year-old daughter Mikayla Puckering to tour the University of Tennessee. One passenger was heading to a custody battle. Someone else was helping a friend move to Mexico. Others just wanted to get home.

The travelers were from all over the U.S. and beyond. They had one thing in common: their flight got canceled, and they wanted to travel that evening.

When the idea first started brewing to hire a van and drive overnight to Knoxville, Carlos and Laura said no. It sounded exhausting.

But then the couple saw their daughter Mikayla's face, crushed at the idea of missing the tour of her dream college.

"She had tears in her eyes," says Laura.

They approached another passenger, Amy, who'd been talking about the idea of hiring the van.

They didn't have any hesitations after that, says Carlos.

"We got a really good vibe, because these are regular normal wholesome people trying to get home and having things that they need to take care of."

The gang of stranded passengers went downstairs to the car rental area. Carlos spotted Hertz had no lines, so he headed over. He was offered a 15-person van.

"So we rented it. And the rest is kind of history," he says.

As the group waited for the van, one of the passengers, Alanah Story, a twentysomething college graduate who works in media, started filming for her TikTok.

On the video, Alanah asked stranded passengers to introduce themselves and to explain how they'd found themselves stranded, and why they were renting a van with a bunch of strangers to drive across the country.

"If I thought that this was crazy, I knew other people might think it's crazy also," Alanah tells CNN Travel. "And so I just figured, this is a very unique bunch of people, we're all very different. So I don't know, maybe other people would want to see it too, because things like this just don't happen on the regular."

In the end, 13 stranded passengers joined the unexpected road trip.

"Thirteen of us plus luggage, it fit perfectly," says Michelle. "And we all just climbed aboard, and we're on our way."

It was around 9:30 p.m. when the group got on the road. They numbered themselves -- one to 13 -- so that whenever they stopped at a gas station for a bathroom break, they could make sure they'd rounded everyone back up again.

Carlos offered to kick off the driving.

"We made a plan: I was supposed to drive one or two or three hours. And then Amy was supposed to take it over -- number five -- and then I believe Michelle -- number 13 -- she volunteered as well," says Carlos.

In the end, Carlos did most of the driving, fueled by what he calls "the strongest cappuccino" from Dunkin' Donuts. For the first hour or so, another passenger -- Seth -- kept Carlos awake and alert with his stories about his job as a minister. Amy checked in on him throughout the journey, and later took over for an hour or so when Carlos needed a power nap.

In the back, some of the passengers talked about their lives, families and jobs. Other travelers attempted to sleep. But something was happening online -- Alanah's TikTok was gaining traction. People were commenting in droves, intrigued by the strangers who'd banded together to drive across the country. It was like a Hallmark movie, they insisted. The TikTok community was keen for an update.

"We were just reading the comments from people and we were laughing and we didn't expect this. It was like one million views after a few hours," says Laura. "We were like, 'What is going on?'"

On one of their gas station stops, three hours in, Alanah filmed an update. This time, the group leaned into the "this could be a movie" of it all.

One passenger, Q, joked that he, as the sole Black man in the group, would be the one to "die first," a nod to horror movie tropes. One of the passengers, Mexican farmer Adolf Froese -- who, along with his colleague Johan, had been dubbed "definitely Russian spies" by the commentators -- spoke entirely in Spanish.

Meanwhile, Michelle said she was only here for the snacks, and Alanah's mother Renee joked about stopping at the liquor store. The video started racking up views. It seemed like everyone could relate to someone in the van. Everyone was invested in their journey.

"We all were so different. And I think a big part of why people like it so much is because you could literally see our differences in real time," says Alanah.

"We were like a big dysfunctional family," says Michelle. "It was fun."

From strangers to friends

"Everybody was so awesome. It almost went too perfect," says Carlos. "There was no traffic. Everyone got along, everyone pitched in. It was just seamless.

"It took collective effort. Everybody really had their own thing going on. But everybody cared about one another's ventures and responsibilities."

The only bump in the road was Michelle insisting on multiple bathroom breaks, which Alanah's mom Renee joked about in Alanah's final TikTok.

"That was all in good fun," says Alanah.

When they pulled up in Knoxville, the group went their separate ways.

Alanah and Renee headed back home. Michelle realized she was actually attending the same conference as not-actually-spies Johan and Adolf. And Mikayla, Carlos and Laura made it to the University of Tennessee just in time. They were greeted as minor celebrities -- many people at the college had heard what happened and followed the online updates. The college treated the family to lunch on the house.

A couple of days later, the group is still processing what happened. Laura says every time she thinks about the way the 13 strangers came together, she finds herself tearing up with gratitude.

She does caution that it's important to follow your intuition and exercise caution in this kind of situation -- "I don't want to make people think they can just get in a car with strangers," she says, adding she felt more secure in the situation because she was with Carlos, and he was driving.

But she says she's heartened by the experience.

"I take away the fact that there are some really good people in this world. We were all different cultures, we were different backgrounds. It couldn't have gotten more perfect. So I don't have any regrets. No regrets whatsoever."

Her words are echoed by Alanah.

"I feel like this situation for me specifically kind of restored my trust and humanity a little bit," says Alanah. "There's definitely hope for people -- people, they can be good. And also, if you get the opportunity to go on a crazy adventure, you should take it, because you never know what's gonna come out of it."

Meanwhile, Carlos suggests the experience is a reminder of the importance of trying to "roll with the punches" when you can, especially while traveling, and to take a positive outlook on the tough and unexpected situations which will inevitably crop up from time to time.

"Things happen that none of us want or can control," he says. "Don't let the small stuff affect you. And you make the best of it."

After all those hours in the van, the group went from strangers to friends. Alanah is going to karaoke with Q on Thursday. Michelle and Laura hope to hang out next time they're in Orlando. Amy invited all 13 stranded passengers to visit her at her home in Mexico.

"Throughout the ride, I kept on saying, everything happens for a reason," says Mikayla. "If we would have went on that plane, none of this would have happened, we wouldn't have met these people."