How one researcher in Qatar is helping keep the World Cup cool, literally

Saud Ghani, a professor of mechanical engineering at Qatar University, was asked a key question when Qatar bid to host the 2022 World Cup: How is it possible to keep thousands of people cool in the desert?

Ghani, who has earned the nickname “Dr. Cool”, told FIFA in 2019 that he provided an answer that would end up being a key component of Qatar’s bid and help the country become the first Middle Eastern nation to host the World cup.

"When we were preparing our submission for the World Cup in 2022, we wanted a unique bid that would stand out among other bidding countries,” Ghani said. “Most countries would usually present their stadiums as a design idea and not a technology. We presented our stadiums in a new way – as a technology."

This technology has kept players and fans cool and comfortable across seven out of the eight Qatari stadiums during the tournament's group stage.

The World Cup is usually hosted during the summer months, but to accommodate for Qatar’s extreme heat, it was moved to November this year. Nevertheless, residents and visitors have been faced with above-normal warmth with highs regularly climbing above the average of 80 F during the first two weeks of competition.

Ghani came up with the idea of using a combination of insulation and what he calls “spot cooling”, which refers to cooling taking place only in the areas where people gather. The stadium, additionally, keeps a “bubble” of cool air inside, acting as a barrier against the outside air and winds. 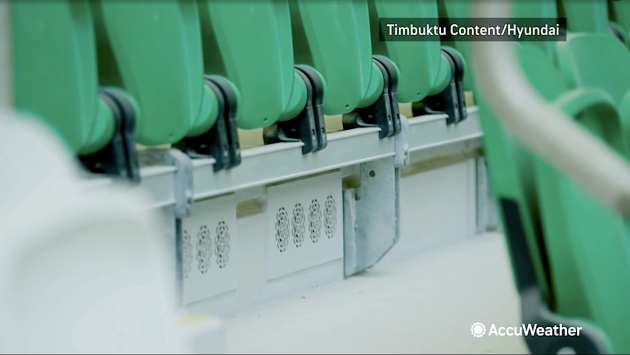 There are grills under all of the seats in the stadiums that push cool air into the stands.

The challenge, however, was not only the weather but also the heat produced by 40,000 people inside the stadium as well. Ghani told Reuters the average person puts out roughly the same heat as two laptops.

“And at the same time, we are breathing, we are sweating and we are cooling ourselves by sweat,” Ghani said. “So we put a lot of moisture in that environment. So I cannot put 40,000 people, which is roughly 80,000 laptops [worth of heat,] in a space for four hours without giving them a sort of ventilation.”

Ghani achieved his goal by creating ventilation systems for each stadium adapting to each of their designs. Using 3D printed models and wind tunnels at Qatar University, Ghani told Reuters he looked at the weather data for Doha, the country's capital, for the last 30 years and studied how the infiltration of wind would interact with the stadium.

The technology uses solar-powered energy to cool air and push it into the stands through thousands of grills under the spectators’ seats and through large nozzles on the pitch side. An air circulation technique then allows the cooled air to be drawn back, re-cooled, filtered and pushed out again.

According to FIFA, the stadium needs to be cooled two hours before an event, and Ghani said this also provides better air quality for fans, players and even the field's grass. 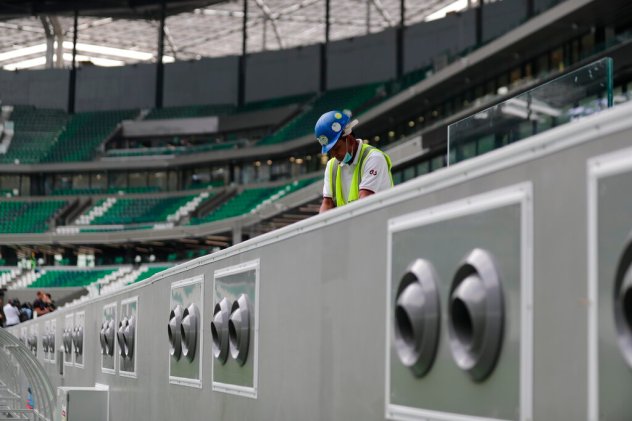 A worker cleans over a giant air conditioning system at the Qatar Education Stadium, one of the 2022 World Cup stadiums, an open-cooled stadium with a 45,350-seat capacity in Doha, Qatar, Sunday, Dec. 15, 2019. (AP Photo/Hassan Ammar)

"We are not just cooling the air, we're cleaning it," Ghani told FIFA. "We're purifying the air for spectators. For example, people who have allergies won't have problems inside our stadiums. We have the cleanest and purest air there is."

Due to its proven effectiveness, this technology is now taking over the agricultural field. Ghani told Reuters they have discovered that insulating greenhouses in the middle of the desert with solid walls also work as a closed circuit, quite similarly to the stadiums.

"Now we have the better future for farmers in Qatar," Ghani said.

"The farms are increasing in production and in number,” he told Reuters. “So if we have the right technology, if we choose the right crop, and the right material that we use -- some sort of soil or intermediate that we grow these plants -- I think there is nothing impossible to achieve our goals." 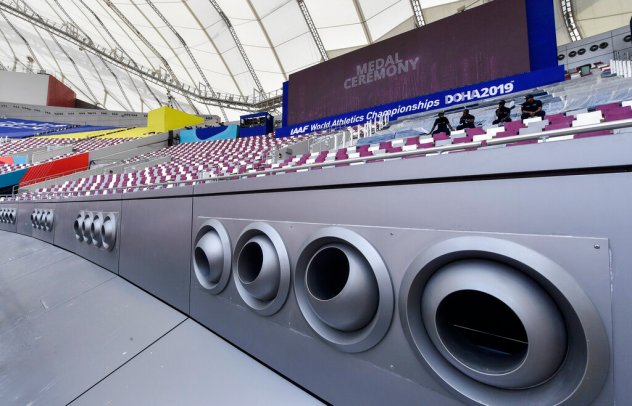 Ghani has expressed and demonstrated his passion for zero-emission power, which is also why he has decided to keep this technology unpatented. He told FIFA this could be a “game-changer for countries with hot climates,” thus he feels proud to let this be one of Qatar’s gifts to the world.

Ghani’s innovation was first brought to life to support Qatar’s plan to host the 2022 World Cup in 2017 at Qatar’s only pre-existing stadium, Khalifa International Stadium, when it was renovated to include Dr. Cool’s technology. The other six permanent stadiums were built from scratch with these air-cooling designs in mind. Ghani said none of these infrastructures are intended to become white elephants, referring to properties that require a lot of care and expense while yielding little to no profit.

"We didn't want white elephants, so we did not design these stadiums, by the way, only for the World Cup. They are only serving the World Cup, but they are designed with the legacy," Ghani told Reuters.

Visitors spending time in Qatar will continue to experience warm air during the next couple of weeks. The tournament will conclude on Sunday, Dec. 18, with the World Cup final.

The massive, gleaming stadiums that have been constructed throughout Qatar have also been a source of international outrage and controversy. World Cup chief Hassan Al-Thawadi said that between 400 and 500 migrant workers have died as a result of work done on projects connected to the tournament, CNN reported.

"I don't have the exact number, that's something that's been discussed. One death is too many, it's as simple as that," Al-Thawadi said in an interview with Piers Morgan.

However, The Guardian reported last year that 6,500 South Asian migrant workers had died in Qatar since the country was awarded the World Cup in 2010. According to The Guardian, most of them were involved in low-wage, dangerous labor, often undertaken in extreme heat, but Al-Thawadi disputed that figure as a "sensational headline."