Saturday night cold: Playoff game will be among the most frigid in NFL history

Only a handful of games in post-season history have been played in weather colder than the matchup set to take place in Buffalo. Here's how one of the NFL's most rabid fanbases prepares for the unforgiving conditions.

AccuWeather's Tony Laubach reported live from Buffalo on Jan. 14, amid lake-effect snow, about the intense cold expected to affect the Patriots-Bills game on Saturday.

Highmark Stadium in Orchard Park, New York, is home to some of the most hardened fans of one of the National Football League's most tortured franchises. The Buffalo Bills have had more Super Bowl misfortune than any other team, yet their superfans, lovingly nicknamed the Bills Mafia, continue to show up week after week in all sorts of weather.

Even after the seasons change from fall to winter, members of the Bills Mafia show up annually in some of the worst weather conditions football can possibly be played in. As the playoffs begin in January and the intensity of games increases, the temperatures in Buffalo plummet and fans get creative to stay warm.

For Sean Reardon, this game will be unlike any other he's ever attended.

"I was at the 2008 Buffalo Bills and Patriots game where the wind was extremely crazy. The goalposts were blowing down, part of the training center roof blew off," Reardon recalled in an interview with AccuWeather. "That weather was nuts. That was cold, wicked windy, but nothing like what I’m imagining the temperature is going to be like on Saturday." 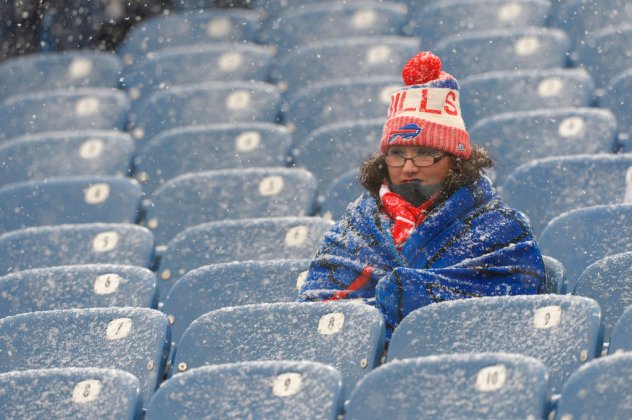 A fan sits in the snow before an NFL football game between the Buffalo Bills and the Indianapolis Colts, Sunday, Dec. 10, 2017, in Orchard Park, N.Y. (AP Photo/Adrian Kraus)

By Reardon's estimation, he's attended well over 50 games in his life. But this Saturday will be his first-ever playoff game, as his Bills play the New England Patriots. Reardon, 41, who resides in Binghamton and played college football at nearby St. John Fisher College in Rochester, told AccuWeather that he expects this weekend's game to be unique.

Indeed, Saturday's first-round matchup between the Bills and Patriots will be unique in that it stands to likely be among the coldest-ever NFL post-season games. It will fall short of some other memorably frigid playoff games, but only a small handful of post-season games in NFL history have had lower temperatures during the game.

Like the Bills, the Patriots are no strangers to playing in winter weather. New England’s dynastic run under head coach Bill Belichick began in a snowstorm began almost exactly 21 years ago in a game that was nicknamed the Snow Bowl (or for some, the Tuck Rule Game). Battling the Oakland Raiders, Belichick’s Patriots won on an overtime field goal in howling winds and fiercely falling snow -- a result that lives in infamy. 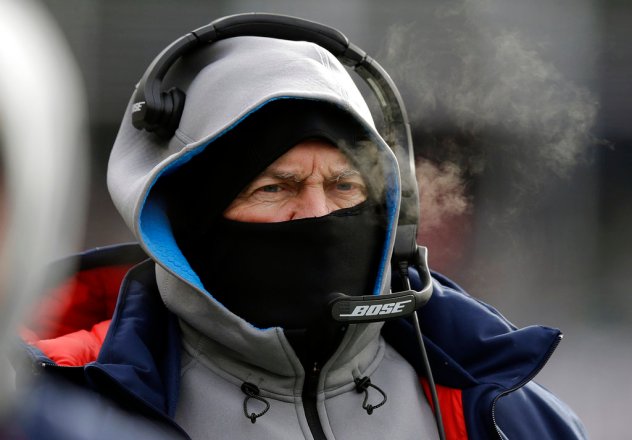 New England Patriots head coach Bill Belichick watches from the sideline while bundled against the cold weather during the first half of an NFL football game against the New York Jets, Sunday, Dec. 31, 2017, in Foxborough, Mass. (AP Photo/Charles Krupa)

According to AccuWeather Meteorologist Renee Duff, Reardon and the rest of Bills Mafia will need to prepare for the worst of the cold.

"Although the lake-effect machine has been cranking recently around Buffalo, New York, no snow is in the forecast for Saturday night’s game, but bitter cold is a guarantee," Duff said. "Temperatures are expected to remain around 3-4 F throughout the game, and while there won’t be much wind, a slight breeze will push AccuWeather RealFeel® Temperatures below zero at times."

AccuWeather forecasters say the temperature in Orchard Park won't make it out of the single digits for a high on Saturday. A game-time temperature of 4 degrees or lower at Highmark Stadium would put the game among the top 10 coldest ever NFL playoff games, according to Stathead, a sports research database.

A mark of 4 degrees would make it the second coldest NFL wild-card round playoff game of all time -- second only to the matchup between the Seattle Seahawks and Minnesota Vikings in 2016, which was 6 degrees below zero at kickoff. Moreover, a game-time temperature below 8 degrees would make this game the second-coldest Bills home game in franchise history, behind only the 0-degree kickoff temp on Jan 15., 1994, for a playoff game against the then Los Angeles Raiders. At that point, the Bills' home venue was known as Rich Stadium.

To prepare for those single-digit conditions, Reardon has been busy all week gathering the exact clothes and supplies to survive the unforgiving elements. 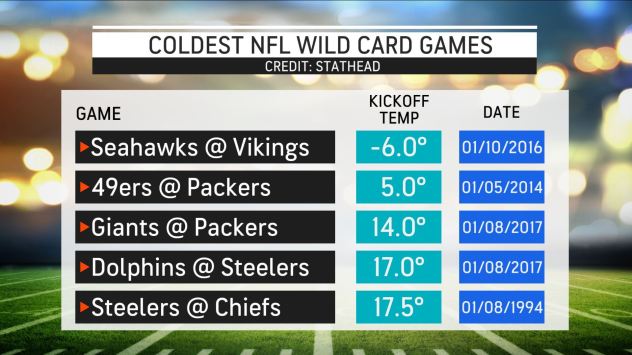 For Christmas, he was gifted a big, bulky winter coat that he wasn't sure would ever get much use.

"And then my buddy who has season tickets texted and said, ‘We have four tickets if you guys want to go to this game,’ and I was like, ‘That coat is going to come in handy!’" Reardon said with a laugh.

From there, he also went straight online to shop for some winter essentials.

"I hit up Amazon pretty hard on Monday and ordered heated electric socks, fleece-lined pants," he said. "We’re on the group text trying to plan who’s going to bring the generator, some Salamander heaters, plastic to wrap around our popup tent to create a heated hut in the parking lot to try and stay warm before the game."

For perspective with enduring the weather, Reardon said he thinks of his grandfather, who fought in the Korean War and in the historically frigid Battle of the Chosin Reservoir.

"My grandfather fought in the Korean War in the Battle of the Chosen Reservoir and it was negative 35 degrees," Reardon said. "I’m going fully layered up, drinking beer and watching the Buffalo Bills. It's completely different and exciting." 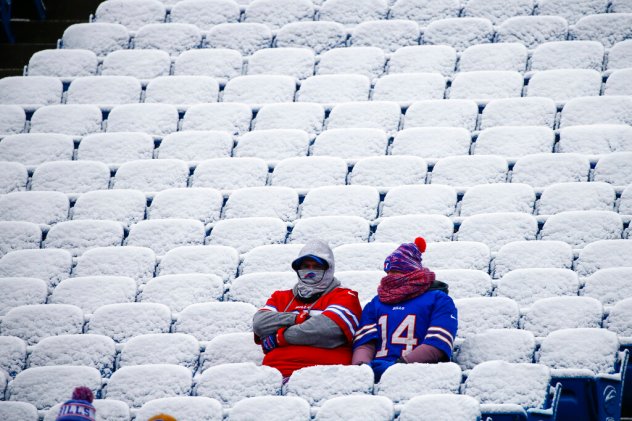 Like many other Bills Mafia members, the cold also won't put any damper on Reardon's game day activities, which includes tailgating beforehand.

After all, this has been a long time in the making.

Prior to the 2020 season, the Bills hadn't hosted a home playoff game since 1996. Reardon, who has been attending games with this friend group since 2005, said there's a lot to celebrate this weekend.

"This is the first time all of us are going to be able to get together for a game like this. As a Bills fan, during the last 20 years, most of the games we’ve gone to have been relatively meaningless," he said. "Last year they had two home playoff games, but attendance was limited due to the pandemic, so there’s a lot to celebrate for us."

According to Reardon, Buffalo fans are there for the full experience no matter the conditions. Whether it's greeting the team at 4 a.m. at the airport terminal or jumping through plastic tables, a tradition the Bills Mafia has become famous for, the fanbase is one big welcoming family.

"The Bills Mafia fanbase is an extremely caring fanbase and we protect our team, we support our team no matter what the weather is," he said.

However, Reardon made sure to mention that he won't be doing any table jumps himself.

"There is 100 percent certainty that I will not be jumping through any tables," he said. "I have a 2-year-old daughter, I am 41 years old and I already spend enough time at a chiropractor to make sure my golf game stays where it needs to be, so I personally will not, but I will enjoy anyone that does."

What's it like playing football in snow? Former NFL players weigh in

Building heat to set records in southwestern, south-central US