World's most powerful radar telescope at Arecibo will be scrapped

ORLANDO, Fla., Nov. 19 (UPI) -- The iconic 18-acre radar telescope at Arecibo Observatory in Puerto Rico cannot be salvaged after it was damaged by broken cables and will be demolished, the National Science Foundation announced Thursday.

The damage from cable breaks in August and early November has left the radar dish and surrounding structures unsafe and subject to further collapse at any time, foundation officials said.

"We're actually taking measures to preserve their people and assets to ensure the facility does move forward in some fashion," said Ashley Zauderer, program director in the Division of Astronomical Sciences at the foundation.

Ancillary facilities at Arecibo that also conduct astronomical observations may be salvaged, but the central structure, the large radar telescope, will either fail on its own or be demolished as safely as possible, Zauderer said. 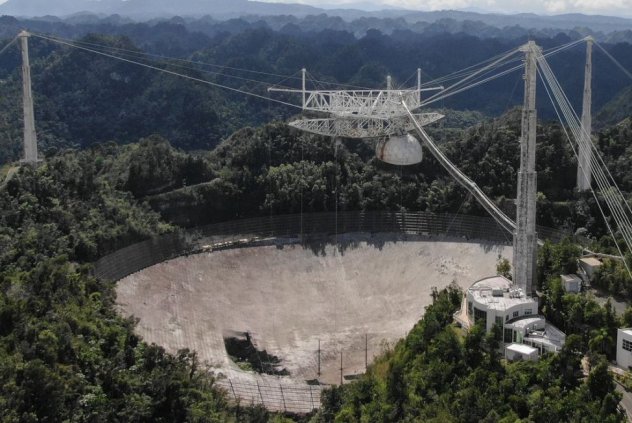 A damaged radar dish is shown in a photo taken by a drone after a main cable broke at the Arecibo Observatory in Puerto Rico on Nov. 6, 2020, Photo courtesy of University of Central Florida

"The decision comes after [the foundation] evaluated multiple assessments by independent engineering companies that found the telescope structure is in danger of a catastrophic failure and its cables may no longer be capable of carrying the loads they were designed to support," a statement from the foundation said.

The telescope has been the scene of ground-breaking science and astronomy discoveries for 57 years. Two scientists using data from the dish have won Nobel Prizes. It was also the scene of popular movies like 1995's GoldenEye and Species, and 1997's Contact.

The University of Central Florida, which manages the facility, had recently submitted a request to the foundation for $10.5 million to begin repairs on the August damage. That work would include at least six massive cables, which range in thickness from 3 inches to 6 inches.

But that work hadn't begun when a second larger cable broke.

"Our team has worked tirelessly...looking for ways to stabilize the telescope with minimal risk," UCF President Alexander Cartwright said Thursday in a statement.

"While this outcome is not what we had been working toward, and we are disheartened to see such an important scientific resource decommissioned, safety is our top priority," Cartwright said. 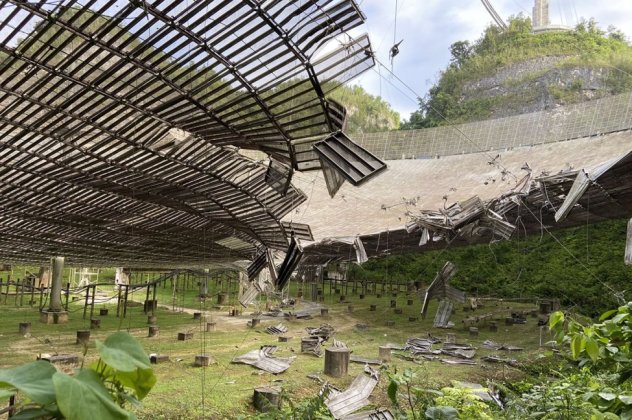 The world's most powerful radar telescope at Arecibo Observatory in Puerto Rico is unsalvageable and will be demolished due to damage created by broken cables in August and November, the National Science Foundation announced Thursday. File Photo courtesy of University of Central Florida

The cables support a six-story structure and platform suspended above the dish, which houses the world's most powerful radio telescope transmitter and other instruments. When functioning properly, the observatory can beam radio waves at asteroids and other space objects, obtaining images and data as the waves bounce back to Earth.

Among the vital science conducted at the facility is the tracking of near-Earth objects -- comets or asteroids that could collide with Earth and destroy large regions.

The telescope "has allowed NASA to fully characterize the precise orbits, sizes and shapes" of such objects after they are discovered by a different technology, known as a wide-field optical telescope survey, NASA said Thursday in a statement.

"NASA respects the National Science Foundation's decision to put the safety of those who work, visit and study at the historic observatory above all else," NASA stated. 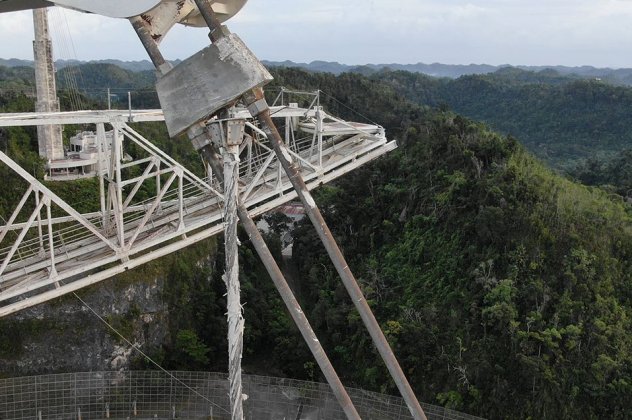 A damaged cable is shown in a photo taken by a drone after a main cable broke at the Arecibo Observatory in Puerto Rico on November 6, Photo courtesy of University of Central Florida

The observatory has been a tourist attraction and education center for decades on the Caribbean island. The foundation intends to continue funding certain aspects of the facility, including its visitor center.

The Arecibo location has a unique bowl-shaped valley that was considered ideal for the construction of a large dish when scientists with Cornell University scouted for a telescope site in the 1950s.

The observatory, the foundation and UCF should consider possible future uses for the site, leaders of the U.S. House Committee on Science, Space and Technology said in a statement.

"Moving forward, we encourage [the foundation] to continue its support for the Angel Ramos Foundation Science and Visitor Center as an active hub of...education and outreach programming in Puerto Rico, and to explore opportunities to use the site for exciting new science in the future," committee Chairwoman Rep. Eddie Bernice Johnson, D-Texas, and ranking member Rep. Frank Lucas, R-Okla., wrote.