If you live in a portion of northern and eastern New York State, New England or the Maritime Provinces of Canada, mark Friday, June 19, on your calendar. That morning the moon will rise with the brilliant planet Venus hidden behind it.

Shortly after the moon clears the east-northeast horizon, Venus will dramatically emerge into view, the end of what astronomers refer to as an "occultation." Both objects will be crescents at the time, the moon being 4% and Venus 8% sunlit, adding to the beauty of the event for those having small telescopes. 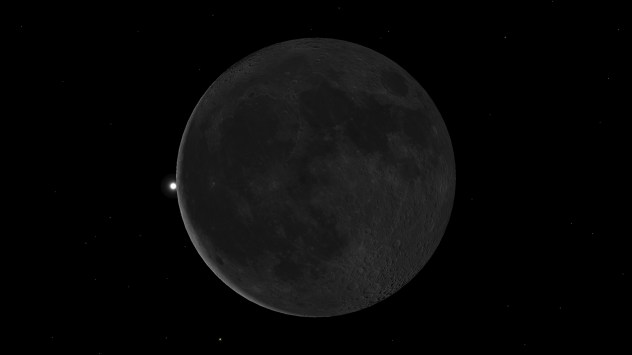 When the moon occults Venus on June 19, 2020, the "morning star" will disappear behind the moon's lower limb when the pair are still below the horizon for most observers. However, lucky skywatchers in the northeastern U.S. and Canada can see the occultation from beginning to end. (Image credit: SkySafari app)

But what if you live elsewhere? It still will be worthwhile setting your alarm clock for about an hour before sunrise to have a look. Rather than partake of the usual "inside the eyelid show" at that somewhat ungodly hour, you will be rewarded instead with a view of a beautiful celestial rendezvous as a slender crescent moon appears in close proximity to the brightest planet in our sky.

Scientists found volcano-like features in the polar regions of Saturn’s moon Titan and say they “could be evidence of explosive eruptions that may continue today.”

Early risers who are normally up an hour or so before sunrise, and who are unaware or have no advance notice, will almost certainly wonder, as they cast a casual glance toward the skinny moon that morning, what that "large silvery star" happens to be. Sometimes, such an occasion brings with it a sudden spike of phone calls to local planetariums, weather offices and even police precincts. Not a few of these calls excitedly inquire about "the UFOs" that are hovering closely in the vicinity of Earth's natural satellite.