Scientists unveil highest resolution images of the sun ever captured

Researchers in Maui, Hawaii, were able to record the sun's boiling surface in the highest detail to date on Jan. 30, by using a four-meter solar mirror.

In new videos from the National Science Foundation (NSF), the sun's surface can be seen close-up in the highest resolution yet.

The footage was taken with the NSF’s Daniel K. Inouye Solar Telescope, one of the federal agency's most powerful telescopes that is perched at the top of Haleakala Observatory on the Hawaiian island of Maui. It shows details of the sun’s surface that are as small as Manhattan Island -- the most granular features to ever be captured of the sun’s surface.

The movie, which was released this week, was captured at a wavelength of 705 nanometers for 10 minutes, reveals "unprecedented detail of the sun’s surface" and "will enable a new era of solar science and a leap forward in understanding the sun and its impacts on our planet," the NSF said in a statement. 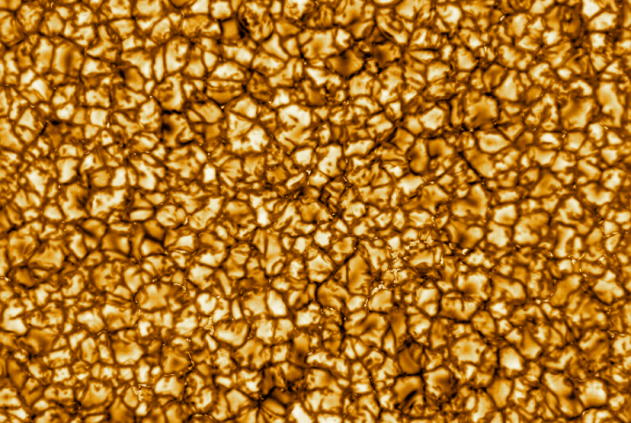 Scientists have been able to capture photos of the sun's surface in the past, but never at this resolution. (NSO/NSF/AURA)

The movie shows images of cells pulsing due to the rising, cooling and sinking of hot plasma, a process known as convection. Each plasma cell is the size of Texas, according to Thomas Rimmele, the telescope's director.

“It’s like if you watch a pot of boiling water," Rimmele told AccuWeather. "You see these convection cells in the boiling water change over time, and this is what you see on the sun as well.”

He said scientists have been able to capture photos of the sun's surface in the past, but never at this resolution. This telescope, however, is the first to provide ongoing measurements of magnetic fields in the sun’s atmosphere.

Corey Powell, science writer, former editor in chief of Discover Magazine and co-host of the Science Rules podcast with Bill Nye, said the reason scientists have had so much difficulty in observing the sun up close like this in the past is due to the brightness and close proximity to Earth.

He shared the video on Twitter, saying, "Even at this fine resolution, the scale is enormous."

This is the sharpest movie of the Sun ever made. Even at this fine resolution, the scale is enormous; each plasma cell here is about the size of Texas. https://t.co/0G1VI3hrhi via @NatSolarObs pic.twitter.com/JYSDw1Grx6

"That one patch of the sun is bigger than the entire earth," Powell said.

One of the biggest challenges that comes with studying the sun, according to Rimmele, is how much heat the telescopes collect, as they are essentially giant magnifying glasses directing heat into a very small area. To mitigate the effects of this, they must use thermal control techniques like producing swimming pools full of ice at night to cool down the telescope during the day. They also have seven-and-a-half miles of pipes running through the facility to help keep the massive instrument cool.

The Inouye Telescope holds the world’s largest mirror for a solar telescope at 13 feet. The telescope also has the largest aperture — an opening that allows light to travel through — of any solar telescope.

With the sensitivity of this telescope, scientists will be able to see the magnetic fields at a much smaller scale and measure them "very precisely," which will eventually help to build models similar to weather models on earth that could predict solar events.

He called the videos "just the tip of the iceberg" of magnetic fields.

“We use technology everywhere, it's very much impacted by space weather, and space weather originates on the sun and with its magnetic field,” Rimmele said.

When solar activity hits Earth, it can lead to aurora displays. However, it can also cause disruptions in everyday life in ways like delaying air travel and interfering with GPS services and fry satellites. 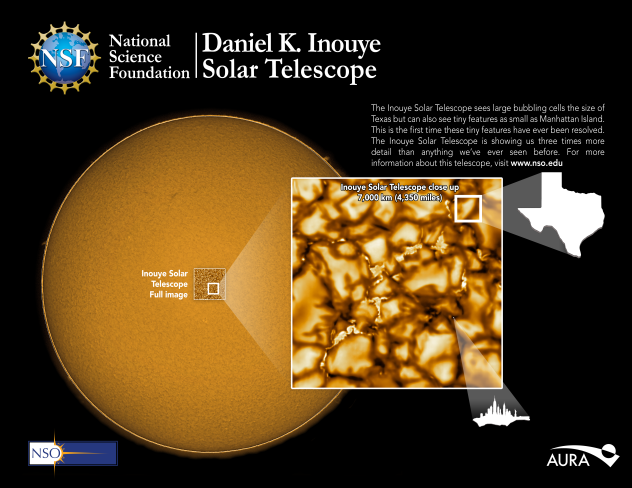 The Daniel K. Inouye Solar Telescope holds the world’s largest mirror for a solar telescope and the largest aperture. (NSO/NSF/AURA)

“We live in the outer atmosphere of the sun and, if the sun has a hiccup like one of these solar eruptions, it impacts us," he said.

Powell said the results of solar storms are oftentimes "manageable," but there are solar storms about every hundred years that have the ability to cause major consequences.

He recounted an example of a severe solar storm in 1859 that resulted in all the telegraphs in the world shutting down, with some even sparking so much the operators had to step away from them.

Powell said if a solar storm at the same intensity as the one in 1859 were to happen today, with the larger amount of electronics that are now present, it could cause a global blackout and cost a trillion dollars in damage due to the shutdown of the internet and stock market.

"We've never experienced the worst of what the sun could do," Powell said.

The physics behind solar eruptions, Rimmele said, is what the scientists are after, which will help in learning more about the impacts on Earth.

The telescope project began more than a decade ago and, over the next eight months, will go through a testing period. According to the National Solar Observatory (NSO), the telescope will not be up to its full capabilities for months — possibly years — but even now it has been able to provide the highest resolution images of the sun ever taken.

The telescope has an expected lifespan of 44 years, and according to NSO, “It promises to revolutionize our understanding of the sun forever.”

In a tweet heralding the photos, the NSF said the telescope will "collect more information about our sun during the first 5 years of its lifetime than all the solar data gathered since Galileo first pointed a telescope at the sun in 1612."

"It’s the sun, you see it every day, there’s no mystery about it," Powell said "And then you look at it through this telescope, you see these images and you realize, ‘Oh I had no idea what the sun looked like.”’

Rounds of severe storms to charge through Northeast Why has western heat been so intense? It boils down to 5 reasons