This year's Orionid Meteor Shower, on the night of Oct. 20-21, will, unfortunately, be contested by a near-full moon. But you can still find meteors on this night. We'll explain how.

Autumn is sometimes referred to as meteor shower season, as there are several showers that peak on the crisp fall nights, but this week’s Orionid meteor shower could have some competition.

October’s Orionid meteor shower is not only popular because it is typically one of the best meteor showers during autumn, but also because of its origins.

Meteor showers occur when the Earth plows through a field of debris left behind by an asteroid or comet, and the parent comet for the Orionids is none other than Halley’s Comet.

Halley’s Comet will not return to the inner solar system until 2061, but viewing the annual Orionids is another way to enjoy the famous comet. 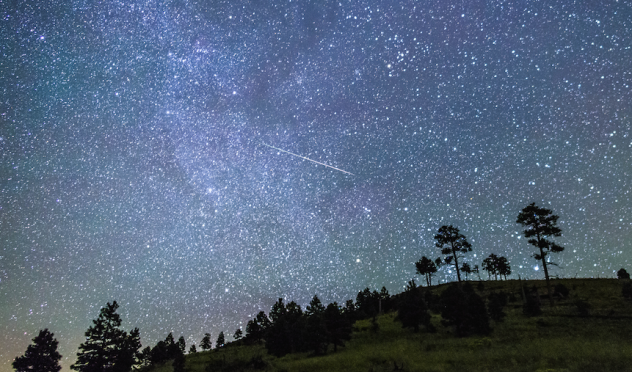 The culmination of the Orionids is set for the night of Wednesday, Oct. 20 into the early morning of Thursday, Oct. 21, according to the American Meteor Society (AMS).

The shower gets its name from the constellation Orion, as meteors appear to originate from this part of the sky. However, shooting stars will be visible in all areas of the sky, not just near the radiant point.

Knowing where the radiant point is located in the sky is still important though because the higher it is in the sky, the higher the frequency of meteors will be. In the case of the Orionids, the radiant point will reach its highest point in the night sky in the hours before dawn, so the best time to watch the event will be during the second half of the night. 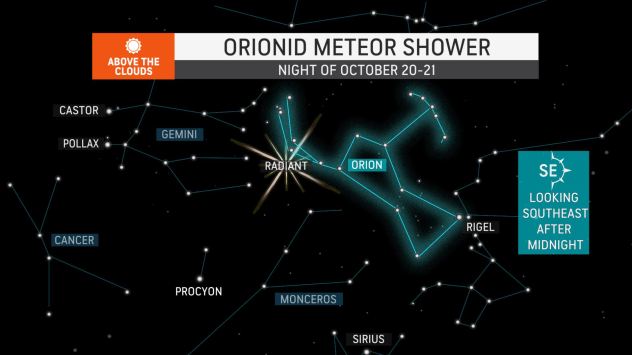 The Orionids feature around 20 meteors per hour during most years, but onlookers should curb expectations this year as the peak of the shower falls on the same night as the full Hunter’s Moon.

Light from the full moon will radiate in the sky all night long, making it more difficult to spot some of the dimmer shooting stars. Hourly rates could be cut in half with only around 5 to 10 meters per hour.

Despite the light of the full moon, it will still be possible to spot some shooting stars streaking throughout the sky on Wednesday night.

For the best chance to see some meteors, astronomers recommend focusing on darker areas of the sky and avoid looking at sources of light such as the moon or a cell phone. However, folks will still want to look at their phones or computers before heading outside to check the latest cloud forecast, which is a concern for some areas of North America.

Many areas from the Gulf Coast to the Great Lakes will have partly to mostly cloudy conditions for the peak of the Orionids, but a pocket around the mid-Atlantic could be fortunate enough for a break in the clouds on Wednesday night.

Favorable weather conditions are also in the offing for the southern Plains.

Farther west, a widespread storm will spread disruptive clouds, as well as rain and mountain snow, across most of the West Coast and Rocky Mountains. The exception to this will be across the Desert Southwest and part of the Great Basin, where there will be some breaks in the clouds throughout the night. 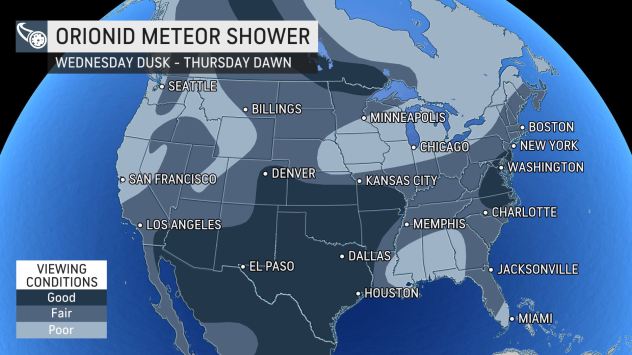 In the wake of the Orionids, skywatchers have three more minor meteor showers to look forward to in November.

The Southern Taurids meteor shower will reach its climax during the first week of November, followed by the Northern Taurids during the second week of the month. Both of these events only offer around five meteors per hour but are known for producing incredibly bright fireballs.

The Leonids will be the third shower of the month to peak and will be the best of the bunch, offering around 10 to 15 meteors per hour. Ice fishing is back: here’s how you can safely enjoy the winter pastim...