The red planet won’t appear this bright again until 2025, so experts say the coming days will be the best time to step outside after nightfall and look to the cosmos to witness the upcoming Mars opposition.

The night of Dec. 8 offers the best time to view Mars as the Red Planet reached opposition. The planet will appear its brightest since 2020 and will not be this bright again until 2025.

Mars has captivated scientists for decades as robots have explored the planet's rocky surface, leaving researchers to wonder what the planet was like millions of years ago and if it once was teeming with life. In the coming nights, the red planet will captivate stargazers as it appears brighter than it has in more than two years.

Mars will reach opposition on Dec. 8, making Thursday night one of the best nights of 2022 to see the planet glow in the sky.

Opposition is when Mars is on the opposite side of the Earth than the sun. After the sun shines all day, Mars will be visible all night, rising in the eastern sky shortly after sunset and setting in the western sky just before sunrise. Mars reaches opposition once every 26 months, with the most recent opposition occurring on Oct. 13, 2020. After this month, it won't happen again until 2025. 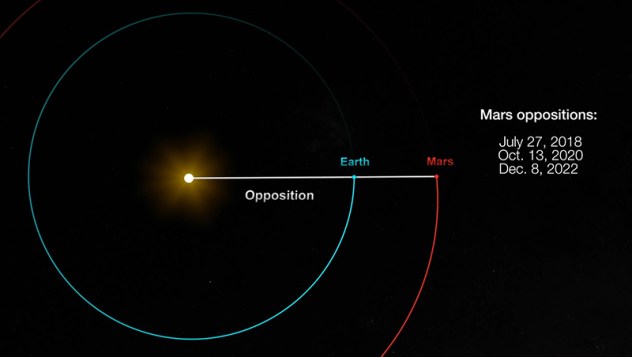 A diagram that shows the positions of the sun, Earth and Mars during a Mars opposition. Image not to scale. (NASA)

This is also around the same time that Mars will be closest to the Earth, making the planet appear brighter than any other point in its orbit.

Although opposition takes place Thursday, any cloud-free night throughout December will be a good opportunity to view the planet since it will remain a bright and prominent feature in the night sky into the start of 2023.

The best weather for viewing Mars Thursday night is predicted to be over the Gulf Coast, the central Plains, the interior Southwest and northern New England.

When compared to most stars and planets that appear white, onlookers will be able to see for themselves why Mars has the nickname of the red planet as it will glow red or orange.

No telescope is needed to see Mars since it easily outshines many of the stars in the sky, but it will be a good target for folks who get a new telescope for the holidays and are looking for an easy object to locate. 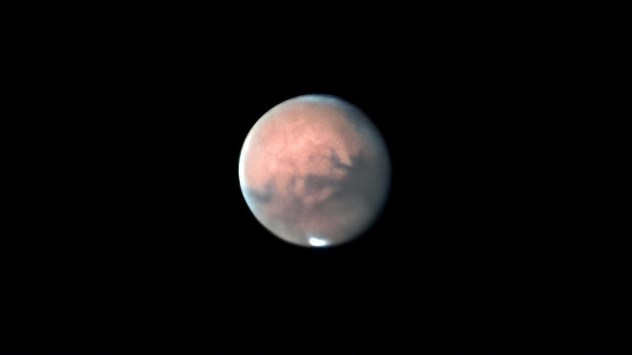 Mars photographed with a telescope less than a month before reaching opposition in 2020. (Photo/Brucewaters)

Not only is the Mars opposition a great time for stargazers to see the planet, but it is a unique time for planetary exploration as well. 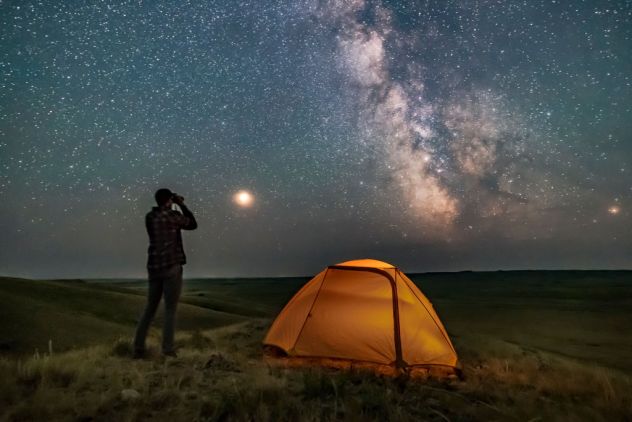 A Park interpreter poses for a scene in Grasslands National Park, Saskatchewan, under the Milky Way with Mars bright and to the left of the galactic center. (Alan Dyer/VW Pics/UIG via Getty Images)

The months leading up to opposition are also the best opportunities to launch spacecraft to the red planet. "It takes less power to travel to Mars at this time, compared to other times when Earth and Mars are in different positions in their orbits," NASA said.

When NASA launched the Perseverance Rover in 2020, it took about seven months for the rover to make the journey to Mars, even while the spacecraft was traveling through space at 24,600 mph. The time it takes to travel from Earth to Mars is one of the many reasons why a crewed mission to send humans to the planet is such a daunting task and is just one of many obstacles that must be addressed before astronauts can journey to the planet.