Tornado activity began to slow down during a month that is typically the most active of the year. Not only are numbers lower than in 2021, another trend that has developed over recent decades has been observed this year.

The 2022 tornado season has been slightly below average through July, but the timing of tornadoes has been far from average.

Tornado activity in the United States has fallen below average despite a strong start to the spring severe weather season. Even in the traditional twister hotspot of Tornado Alley in the central U.S., tornadoes have been less frequent.

"Through the end of July, we have seen around 1,000 tornado reports, which actually is just below average going into this time of the year," said AccuWeather Meteorologist and storm chaser Tony Laubach. "March and April were well above average, nearly double the numbers we typically see in those two months. And March alone accounted for nearly 300 tornado reports, nearly four times the number we would see that month." 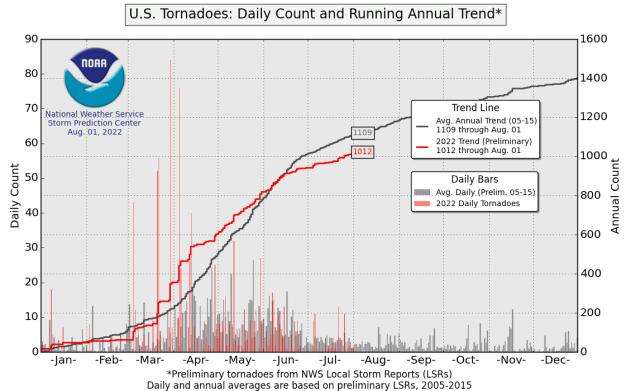 Tornado season in 2022 started off strong with much higher-than-average reports during early spring, but around the May mark, they started to drop off. (NOAA)

Laubach said May usually accounts for the highest numbers of tornadoes in a given year, but that's when this year's trend started to slow down. While steady, reports were below average in the month of May, and both June and July continued that trend.

At the same time, the location of tornado reports continues to shift. What most people think of as “Tornado Alley” is a stretch of land from north-central Texas up through South Dakota, but that part of the country has only seen a small number of this year’s tornadoes -- a trend that’s developed over the past couple of decades.

“What was once considered Tornado Alley in the central Plains has seen record low numbers of tornadoes over the last several years,” Laubach said. At the same time, twisters have been touching down more frequently in places such as the Southeast and Midwest.

However, tornadoes did not skip Tornado Alley altogether so far in 2022. A massive tornado cut a path of major damage in Andover, located near Wichita, Kansas, in late April. Storm chasers captured footage of the twister, which was rated EF3 with winds of 155 mph by the National Weather Service, tearing through the populated area, razing buildings and tossing debris into the air. The tornado injured three people, but it did not turn deadly as it remained on the ground for nearly 13 miles.

Elsewhere, the strongest tornado to strike Michigan in 10 years occurred when an EF3 tornado touched down in Gaylord, Michigan, killing two, injuring dozens and destroying at least 12 homes in late May. That was the first time an EF3 tornado hit the state since March 2012.

Tornado counts have also been climbing earlier in the season in recent years when compared to the past. That trend is likely due to when ingredients come together for volatile severe weather to ignite near the Gulf Coast. Warm and sultry air arrive sooner in this zone, adding necessary fuel for thunderstorms capable of spawning tornadoes. 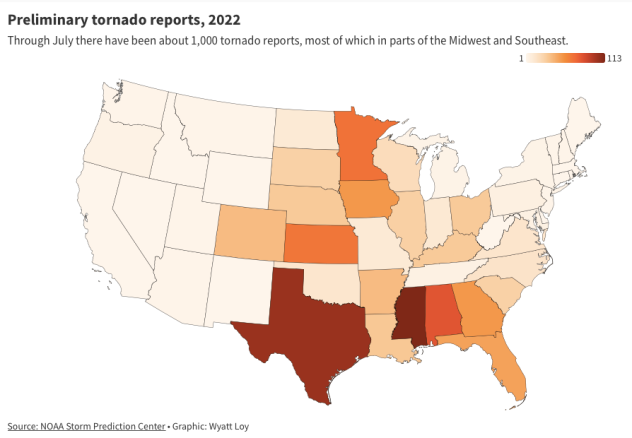 From 2000-2019, the Southern states of Mississippi, Alabama and Kentucky experienced as many as 300 more tornadoes than the period of 1980-1999. South Dakota, Nebraska and Texas -- all Tornado Alley states -- actually recorded a decrease in tornadoes in that same period. But, what's causing this shift?

"You're going to see higher pressure aloft over the Southwest, and that will bring drier air into the Plains and force the storm track and the worst of the tornadoes to develop farther east into the Mississippi and Tennessee Valley," said Paul Pastelok, AccuWeather Lead Long-Range Forecaster. "You're going to need to break that drought to get more consistent action going on in Tornado Alley."

Along with the decreased moisture across the Plains states from an ongoing megadrought, the warmer water in the Gulf of Mexico has increased the moisture in the atmosphere in the Mississippi and Tennessee river valleys.

As for the low tornado count in 2022, specifically, that has been influenced by a few different factors.

"The overall pattern was very amplified during the early part of the spring season, and as we rolled into tornado season, things changed in the northern Pacific, which made it less amplified across the Rockies and also the central Plains states," Pastelok said. "So the storms didn't have the significant upper-level support to produce more tornadic activity."