An explosive volcanic eruption occurred near the Kingdom of Tonga, a nation of 170 islands in the southwestern Pacific Ocean, causing tsunami waves to impact the region and ash to fill the sky.

A tsunami warning was hoisted for the entire west coast of the United States, Hawaii and eastern coasts of Japan on Saturday morning after an earthquake struck near Tonga in the South Pacific. The earthquake occurred as a violent volcanic eruption forced islanders to flee and created dramatic scenes of darkened skies — and satellite images captured the geologic event in stunning detail.

More than 210,00 people have been ordered to evacuate from portions of eastern Japan including Shiogama, Miyagi, and Aomori, Japan due to the impending tsunami.

In the early hours of Friday morning, local time, a national tsunami marine warning was issued for Tonga, warning residents to avoid coastal areas. Around 7:20 a.m., Tonga Geological Services forecast an imminent eruption for the underwater Hunga-Tonga-Hunga-Ha'apai Volcano after capturing satellite images that detected volcanic ash, steam and gas. The volcano is located about 30 kilometers (19 miles) southeast of Fonuafo'ou Island, Tonga. Then, a second eruption occurred on Saturday at around 5:30 p.m.

Residents reported hearing the volcanic eruption, saying it sounded "violent" on Saturday, and large waves were crashing onshore by 6 p.m. as residents reported it was raining ash and tiny pebbles as complete darkness covered the sky, despite sunset not arriving until around 7:30 p.m. Some residents described the sound as closely related to bombs exploding or loud thunder crackling. There were even reports of those in New Zealand hearing loud booms from the eruption.

Taaniela Kula, head of Tonga Geological Services, said the eruption had a radius of 260 km (162 miles) and that residents are advised to stay indoors as much as possible. 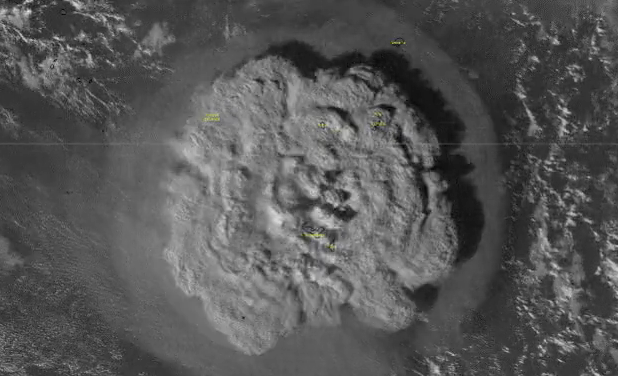 This Himawari visible satellite image shows the eruption of the Hunga volcano as seen from outer space.

Even those across the globe began to take notice of this phenomenon as viewers were astonished by satellite images of the explosive eruption and detection of an immense amount of lightning embedded in the smoke clouds. The Hunga volcano sent ash 20 kilometers (12 miles) into the air. The eruption was described as one of the most violent volcano eruptions ever captured on satellite.

A tsunami wave was recorded on the Nuku'alofa tide gauge at 5:30 p.m. on Saturday, about 1.2 meters (4 feet) high, causing severe flooding in residential areas of Nuku'alofa. Water rushed through churches and homes as Tongans rushed to higher ground under the cover of darkness around 6 p.m.

Beyond the tsunami warning, Tonga's Meteorological Services issued heavy rain, flash flooding and strong winds advisories for both land and coastal waters, according to CNN.

An evacuation order was issued for part of Australia's east coast after the country's Bureau of Meteorology issued a tsunami warning. 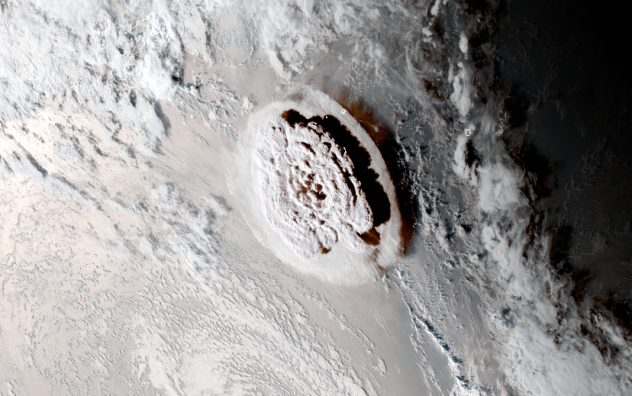 New Zealand's National Emergency Management Agency warned of strong and unusual currents, along with unpredictable surges at the north and east shores of the North Island. The Island of Fiji issued an advisory warning residents who live close to the coast to move to higher ground.

The Vanuatu Meteorology and Geo-Hazards Department issued a tsunami advisory for all regions of Vanuatu, reporting that at 3:00 p.m. local time, the volcanic eruption caused a magnitude 7.6 earthquake. The department warns residents to move away from the coastal areas to higher grounds as a possibly destructive tsunami could impact the region.

This is not the first time this volcano has erupted, as local news station RNZ reported it was erupting intermittently in late December, but had since been declared dormant. The last eruption was on Dec. 20, though Kula said Saturday's eruption was about seven times more powerful and continuing to grow.

Hundreds of tourists a day scale this volcano to witness an eruption in-person
Weather Explained: Volcanic eruptions and lightning facts
Lava flows from volcano in the Galapagos Islands