Humans have always been fascinated by volcanoes. One of the most stunning phenomena that occurs is volcanic lightning. Understand the science behind it!If you live in certain parts of the United States, then volcanic eruptions can be a real threat. Since the beginning of time, humans have been both terrified and fascinated by these mounts of molten lava. When volcanoes erupted and sent deadly lava flows over entire villages, early humans believed they were caused by divine wrath. To prevent future eruptions, some cultures sacrificed humans by throwing them into the center of the fire. The almost supernatural display of an erupting volcano’s lethal force still intrigues us today. One of the most stunning phenomena that occurs with these wonders is volcanic lightning. 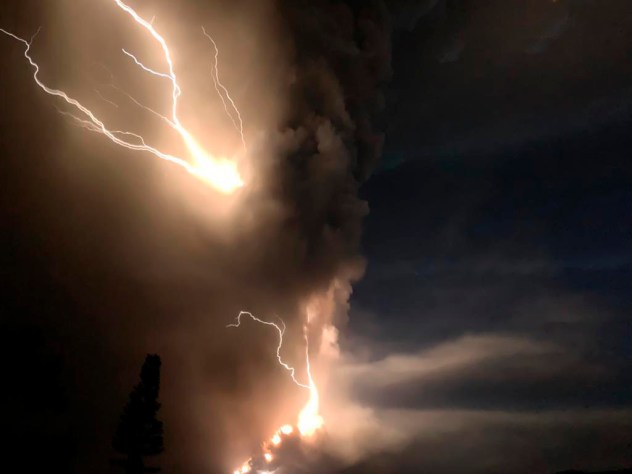 Most science classes teach about volcanic eruptions. Your teachers explained how intense heat and pressure inside the earth often explode through weak spots in its crust. Over time, the molten lava hardens into hills and mountains we call volcanoes. You know about the seismic action, lava, mounds of ash, and miles-high pillars of smoke associated with eruptions—but did you know that they also produce volcanic lightning?

Typically, lightning is produced along with a thunderstorm. Competing waves of warm and cold air produce an electric charge that is released as a flash of light. During a volcanic eruption, billions of tiny particles from smoke and ash create friction. The friction causes an explosion from the center of the volcano’s angry crater. This friction changes atmospheric electrons into static electricity, which results in massive lightning bolts. As with lightning produced during thunderstorms, volcanic lightning may strike tall structures, trees, or split the ground in a violent burst of electrical force. Although electricity from volcanic eruptions is dangerous, it still gives a captivating display of nature’s power that we don’t completely understand. 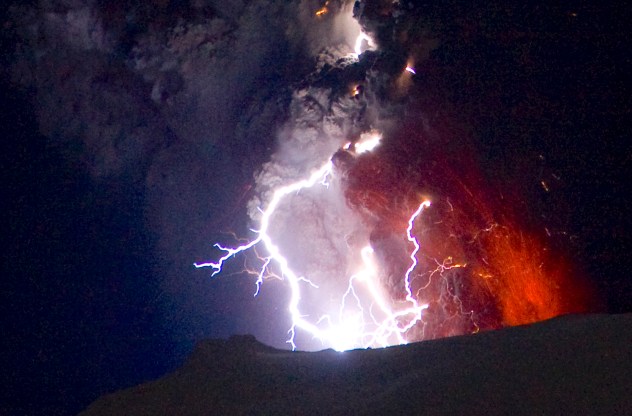 A volcano can erupt without any warning. The seemingly never-ending uncertainty of a volcanic eruption makes living near an active volcano dangerous. During the recent volcanic eruption in the Philippine Islands, millions of people were evacuated as the Taal Volcano exploded its fiery fury across the land. Taal is one of ten active volcanoes on  the small island chain. Volcanic specialists, meteorologists, and residents snapped thousands of pictures and videos of the brilliant forks of lightning slashing through the rising mushroom clouds. Scientists were able to observe a little more about this atmospheric phenomenon.

The first recorded instance of volcanic lightning was more than 2,000 years ago on Mount Vesuvius. Today, volcanologists strive to discover more about these powerful electrical bursts. Because of the obvious hazards of being too close to an erupting volcano, the cloud of ash and smoke make volcanic lightning challenging to observe. It is often so hidden in smoky lava sprays that it is seen as brief flashes within. Experts say that lightning often precludes the most intense stage of a volcanic eruption. As the dust particles are supercharged with heat and static electricity, the lightning bolts may serve as a warning for the deadly lava waves ahead. They reach within the gray cloud in blazing arcs in all directions. At estimated temperatures of 30,000 degrees F, volcanic lightning bolts are as lethal as they are beautiful.

Volcanic activity in the United States

There are 160 active volcanoes in America, and volcanologists maintain intense observations of these dangerous wonders. Like the Philippines and most Polynesian islands, our Hawaiian Islands were formed from volcanic action. Of the several Hawaiian volcanoes, Mt. Kilauea is considered one of the most active volcanoes in the world. For nearly 40 years, this stewing giant has been belching smoke and flames into the atmosphere during various stages of eruption. America’s active top ten volcanoes are scattered throughout the west coast, from upper Alaska down through Washington State and California. These have experienced lightning displays in the past, but it’s hard to predict and study such a phenomenon.

The eruption of Mount St. Helen

In 1980, Mount St. Helen in Washington State erupted, causing a devastating disaster. It went down in history as one of the largest volcano disasters ever recorded. In the past 100 years, minor volcanic eruptions and smoke were recorded from time to time from this sleeping giant. In the early spring of 1980, a series of earthquakes shook in its vicinity, and the hibernating volcano awoke in a series of eruptions that lasted nearly two months. During that period, a volcanologist and other experts made some of the best observations of volcanic lightning to date. After its climactic eruption in May of that year, the aftermath of the volcano’s fury was evident. Tons of ash and soot fell and were blown as far west as the Great Plains. Whole forests and wildlife were destroyed by molten magma rivers pouring from the seething mountain.

In all, 57 people  died in America’s worst volcanic eruption ever. Although impressive lightning footage was recorded, it is unknown whether the lightning touched the ground and caused further damage. Mount St. Helen has been rumbling and in mild states of eruption as late as 2010, three decades after the disaster. At any time, it could erupt again. Those who live in and around that area live in constant fear of when such an occurrence might happen.

Thanks to modern technology and cutting-edge computer models, volcanologists are learning more about volcanoes and their capacity to destroy everything around them when they erupt. This technology gives them a better understanding of the signs of volcanic eruptions, and it helps to improve early warning systems. Since we have a general idea of what causes volcanic lightning, does it serve a purpose other than announcing impending eruptions? Scientists are still delving into the makeup and characteristics of these blasts of electric energy. In the future, we may discover how to harness this astronomical power to use for the good of the planet.

Volcanoes make lightning and send deadly sprays of lava from its fiery belly. If you live near an active volcano, it's imperative to know the status. Your local weather forecast, as well as news channels, will keep you up to date on current happenings. Always keep your eye to the sky, and your ear tuned in to the local news for essential updates on weather-related issues in your area.

Weather Explained: How and where do dust storms occur
What to do after an earthquake
What is the Waffle House Index?
What is the best way to melt ice?
How to prepare your home for a wildfire
7 simple steps to prevent wildfires
Report a Typo