Flights to and from Ninoy Aquino International Airport in Manila, Philippines, were delayed on Jan. 13, after the Taal Volcano erupted, sending a plume of smoke and ash racing into the sky.

A day after rumbling to life, the Taal Volcano in the central Philippines began to spew lava on Monday -- and officials warn that eruptions could last months or even years. The volcano is located in the Batangas province and is the country's second most active volcano.

A weak lava flow was emitted from the active volcano for an hour and a half early Monday morning, according to PHIVOLCS. The volcano was only spewing smoke and ash on Sunday. Officials said that this does not necessarily mean the volcano has entered the "hazardous explosive eruption" phase yet.

"We haven't seen yet the hazards of the 1965, 1911, and 1754 eruption manifested in Taal Volcano. [If it is a hazardous eruption], we will see flows of ashes, rocks, gas at speeds of more than 60 kph [37 mph] horizontally and that can move across the lake," PHIVOLCS Director Renato Solidum told CNN Philippines.

Taal Volcano rumbles to life in the Philippines

Metro Manila, located about 101 km (63 miles) north of the volcano, was among several communities where ash fell from the sky and blanketed the ground.

"Outside of isolated showers and thunderstorms, mainly dry conditions are expected across Luzon into midweek. A tropical disturbance to the east of the Philippines will be pulled north and east, away from the area," Kelly added.

"Fine ashfall can cause irritation and breathing problems especially among the elderly and children and it is particularly dangerous to our health," PHIVOLCS said. "Affected populations are advised to protect their mouths and noses using N95 grade facemasks or wet cloth or towel. Motorists are advised to drive with extreme caution as ash can cause poor visibility, and, when wet, can make roads slippery."

Officials say the active volcano could continue to erupt several times over the next few months or even years, prolonging concerns of negative health effects.

About 300,000 people in the Batangas province have been urged to move to safety over the next few days, according to The Associated Press. 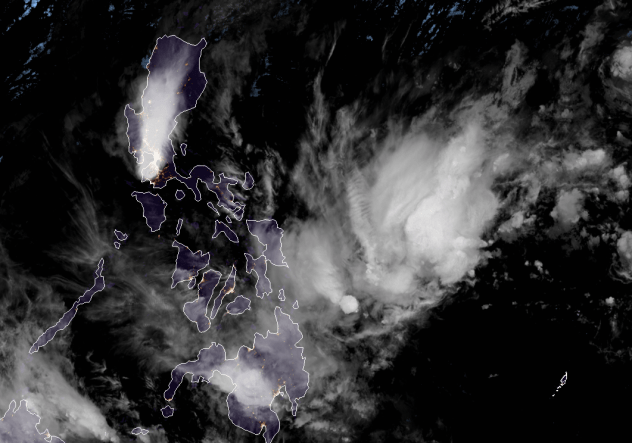 This satellite image shows the plume of volcanic ash spreading north across Luzon (top left) and a tropical disturbance to the east of the Philippines (right) on Sunday night, Jan. 12, 2020. (Photo/RAMMB)

Weather satellites caught the plume of ash and smoke as it was ejected up to 50,000 feet into the air. Lightning strikes were captured on camera in the towering plume.

Thousands of passengers were stranded at Manila's international airport after it was temporarily closed due to safety concerns. Partial operations resumed around midday Monday, but passengers are advised to check with their airlines to confirm flights before heading to the airport.

A flight carrying the country's president, Rodrigo Duterte, was the first to land at the airport on Monday after his Sunday flight from Davao City to Manila was canceled due to the eruption.

Road closures and power outages have also been reported as a result of the volcanic activity.

All classes within the provinces of Cavite, Batangas, Rizal and Laguna were canceled on Monday, Jan. 13. due to heavy ashfall. Manila City Mayor Isko Moreno has also ordered the suspension of classes in all levels of public and private schools on Monday. Some schools and businesses remained closed on Tuesday.

"The public is reminded that the main crater should be strictly off limits because sudden steam explosions can occur and high concentrations of lethal volcanic gases can be released," PHIVOLCS said. "In addition, communities around the Taal Lakeshore are advised to take precautionary measures and be vigilant of possible lake-water disturbances related to the ongoing unrest."

The eruption occurred during one couple's wedding, and the photographer was able to capture the moment.

Photographer Randolph Evan has been a professional photographer for almost 8 years now and has never experienced a moment like this one.

“While the bride was getting ready around 2 p.m., we already noticed white smoke coming out of the Taal volcano. Eventually, the smoke became darker as the day progressed. But miraculously we were able to finish everything from ceremony until the reception. The couple was even able to do their vows, first dance and speeches,” Evan said. 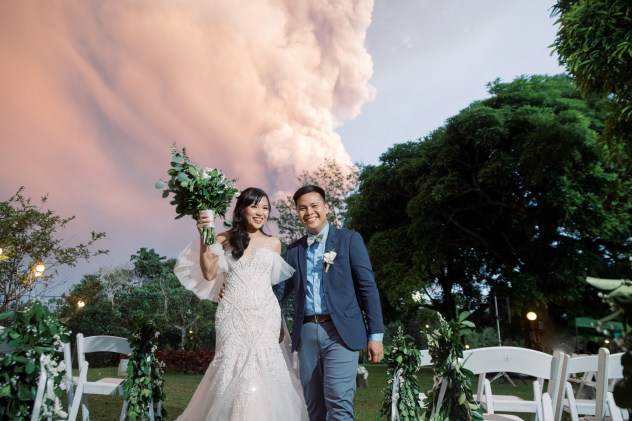 Chino and Kat Vaflor pose for wedding photos during the eruption. (Photo via Randolf Evan Photography)

Everyone was actually calm and just trying to get a feel of the couple if they would decide to evacuate or not.

“It was an intimate wedding so most of the guests there were their relatives and close friends. The mood was surprisingly relaxed. It was kind of funny because the volcano steam served like an entertaining backdrop for the guests that was just changing colors from white to yellow to pink then grey. As for the couple they seemed relaxed too and unbothered. They were still able to be in the moment for their wedding which was a relief,” Evan said. 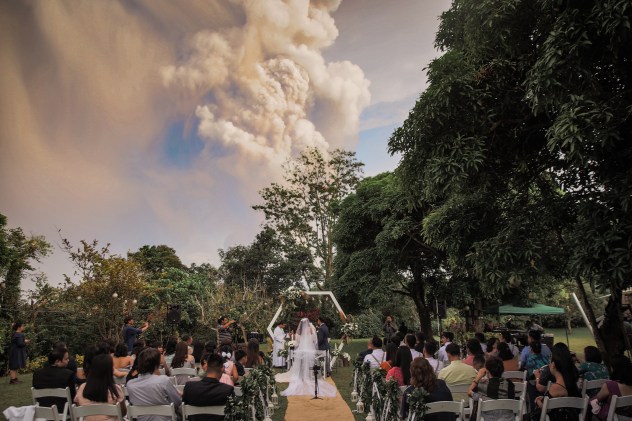 Chino and Kat Vaflor exchanging their vows during the eruption. (Photo via Randolf Evan Photography)

Everyone who attended heard occasional rumbles and thunder but Evan said he isn’t sure if it was directly related to the volcano’s activity.

“We were actually nervous because while working we kept on checking social media for updates on the volcanic eruption. So we were actually aware of the warnings and escalating levels that were being announced real-time. We also discussed discretely among ourselves what we should do when worst comes to worst,” Evan said. 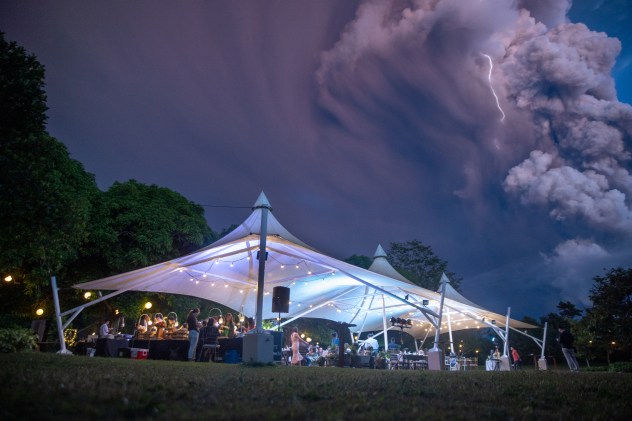 A wedding party continues during the volcano eruption. (Photo via Randolf Evan Photography)

“The couple genuinely didn’t want to cancel though, as we later found out it’s because they have been planning for this day for 8 years and after 2 kids already. So this day (of all days) was always going to be special no matter what,” Evan said.

Evan said everyone from the wedding is safe.

A moderate to high level of seismic activity has been observed in the vicinity since March 28, 2019, according to PHIVOLCS.

PHIVOLCS strongly reiterated the total evacuation of the island amid over 200 volcanic earthquakes in the Taal region since Sunday.

"Such intense seismic activity probably signifies continuous magma intrusions beneath the Taal edifice, which may lead to further eruptive activity," PHIVOLCS said in a statement.

The last major eruption of the Taal Volcano occurred in 1977.