Volcanic eruptions can influence climate and global temperature because of the gases and dust particles spewed into the atmosphere during the eruption.

Volcanic eruptions actually cool the planet because the particles ejected from volcanoes shade incoming solar radiation. The cooling effect can last for months to years depending on the scale of the eruption.

"Large volcanic eruption columns can inject ash particles and sulfur-rich gases into the troposphere and stratosphere and these clouds can circle the globe within weeks of the volcanic activity," said Dr. Howard Diamond, manager of the Climate Science Program at NOAA's Air Resources Laboratory.

The small ash and aerosol particles decrease the amount of sunlight reaching the surface of the Earth and lower average global temperatures. 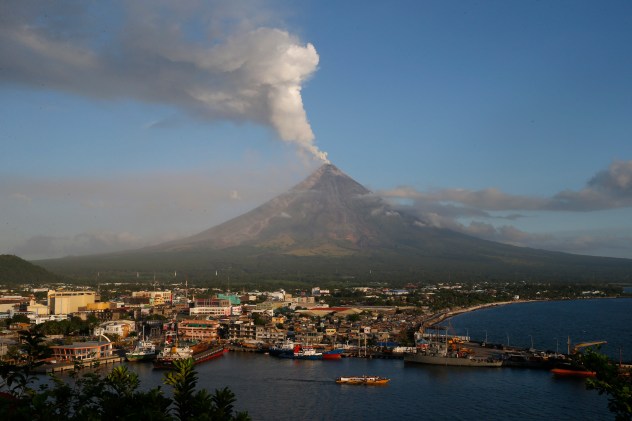 According to the Center for Science Education, volcanoes have also caused global warming over millions of years when extreme amounts of eruptions occurred, releasing greenhouse gases into the atmosphere.

"However, not every volcanic eruption results in a global impact. In order for a volcanic eruption to cause global effects, it really needs to be a very significant eruption which not only outputs a significant amount [of] material, but is also injected very high into the stratosphere," Diamond said.

Diamond said the last significant event of this kind was the eruption of Mount Pinatubo in the Philippines in 1991. 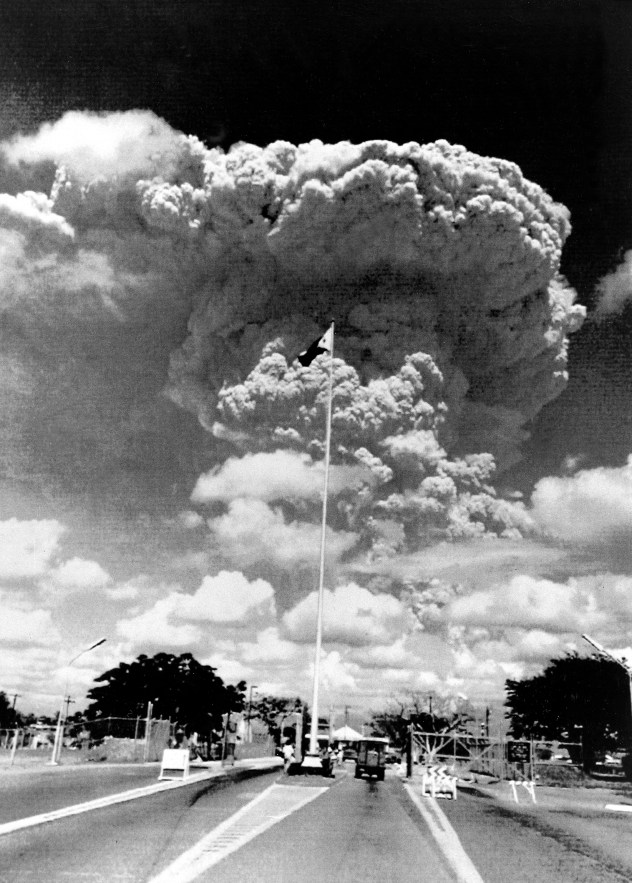 A Philippine flag flies over the gate to U.S.-run Clark Air Force Base in Angeles City, Philippines, Wednesday, June 12, 1991, as a cloud of volcanic ash from the erupting Mount Pinatubo looms in the distance. (AP Photo/Danny Perez)

"Eruption columns reached 40 kilometers in altitude and placed a giant umbrella cloud in the middle to lower stratosphere that injected about 17 megatons of sulfur dioxide (SO2), slightly more than twice the amount yielded by the 1982 eruption of El Chichón, Mexico. The SO2 formed sulfate aerosols that produced the largest perturbation to the stratospheric aerosol layer since the eruption of Krakatau [a volcanic island] in 1883," Diamond said.

Other more minor volcanic eruptions may have more localized and shorter-term effects but for truly global long-term impacts on temperature, the volcanic eruption has to be quite significant.

"The aerosol cloud spread rapidly around the Earth in about three weeks and attained global coverage by about one year after the eruption. The large aerosol cloud caused dramatic decreases in the amount of net radiation reaching the Earth's surface, producing a climate-forcing effect of cooling that was two times stronger than the aerosols of El Chichón," Diamond said.

Effects on climate were an observed surface cooling in the Northern Hemisphere of up to 0.5-0.6 degrees Celsius, and a cooling of perhaps as large as minus 0.4 degrees Celsius over large parts of the Earth from 1992 to 1993, Diamond said.

Global surface temperatures since 1940 compared to the 1981-2010 average (dotted line). Three tropical volcanoes had climate-cooling eruptions in the second half of the twentieth century: Indonesia's Mt. Agung in 1963, Mexico's El Chichón in 1982, and the Philippines' Mt. Pinatubo in 1991. NOAA Climate.gov graph, based on data from NCEI.

"Climate models appear to have predicted the cooling with a reasonable degree of accuracy," Diamond said.

As a result of the presence of the aerosol particles, the Southern Hemisphere "ozone hole" increased in 1992 to an unprecedented size, and ozone depletion rates were observed to be faster than ever before recorded. Diamond said the atmospheric impact of the Pinatubo eruption has been profound, and it has sparked a lively interest in the role that volcanic aerosols play in climate change.

"This event has shown that a powerful eruption providing a 15 to 20 megaton release of SO2 into the stratosphere can produce sufficient aerosols to offset the present global warming trends..." Diamond said.

According to Diamond, there is no real way to counter the effects of a volcanic eruption.

"The idea of what a volcano's possible effects on the climate and temperatures [are] has led to a fairly controversial area of study known as geoengineering, in which aerosols are injected into the atmosphere, similar to what a volcano does, to counter the effects of global warming caused by greenhouse gases like carbon dioxide and methane," Diamond said.

Large, violent eruptions may match the rate of human emissions while they last, but they are too rare to rival humanity’s annual emissions, according to NOAA. Human activities emit 60 or more times the amount of carbon dioxide released by volcanoes each year.