The powerful windstorm slammed northern France with winds equivalent to a Category 2 hurricane. In the United Kingdom, the Thames Barrier was closed for the 200th time to prevent serious flooding around the capital.

Storm Aurore caused major devastation to towns in northern France as it passed the area, leaving over 250,000 homes without power.

A powerful storm pummeled northwest Europe Wednesday into Thursday with hurricane-force wind gusts and heavy rain. The storm, named Aurore by Meteo France, swamped parts of the United Kingdom, forced the closure of the Thames Barrier in London and broke wind records across northern France.

France's Normandy Coast was one of the hardest-hit areas, as powerful wind gusts slammed the region. On Wednesday night, the community of Fécamp was rocked by a 109 mph (175 km/h) wind gust. Nearby, Le Havre reported a wind gust of 93 mph (150 km/h). This wind gust in Le Havre was the strongest ever recorded during the month of October in the city, according to Météo Express.

For comparison, a Category 2 hurricane in the Atlantic has maximum sustained winds ranging from 96-110 mph.

“As the storm started to move toward the English Channel on Wednesday, it began to rapidly strengthen,” said AccuWeather Meteorologist Tony Zartman. “The rapid strengthening is what unleashed the strong, damaging winds on the south side of the storm across northern France.” 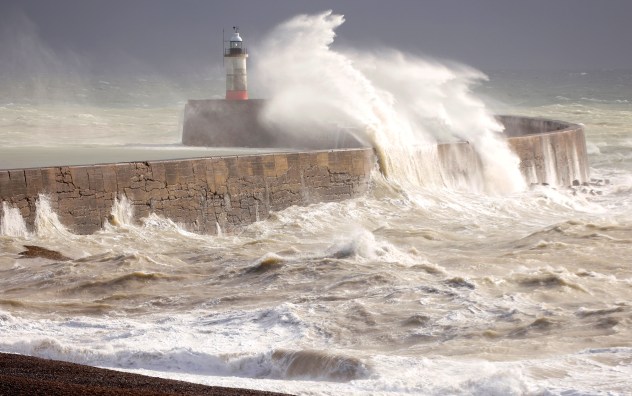 “The fast movement of the storm, combined with the winds produced by the storm itself, is what helped to amplify the effects of the winds,” explained Zartman.

These strong winds caused havoc across northern France and caused power outages to about 250,000 homes. As a result of the damage, train service was suspended on Thursday morning across Normandy and Champagne. Fallen trees also blocked many roads.

Winds were widespread enough to cause damage to buildings in Germany, Belgium and the Netherlands, according to The Associated Press. Several injuries were reported due to the damaging winds in the dutch town of Barendrecht, while a tornado was confirmed and blamed for damaging several homes in the German town of Schwentinental, located near the northern port city of Kiel. 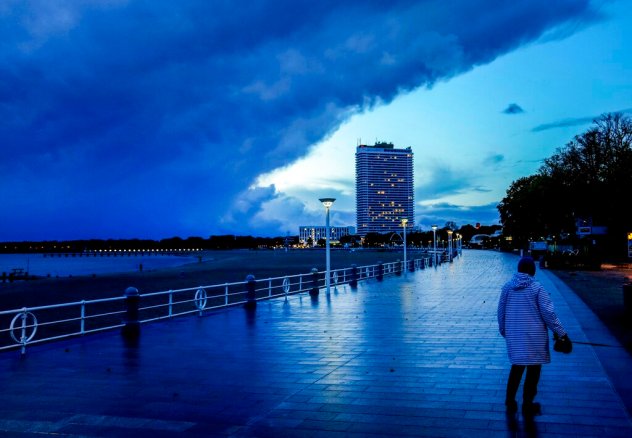 A woman walks on the promenade at the Baltic Sea in Travemuende, northern Germany, Thursday, Oct. 21, 2021. Northern Germany was hit by storm that unleashed heavy rain and fierce winds. (AP Photo/Michael Probst)

On the northern side of the English Channel, heavy rain and flooding were more of a concern in parts of the United Kingdom.

In Herstmoncuex, located near the southeast coast of England, 2 inches (50 mm) of rain was reported on Wednesday.

The heavy rain caused a mudslide to fall onto a portion of railroad track which led to disruptions in service.

West Sussex Fire and Rescue Service said it had received hundreds of calls on Wednesday night, including from people who needed to be rescued from their cars after driving into floodwater, according to the BBC.

Even after Storm Aurore pulled away from England on Thursday, flooding worries continued due to a strong northerly wind and astronomical high tides. This forced the closure of the Thames Barrier for the 200th time in its history. 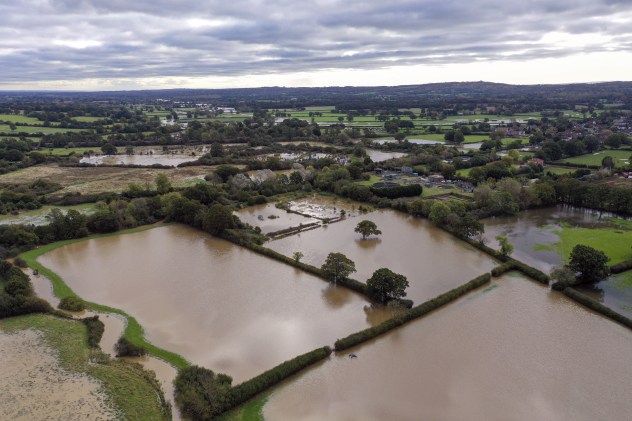 Flooded fields near Lingfield in Surrey, after southern England was hit overnight by heavy rain and strong winds from Storm Aurore moving in from France. Picture date: Thursday October 21, 2021. (PA via Reuters)

The Thames Barrier stretches across the Thames River just to the east of London. It was completed in 1982 to protect London from flooding on the Thames River during times of high tides. According to data from the U.K. government, the Thames Barrier is the second-largest moveable flood barrier in the world, protecting 125 square kilometers of central London, encompassing 1.4 million people, 400 schools, 16 hospitals and 86 train and tube stations.

"The Environment Agency is closing the barrier to protect London from a high tide as a result of low pressure and northerly winds coinciding with spring tides. Closure of the barrier will reduce the risk of flooding for up to 640,000 properties in London and along the Thames," the U.K. government said.

While windstorms are common across northwest Europe from the late fall into the spring, it is a bit early for a storm of this intensity, according to Zartman.