Trailers, motor vehicles and RV's were among the severely damaged after a tornado swept through Reeves County, Texas, on March 14. One injury was reported.

An uptick in stormy weather across the country will put the Plains to the Ohio Valley on alert for severe weather later this week.

An intense storm wrecked havoc earlier in the week, dumping feet of snow in the Sierra Nevada Mountains in the West and sweeping rain across the remainder of the Southwest into Wednesday.

Meanwhile, several rounds of wet weather will target the center of the country. Wet weather will spread from Texas and Oklahoma to the middle Mississippi River Valley Monday, and again Tuesday into Wednesday.

While there could be flash flooding with any of these rounds of rain and thunderstorms, any severe weather will remain isolated.

A pocket of severe thunderstorms is forecast to be centered on western Texas on Tuesday afternoon and evening. 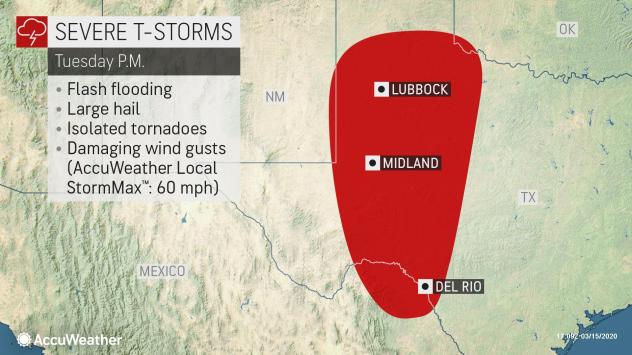 The full spectrum of severe weather can occur in the isolated storms from Del Rio to near Amarillo, Texas, later Tuesday.

However, once the more robust western storm system clears the Rockies on Wednesday night, the a more broad part of center of the country will need to be prepared for severe weather. 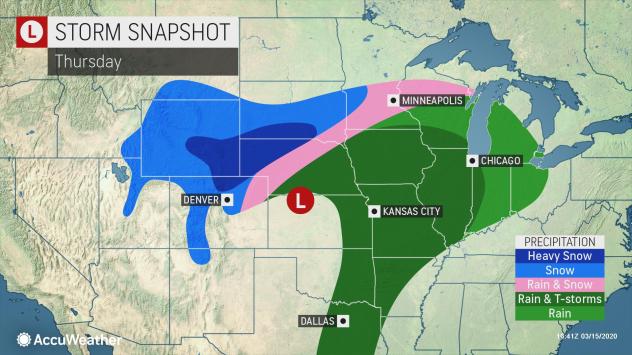 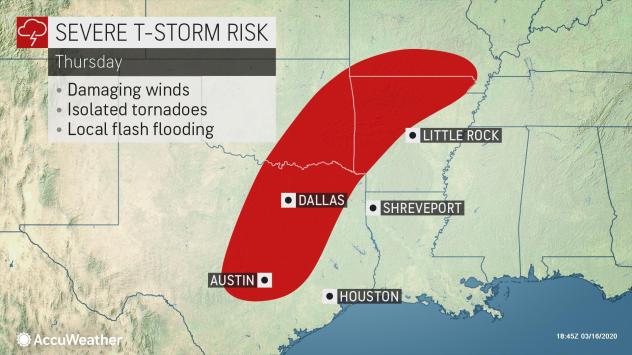 The risk of severe thunderstorms, including isolated tornadoes is forecast to extend from near Austin, Texas to close to Springfield, Missouri.

Cities like Dallas, Tulsa, Oklahoma, and Fort Smith, Arkansas, could all be in the line of fire through Thursday night. 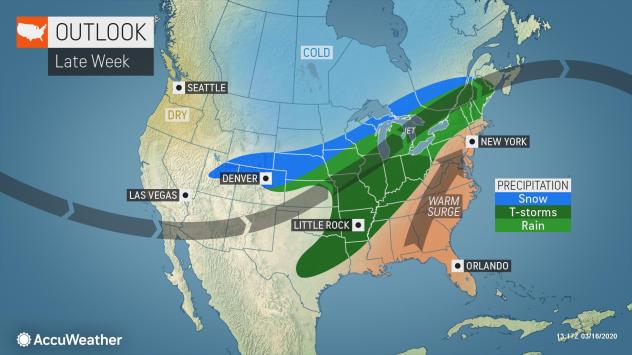 Farther north, different atmospheric dynamics will be in play, making for a slightly different severe theat.

The Midwest may have severe weather, including an isolated tornado, but the threat may be less widespread than that across the South.

In both locations, heavy downpours could cause flash flooding, and reduce visibility for motorists. Travelers along portions of many major interstates, including interstates 20, 30, 40, 55 and 70 may need to pay attention to the changing weather conditions into Thursday night.

'It felt like we were in a bad dream:' Tennessee man shares terrifying story of brush with Nashville tornado Late-week storm to bring threat for blizzard conditions across the Plains, Midwest The science behind severe thunderstorms and severe weather outbreaks Above-average February temperatures topple over 1,000 records in US alone

Most locations in the center of the country look to dry out by Friday, as high pressure moves cooler, drier air down from Canada. The one place where this may not be the case is across southern Texas.

"The same front that looks to produce the most robust severe weather of the week on Thursday may linger in the southern half of Texas on Friday," said Edwards.

Texas cities like Houston, San Antonio and Brownsville may get a couple chances throughout the day at some rain and thunderstorms, which much of the region could use.

According to the U.S. Drought Monitor's latest update on March 10, much of southern Texas is in a drought, with some locations in a severe or extreme drought. 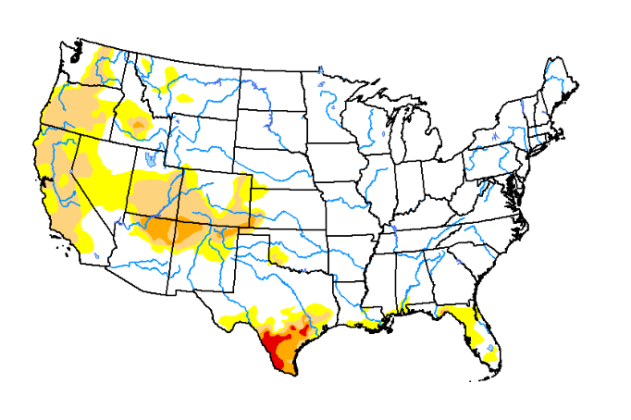 The above map shows the U.S. Drought Monitor's drought data across the country as of March 10. The darkest orange and red on the map indicates severe drought and extreme drought conditions, respectively.

Although winter is normally the driest time of year for the region, this past December through February was even drier than normal. Both Houston and San Antonio only recorded 63% of their normal rainfall, while McAllen only had 33%.

Locations right along the coast faired better during the winter with near-normal rainfall.

While the rain could help alleviate the dry conditions, a heavier downpour could also lead to flash flooding. Wet weather looks to linger in the southern half of Texas even into the weekend, even if the majority of the Plains looks to be rather quiet.