'It felt like we were in a bad dream:' Tennessee man shares terrifying story of brush with Nashville tornado

James Duncan, 27, had just eased into bed late on Monday night when a smartphone notification from AccuWeather alerted him and his girlfriend, Britni, of a life-threatening tornado that was fast approaching.

This vital information was the first warning that they received about the confirmed tornado that was tracking toward their location in Germantown, located just north of downtown Nashville, Tennessee.

A series of tornadoes ripped through Nashville and the surrounding area during the overnight and early-morning hours Monday into Tuesday. At least one of the tornadoes reached EF4 strength, the National Weather Service said, meaning wind speeds were at least 166 mph.

As daylight broke on Tuesday morning, first responders sifted through the widespread wreckage, seen in chilling drone video, and assessed the human toll. Officials said at least 24 throughout Tennessee had been killed by the outbreak of violent weather.

Duncan told AccuWeather he had never lived through a tornado before, and that the alert that he received from the AccuWeather app “literally saved our lives.”

A former lifeguard, Duncan said he and his colleagues swore by the AccuWeather app because it has "the most accurate weather radar."

The next minute went by in a flash as Duncan and his girlfriend rushed to safety while the twister tracked extremely close to their building.

The tornado “sirens outside began, then [about] 30 seconds later, the sirens cut off,” Duncan told AccuWeather. “It was dead silent for about 5 seconds, then the wind picked up. Within 10 seconds, it was howling.”

“I lifted the blinds, and saw a wall of black. Then things started hitting the window and my [girlfriend] and I shot out of bed and darted for the bathroom,” Duncan said. “We could hear objects slamming against the building … it was terrifying.”

This wind intensified as the tornado approached, growing louder and louder. “They say tornadoes sound like a train," Duncan told AccuWeather. "They were not lying.”

The tornado tracked so close as it tossed debris into air, that he could feel the change from inside the apartment building.

“I could literally feel the pressure drop. The feeling in my head from the pressure was insane,” Duncan told AccuWeather. “I’ve never felt anything like it. We were shaking.”

As quickly as it had arrived, the tornado had passed, leaving the two frightened and in the dark. A few moments later, they emerged from the safety of the interior bathroom to see the destruction left behind by the twister. 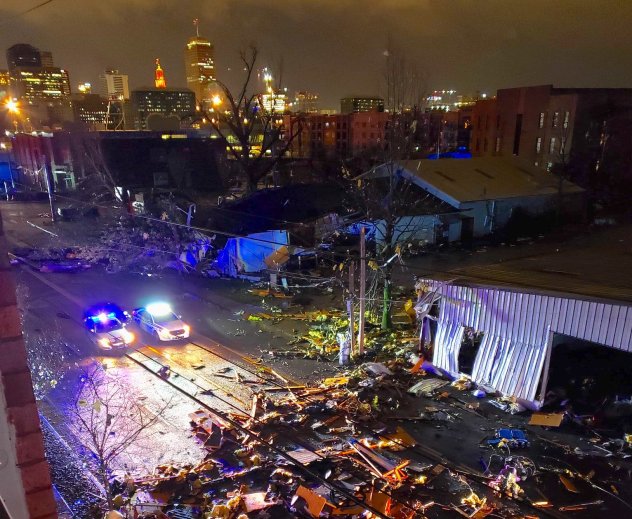 James Duncan's view of the tornado damage from Germantown in Nashville, Tennessee, on Monday night. (Twitter/@iamRVPTOR)

Duncan and Britni narrowly escaped disaster, but the danger had not come to an end once the tornado had passed.

“As we were surveying the damage from the fourth-floor balcony, the smell of gas seeped our nostrils,” Duncan said, adding that the tornado caused a gas leak. First responders arrived on the scene and came up to evacuate Duncan and his girlfriend.

“We grabbed what was necessary and bailed. Downed power lines were everywhere and first responders blocked off most of the streets. We had to walk roughly a mile through the debris and wreckage till we could get to a zone where a friend could pick us up to take us somewhere to stay.” 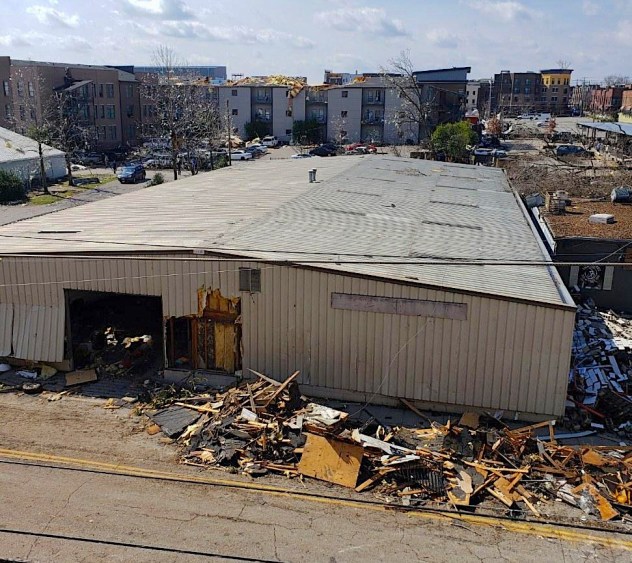 A view of the tornado damage in Germantown in Nashville, Tennessee, on Tuesday morning. (Twitter/@iamRVPTOR)

“There were buildings torn down … roofs missing … debris strewn across the road and hanging from what power lines that were still standing,” he added.

Others in the area were not as fortunate. At least 40 buildings were destroyed by the overnight tornadoes, and many were injured in addition to those who perished.

“We were the lucky ones," Duncan said. He added that the "Red Cross set up a frontward base at the Farmers Market in Germantown and are accepting any donations and volunteers to help. Please spread the word."

Death toll rises after ‘massive’ tornado tears through Nashville
One month stands out as a key indicator in AccuWeather’s 2020 tornado forecast
After tornadoes leave Tennessee in ruins, how can you help?

Originally from Florida, Duncan has lived through several hurricanes. Having lived in middle Tennessee for 18 years, he said Monday night’s tornado was like nothing he has experienced before.

“My phone was blowing up from people reaching out trying to figure out if we were OK. I was trying to reach out to friends in the area to see if they were OK," Duncan said.

"It was chaos. It felt like we were in a bad dream.”