As the streets of Charleston, South Carolina, flooded on April 23, a driver in this sports car took a risk and headed into floodwaters. It did not end well.

Following a brief reprieve from widespread severe weather in the United States, the threat for severe thunderstorms will ramp up again early this week.

Dry weather settled into the southern Plains for the start of the weekend, expanding into the Southeast on Sunday. High pressure settling over Georgia on Monday will also keep most of these areas dry into early week.

However, the break for most of the Southern states will be short-lived.

"A storm will shift into the Midwest early this week and will become a focal point for another round of severe weather on Tuesday," AccuWeather Meteorologist Brandon Buckingham said.

Although farther removed from the center of the storm, the cold front stretching down through the Mississippi River Valley is likely to be the severe weather producer. 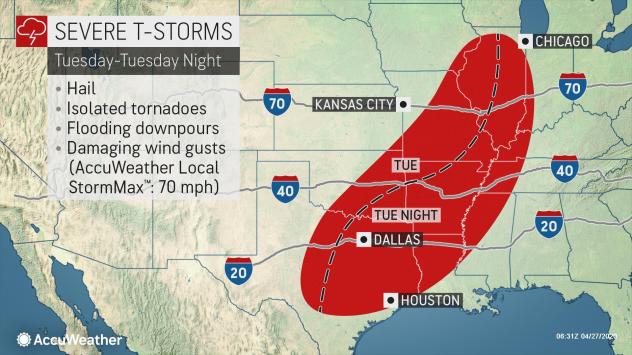 Wind flow shifting to a more southerly direction will pull warm, moist air from the Gulf of Mexico to help fuel the storms.

Gusty thunderstorms are expected to develop along this cold front as it advances eastward later on Tuesday. Damaging winds into Tuesday night of 50-60 mph are likely, with an AccuWeather Local StormMax™ of 70 mph.

Storms will also be capable of producing hail and flooding downpours. An isolated tornado or two is also not out of the question.

"While many storm systems have targeted the South with severe weather in recent weeks, the threat for feisty thunderstorm development may extend farther northward into the Midwest," Buckingham said.

Some heavy thunderstorms could also target parts of Illinois and Indiana on Tuesday.

The threat for severe weather is predicted to shift eastward on Wednesday as the storm pushes over the Great Lakes and a cold front digs through the Ohio and Tennessee valleys, and into the Southeast. 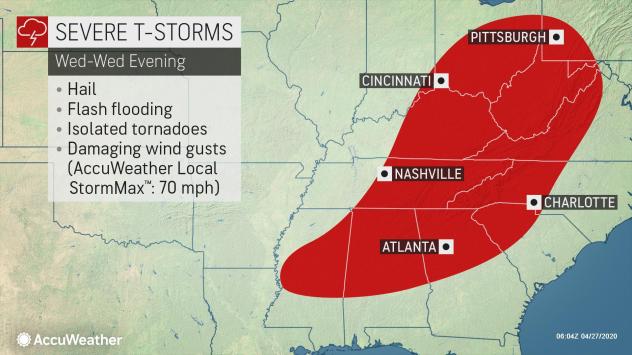 As the system pushes eastward, it may lose out on some of the Gulf moisture, causing it to weaken slightly. But, it may still be capable of producing damaging thunderstorms over already storm-weary areas.

Calif. residents urged to stay off beaches ahead of next week's summerlike heat in Southwest
Damaging tornadoes continue to devastate the southern US
Winter to strike back at northeastern US with another dose of snow
Daily coronavirus briefing: World leaders launch plan to hasten development of vaccine

The southern tier of the country has been hit hard by severe weather so far this spring.

Last Friday, severe thunderstorms tore through portions of the southern Plains and the lower Mississippi Valley, and damaging winds and hail hammered the regions into early Saturday morning.

In addition to a combined total of more than 120 damaging wind and hail reports, there were at least three preliminary tornado reports by the Storm Prediction Center on Friday evening. A tornado spun up in Bennington, Oklahoma, and in Ivanhoe, Texas. A "weak and brief" landspout was also spotted over an open field just east of Malta Bend, Missouri.

On Saturday evening, a tornado touched ground around Carthage and Gordonsville, Tennessee, according to the National Weather Service in Nashville. A tractor trailer on I-40 eastbound was overturned by the tornado passing through. Three injuries were reported with the incident, according to the Storm Prediction Center.