Rounds of severe weather to strike central US into the weekend

Disruptive weather will unfold during the holiday weekend from Texas to North Dakota.

NOTE: This story is no longer being updated. For the latest severe weather story, updates and coverage in the Plains this weekend, click here.

The central United States is getting active with severe weather once again, with rounds of thunderstorms anticipated into the Memorial Day holiday weekend.

The return of a more stormy pattern kicked off at midweek, with violent storms breaking out from eastern Montana to northern Colorado. A separate batch of severe weather fired up across West Texas late Wednesday.

On Thursday, the violent storms shifted slightly farther south and east, with over one dozen preliminary tornadoes reported in southeastern Colorado and southwestern Kansas. There were no reported injuries.

Hail up to 4 inches in diameter fell over San Angelo, Texas, just after 7:45 p.m. CDT Thursday, according to a report from the National Weather Service's Storm Prediction Center. Baseball-sized hail was also reported in Kendall, Kansas.

Into Friday evening, the area at risk will expand farther east to encompass portions of southeastern Kansas, southwestern Missouri, central and eastern Oklahoma, western Arkansas, and northern and central Texas, including Dallas.

Similar to prior days this week, all modes of severe weather will be possible. Two tornadoes were reported in Texas on Friday just before 7:30 p.m. CDT in Clay County, according to the National Weather Service. As of 9 p.m. CDT Friday, no injuries have been reported. 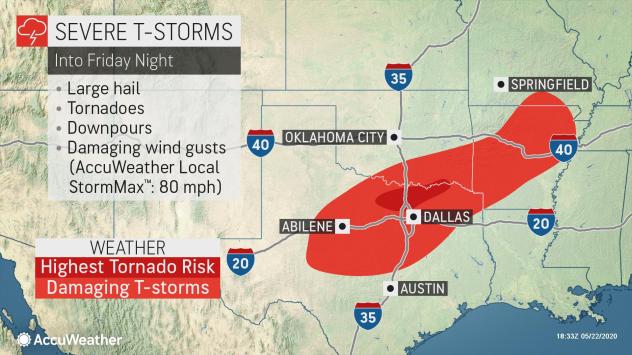 AccuWeather meteorologists anticipate another period of severe weather to ramp back up for the Memorial Day holiday weekend.

"As a piece of energy moves northeastward out of the Rockies and moisture moves northward on Saturday, severe weather will be possible," AccuWeather Meteorologist Ryan Adamson said. "Development of thunderstorms is most likely by the mid- to late-afternoon hours." 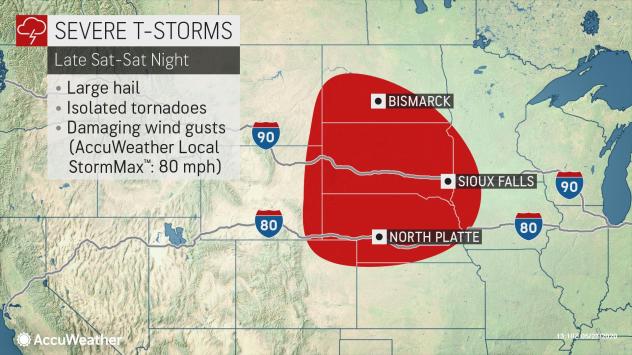 The greatest concentration of storms are forecast to erupt across western South Dakota and western Nebraska and then move east-northeastward.

On Friday evening, a tornado was reported in Nebraska by the NWS's Storm Prediction Center. The NWS reported a brief touchdown in Barneston in Gage County.

"The most likely threat will initially be large hail," Adamson said. "However, as the storms become more of a cluster, damaging winds will become more of a risk, with an AccuWeather Local StormMax™ of 70 mph."

Ideal weather conditions may have helped coronavirus thrive initially, study suggests
New research reveals the odds of life evolving on alien worlds
‘Dome of heat’ to threaten many record highs across western US next week

Farther south, from western Kansas to western Oklahoma and perhaps western Texas, along an advancing zone of dry air, thunderstorms will be more isolated in nature, but probably every bit as intense as the storms farther north. 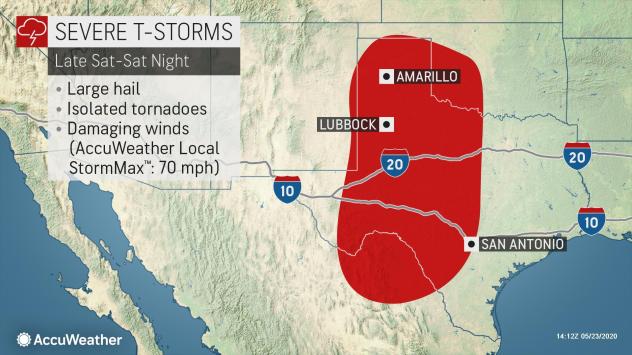 Since the day is likely to start out dry with sunshine across these areas, residents will need to make sure they stay aware of the weather throughout the day, especially if they are spending any time outdoors. As soon as you hear thunder, see lightning or spot tall, darkening clouds, head indoors and away from windows.

There could also be a third area of concern on Saturday, from eastern Iowa into northern Illinois and southern Wisconsin. "A disturbance will move along a warm front in the region during the afternoon, creating a narrow corridor where intense storms could fire up," said AccuWeather Meteorologist Jake Sojda. 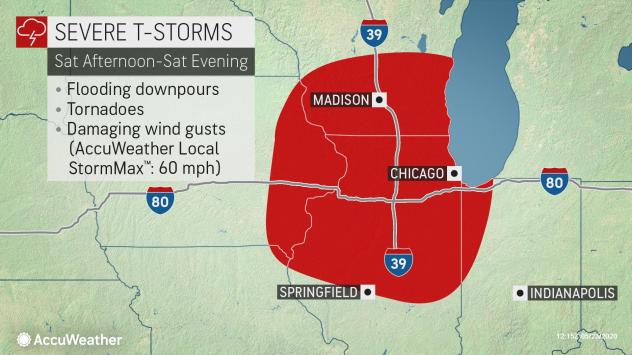 "In this type of set up, the area of concern can be relatively small, making it difficult to pin down, but within the small area, storms can be very intense, bringing all modes of severe weather."

"So far this year through May 19, there have been 640 preliminary reports of tornadoes. This is just below the average of 659 reports for the same date," Adamson said. 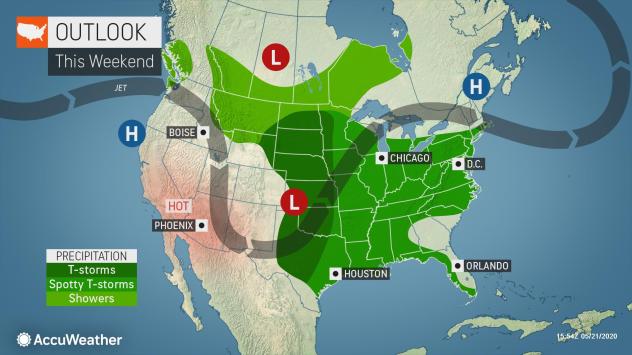 Torrential downpours are likely regardless of the severity of the storms, which could cause driving difficulties in the form of reduced visibility and a heightened risk of hydroplaning on stretches of interstates 29, 80 and 90.

Heading into Sunday and Memorial Day, the Central states are likely to remain the focal point of stormy weather, which is not good news for those with cookouts and other outdoor activities planned for the unofficial start to summer.