More than 90 people were killed as flash flooding swept through Belgium and Germany on July 15.

The death toll rose to over 100 across Germany and Belgium Friday, after days of heavy rainfall triggered catastrophic flooding across the countries, The Associated Press reported.

The rounds of heavy rainfall were the product of a slow-moving storm system that caused rivers to burst their banks, producing disastrous flooding that washed away houses and roadways. Many people are still reportedly missing as search and rescue efforts continue.

The North Rhine-Westphalia and Rhineland-Palatinate regions of Germany were among the areas hit hardest by the torrential rainfall.

"We have never seen such a catastrophe, it is truly devastating," Rhineland-Palatinate premier Malu Dreyer told state lawmakers, according to AFP.

In the village of Schuld, located to the southwest of Cologne, up to 70 people were reported missing after floodwaters caused houses to collapse Wednesday night, the AP reported.

The German army deployed around 200 soldiers to assist in rescue operations across western Germany. The military units used inflatable boats and helicopters to reach people stranded on roofs, but downed phone and internet connections hindered the rescues, according to the AP.

Tanks were also used to clear mud, trees and debris from roadways.

German Chancellor Angela Merkel stated she was distraught by the news and offered her sympathy to the families of those killed and missing due to the floods, the AP reported.

On Wednesday, firefighters in Hagen were called to rescue stranded motorists after streets were turned into rivers, the AP reported. Photos and videos on social media showed the torrents and water levels reaching to the hoods of cars.

Roadways were also flooded in Düsseldorf, including in the A44 tunnel that runs just south of the airport. The city reported 1.89 inches (48 mm) of rain in about 12 hours Tuesday night into Wednesday.

Flooding was not limited to western Germany this week with reports of flooding along eastern Germany's border with the Czech Republic.

One man went missing after being swept away in floodwaters trying to secure his property in Jöhstadt Tuesday night, and a disaster alert was declared in Hof County after torrential rains filled basements, uprooted trees and cut power to many in the region.

The severe flooding posed problems in neighboring countries as well.

According to Reuters, two men were killed by floodwaters and a 15-year-old girl was missing after disappearing near a flooded river in Belgium. There are unconfirmed reports that the death toll is higher.

The Vesdre River in Belgium burst its banks after rounds of heavy rain on Tuesday and Wednesday and sent raging rapids into the town of Pepinster, the AP stated. The force of the water caused several buildings to collapse, Mayor Philippe Godin said in a press briefing.

Major highways in Belgium were also submerged in floodwater and railway service was stopped. A train was derailed in the Belgian Ardennes after a portion of the track was washed away by floodwaters.

On Thursday, Christine Defraigne, the acting mayor of Liège, Belgium, urged residents living along the Meuse River to evacuate as the rising river threatened to pour over its banks, RTBF reported.

On Wednesday, Dutch media showed people being rescued from a historic mill in the Netherlands that was partially submerged in floodwaters estimated to be about 5 feet (1.5 m) deep, the AP reported.

On Thursday, evacuation orders were announced for the town of Echternach in Luxembourg. The Grand Ducal Fire and Rescue Corps, with the help of the police and the army, stated that they will be assisting residents.

To the southwest, police ordered cars parked near the Alzette River in Clausen, Luxembourg, to be moved after the rising river burst its banks early Thursday morning, local time.

AccuWeather Meteorologist Alyssa Smithmyer warned that many of these areas can receive more heavy rainfall into the second half of the week as a slow-moving storm system spins over western Europe.

"An enduring low pressure system has set up across northern Europe and is continuing to bring rounds of wet weather to regions across France, Belgium, Netherlands, Germany, Switzerland and Italy," she stated.

"This feature has been around since early week, wreaking havoc on locations such as London on Monday with slow-moving storms bringing the region’s single-day heaviest rainfall since 1983," Smithmyer said. Storms flooded streets and submerged cars around the city, she added. 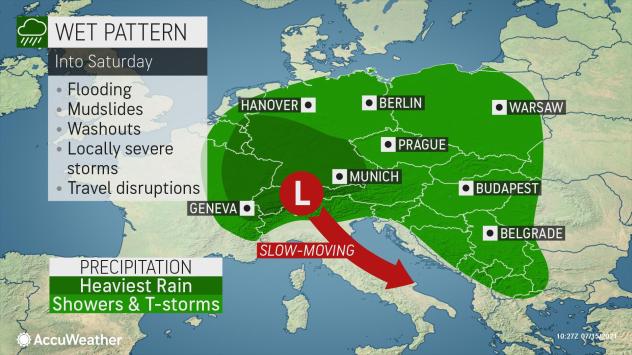 According to Smithmyer, the heaviest rainfall will begin to taper off across the hardest-hit areas of Germany, Belgium and Netherlands into Thursday evening. However, any additional periods of rain on Friday and Saturday can aggravate the ongoing flooding.

"Rivers and lakes across eastern France and western Germany are forecast to be at or nearing flood level by Friday, so residents are advised to be vigilant and weather-aware," warned Smithmyer.