Clash of air masses to trigger eruption of violent weather

Conditions that have been suppressing widespread severe weather outbreaks in the United States so far this month may soon be about to change, and forecasters warn that dangerous severe weather episodes may erupt.

2020 had a volatile start in terms of severe weather, including the volume of tornadoes spawned. The number of tornadoes through early March is above the 75th percentile at 139, according to data from the Storm Prediction Center (SPC). If this trend were to continue, a projected 1,884 tornadoes would affect the country this severe season. AccuWeather meteorologists cited unseasonably warm conditions as the culprit behind the well above-average tornado numbers. 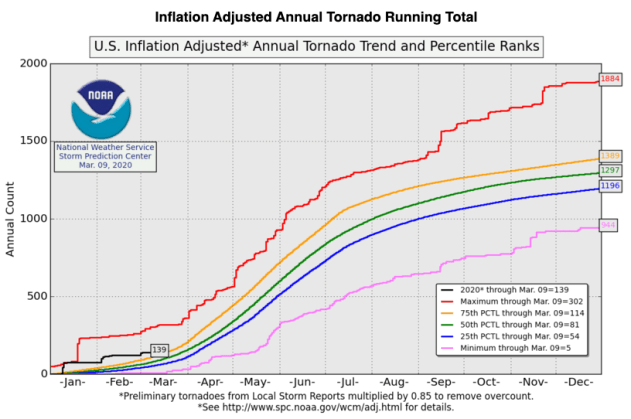 Besides the deadly tornadoes that ransacked Tennessee, with the most violent tornado in 11 years reported in the Nashville area, the number of severe storms has trended closer to average since the start of March.

"This is because the jet stream has been shifting around and weather systems have been moving along rather swiftly across the Lower 48 states this month," AccuWeather Lead Long-Range Meteorologist Paul Pastelok said.

Changes may be looming in the atmospheric pattern that can lead to another spike in tornadoes and severe weather in the coming days.

"We are concerned about a pattern that may develop next week, which favors severe weather and tornadoes over the central United States," Pastelok said. 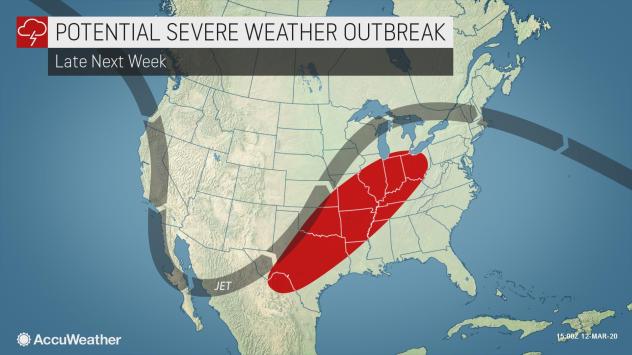 "One of the things we look for are large undulations in the jet stream, and it seems we are heading in that direction next week with a forecast big southward dip in the Western states and a northward bulge in the Eastern states," he explained.

A strong jet stream will be present next week with a significant northwest-to-southeast temperature contrast zone over the Plains. Any storm system, large or small, that moves through that zone can cause an eruption of thunderstorms and perhaps one or more severe weather outbreaks.

The difference between tornado watches and warnings How to stay safe when tornadoes strike at night 7 lightning safety tips if you’re caught outside during a thunderstorm March winds to roar across parts of Midwest, Northeast 'I just can't wrap my mind around it': Tennessee communities unite after 1st violent tornado in 11 years Why March's US tornado totals could increase significantly

The same setup may repeat itself around March 22 to 24, but perhaps centered more on the eastern third of the nation from the Tennessee and Ohio valleys to the central and southern Appalachians, as well as the mid-Atlantic and southern Atlantic coasts. 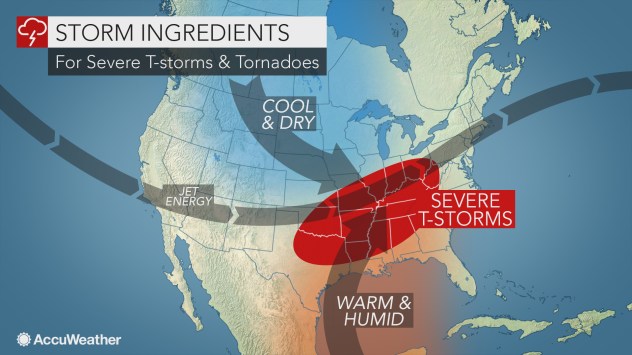 While forecasters say it is far too early to nail down exact details, timing and location of severe thunderstorms, patterns such as this often bring the full spectrum of severe weather ranging from damaging wind gusts and large hail to frequent lightning strikes, flash flooding and tornadoes.

AccuWeather will continue to provide updates on the potential for severe weather for the Central, Southern and Eastern states in the coming days.