Central US to face more severe storms, flooding this week

Fort Worth, Texas, Wichita, Kansas, and Oklahoma City are just a few of the cities at risk for powerful thunderstorms.

The danger of severe weather and flash flooding expanded across the nation's midsection on Wednesday, and risks will persist for the remainder of the week.

The week started with a few locally strong thunderstorms in parts of northern and western Texas on Monday. A storm system moving into the southern Plains sparked thunderstorms that produced heavy rain, gusty winds, hail and frequent lightning strikes into the overnight hours.

On Tuesday and Tuesday night, the threat of heavier thunderstorms and isolated severe weather shifted east with this system. Spotty thunderstorms developed from eastern New Mexico to central Texas and southern Oklahoma.

My favorite photo of lightning that I captured from one of those storms near El Campo and Ganado, TX (southwest of Houston) this evening before the deluge hit that area.#houwx #txwx pic.twitter.com/76kNi2O2Sn

Later Wednesday, a new round of severe weather will arrive in parts of Texas, but also Oklahoma and the central Plains.

"Another wave of energy will push out of the Rockies, bringing a dose of severe thunderstorms to some of the same locations that will be affected by thunderstorms earlier in the week," AccuWeather Meteorologist Courtney Spamer said. 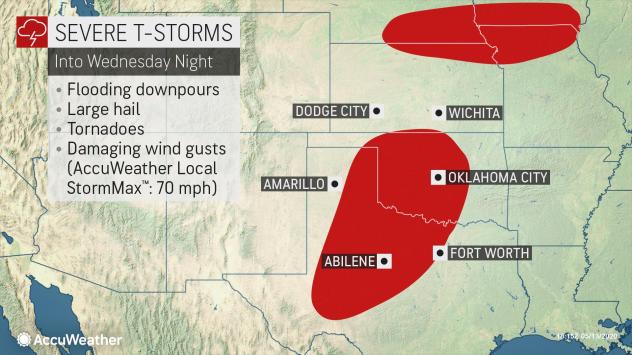 In the northern severe weather threat area, across Iowa and eastern Nebraska, the main threats will be from hail and heavy rainfall.

All modes of severe weather, including flash flooding, are expected across western and central parts of Texas and Oklahoma.

How to prepare for severe weather in the age of social distancing
Hurricane season may get early start near southeast US
AccuWeather School: It's May, how has summer started?

"The risks of tornadoes and large hail will be greatest when the violent thunderstorms first ignite later Wednesday," according to AccuWeather Senior Meteorologist Kristina Pydynowski.

The storms will tend to congeal into more of a squall line overnight Wednesday while pressing toward the lower Plains.

An AccuWeather Local StormMax™ wind gust of 70 mph is possible with the strongest storms, according to AccuWeather Meteorologist Max Gawryla.

Thursday will bring yet another day of violent weather to the nation's midsection as the storm responsible for the storminess runs into a large area of high pressure that will usher in warmer conditions across the eastern United States through the end of the week.

While a large zone of thunderstorms can erupt, AccuWeather meteorologists are most concerned for severe weather to ignite from eastern Oklahoma to northern Illinois – including parts of the Chicago area. 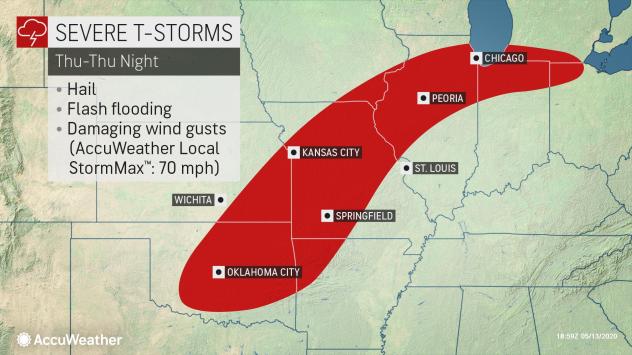 The strongest thunderstorms are capable of producing damaging winds, hail and isolated tornadoes.

Flash flooding is another concern and not just in the areas being threatened by the severe thunderstorms.

"Downpours can spread eastward across the lower Great Lakes on Thursday night," according to Pydynowski.

A more regional problem may develop related to heavy, repeating rainfall in the coming days, mainly in the South Central states.

"A slow-moving storm will cause drenching showers and thunderstorms to crawl across central and eastern Texas and neighboring areas this weekend and potentially into early next week," Pydynowski added. 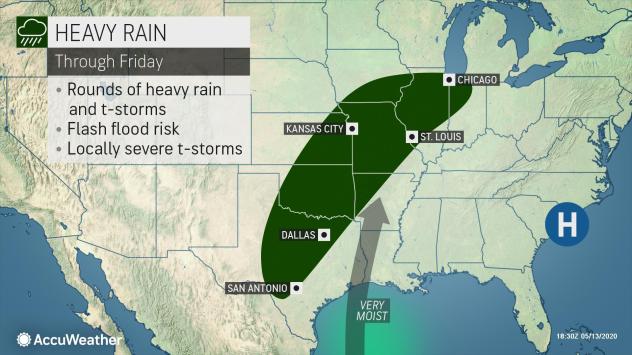 "Enough rain can fall, on the order of 3-6 inches with an AccuWeather Local StormMax™ of 8 inches, to lead to urban and small stream flooding, as well as rises on larger rivers," according to Pydynowski.

This weekend's non-tropical storm will soak Texas at the same time a separate storm offshore of the Southeast coast can kick off the Atlantic hurricane season early.