Arizona firefighters forced to handle multiple historic wildfires at once 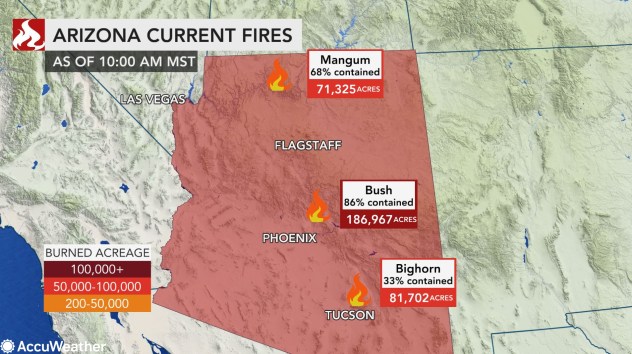 A dozen wildfires have torched over 400,000 burned acres in Arizona and have left parts of the state, particularly the southeastern portion, in ruins. Nearly half of that acreage has come from the Bush Fire blazing in the Tonto National Forest, just north of Phoenix.

As of Thursday morning, the still-young 2020 wildfire season has already burned more Arizona land than all but two years since 2002. Three current active wildfires in the state all rank in the top-10 for largest blazes in Arizona history, marking the first time since 2011 that multiple, historic-sized fires have blazed simultaneously. 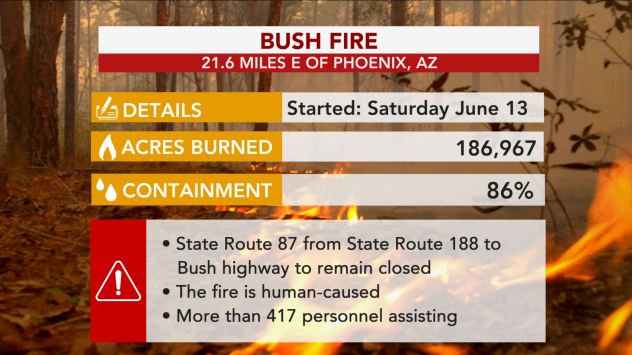 After igniting on June 13, the Bush Fire has grown rapidly in the past week, up to 190,000 acres as of Friday evening. The fire is now the fifth-largest in state history with 90% containment, according to Inciweb. It’s also the largest blaze currently burning in the United States.

Officials announced on Wednesday that areas of wildfire fuel within the perimeter continue to burn, creating columns of smoke. Suppression repair efforts have become a priority as containment has increased.

Gusty winds and dry conditions are forecast in the area through the weekend.

The inferno was ignited by a vehicle fire and led to evacuations in nearby areas such as Brownsville, Jake’s Corner, Slate Creek, Pioneer Pass and Punkin Center before evacuation orders were lifted on Sunday morning. As of Friday, there are no active evacuations.

“It has just been a monster of a season for us and extremely busy,” Dave Ramirez, South Zone Fire Management Officer, said according to AZCentral.com. “It’s been very busy for us, actually, in the past two years.”

Evacuations ordered due to the Bighorn Fire, burning near Tucson, Arizona, continued on June 22, as the fire grew to more than 58,000 acres. 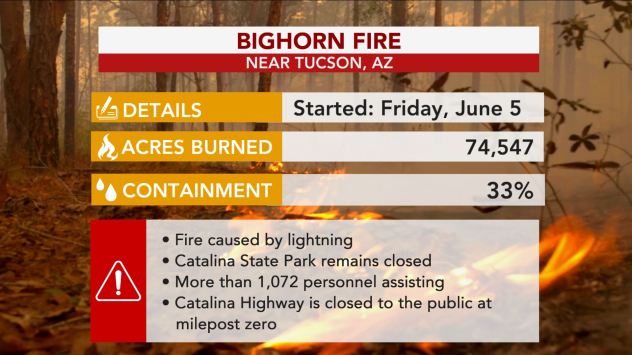 The state's second-fastest growing fire, the Bighorn Fire, increased to nearly 82,000 as of Friday evening, The fire has been the most destructive of any blaze in the state, causing $21.7 million of damage, according to the National Interagency Fire Center.

After reaching 40% containment on Friday, June 19, conditions worsened and the containment decreased to 16% by Monday, the least contained of any of the state's major current blazes. Firefighters worked to increase containment up to 33% on Thursday morning. It has required the attention of over 850 firefighting personnel, the most of any fire in the state. Burning in Coronado National Forest, the frightening spread of the blaze has escalated the classification from a type-3 to a type-1 fire.

The eastern slope of the Catalina Mountains, located south of the Pima County line and west of Redington, is in the "go" stage of being evacuated.

"With this type-1 team there is a lot of complexity, a lot of levels, a lot of layers but the communication is the most important part and it's been great, the level of communication on this team," said Adam Jarrold, Public Information Officer of the Bighorn Fire, according to KVOA.com.

A type-1 fire is the highest and most serious level of firefighting attention, as the classification means the risk level to structures and properties are at their peak. 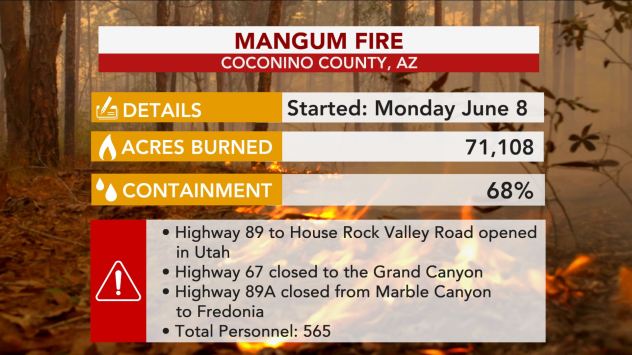 Charring at more than 100 square miles, the Mangum Fire is Arizona's second-largest fire. Since igniting on June 8, the wildfire has burned over 71,000 acres in the northern portion of Arizona in Coconino County and wreaked havoc for visitors trying to get to the northern rim of the Grand Canyon.

Firefighters have managed to make strong progress on the blaze this week, increasing containment from 33% to 68% over just a few days. As of Friday evening, the fire was 46% contained. Over 600 firefighting personnel, 33 engines and five helicopters have been used in the containment efforts.

The blaze, which is also the second-largest current fire in the U.S., has destroyed four structures and forced closures of popular roadways like Highway 89A and State Route 67 to Grand Canyon National Park, which takes visitors to the north rim of the Grand Canyon. 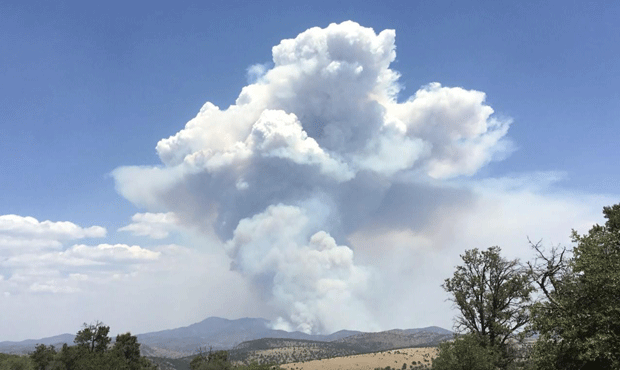 Smoke billows out of the Apache-Sitgreaves National Forest. (Photo via Inciweb)

The eastern-most wildfire in Arizona, the Bringham Fire has continued burning in the Apache-Sitgreaves National Forest north of Morenci since being ignited by lightning on June 6. It has scorched over 22,000 acres and is 37% contained as of Friday evening.

On Monday morning, Incident Commander Carl Schwope said the remote location of the fire has provided logistical challenges for firefighters, according to Inciweb. Despite being nearly nine times smaller than the Bush Fire, the Bringham Fire has caused nearly as much damage, according to the NIFC.

Heat and drought to stifle West through end of June
AccuWeather forecasters break down what to expect this summer across the US
Can scientists really make it rain?

Other blazes in the state

The Sawtooth Fire was previously burning in the Tonto National Forest, where it grew to 24,729 acres before firefighters reached 100% containment on June 7. The fire was burning in the scar of the Woodbury Fire, which was previously the fifth-largest fire in state history after burning 123,875 acres in 2019.

The Blue River Fire has burned 30,400 acres, but firefighters have managed to reach 85% containment of the blaze as of Thursday morning. According to the NIFC, despite being the state's fourth-largest fire, it has caused the least damage of any of the major blazes and is only requiring the attention of eight personnel.

The Good Fire, the Dry Lake Fire and the Tadpole Fire have burnt about a combined 25,000 acres between the three blazes, but they are largely corralled and estimated to reach 100% containment in the coming weeks.