A violent weekend of severe weather has left Jonesboro, Arkansas, in pieces after an EF3 tornado tore through the city on March 28.

A violent outburst of weather erupted across parts of the U.S. heartland over the weekend as two dozen tornadoes were reported across several states from Saturday into Sunday. Jonesboro, Arkansas, located in the northeastern corner of the state took the worst of it, suffering a direct hit from an EF3 tornado.

City officials and residents in Jonesboro were starting the recovery process after at least 22 injuries were caused by the twister. Officials said there were no fatalities caused by the storm.

Rounds of severe thunderstorms erupted from the southern Plains to the Ohio Valley Saturday, with the dangerous weather packing damaging winds, hail the size of softballs and destructive tornadoes like the one seen in Jonesboro.

An EF2 tornado hit Henderson County before 8 p.m. on Saturday night, the National Weather Service office in Paducah, Kentucky, confirmed. The tornado downed trees and electrical poles with wind peaks of around 115 mph and it stayed on the ground for 17. No injuries were reported from this tornado.

Final analysis by the National Service in Lincoln, Illinois showed an EF1 tornado was on the ground for a few minutes near Peoria, Illinois, at 9:00 p.m. on Saturday.

The National Weather Service (NWS) Memphis reported on Sunday afternoon that the tornado that hit Jonesboro had an EF3 rating on the Enhanced Fujita scale that measures wind damage caused by tornados. The EF3 rating means severe damage was caused. The NWS reported max winds of 140 mph. 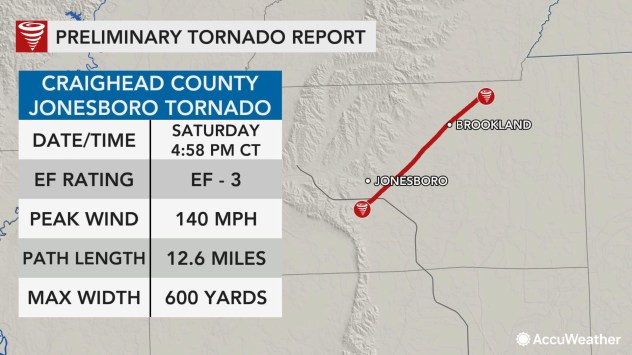 Tornado watches were in effect from Illinois to Mississippi, all of which lasted well into the overnight hours.

“The thunderstorm that spawned the devastating tornado in Jonesboro, Arkansas, was associated with a strong cold front that swept through the central U.S. on Saturday. Strong cold fronts are notorious for triggering severe weather, especially in the springtime when the air really starts to heat up,” AccuWeather Meteorologist Renee Duff said.

Severe weather across the central US sparks tornado in Jonesboro, Arkansas

The tornado ripped through Race and Caraway Streets, destroyed many homes and continued to Brookland, and the Arkansas/Missouri border after destroying the Mall at Turtle Creek.

“At 5 o’clock on a Saturday afternoon that place would’ve been packed, and at this point there was hardly anyone in there,” Jonesboro E-911 Director Jeff Presley said. 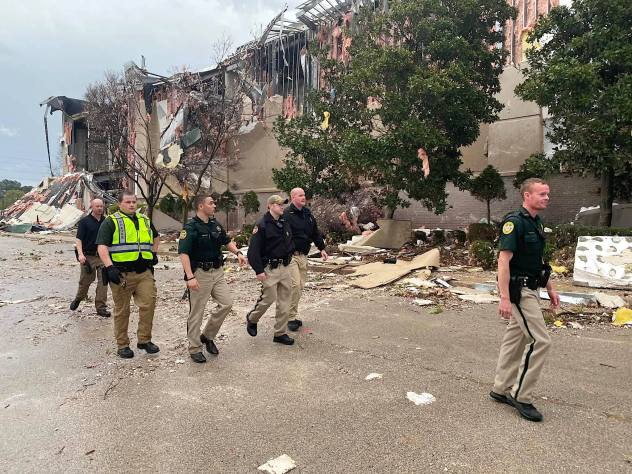 Police officers walking outside of the Mall at Turtle Creek following the destructive twister. Image via Jonesboro Police Department

Jonesboro Mayor Harold Perrin said things could’ve been worse if everything wasn’t closed due to the coronavirus, including the mall.

"I hate to say it, but with the coronavirus, I think there were not as many people here in the building as it could have been much worse," Perrin said.

Perrin explained that he was at home when the tornado struck the town, but he immediately went to the command center at the Mall at Turtle Creek to help, WITN reported.

“Jonesboro and people from all around northeast Arkansas really rallied fast to give us a hand, and it was inspiring,” Jonesboro Fire Chief Kevin Miller said.

Perrin said his office has received calls from area mayors, state agencies and other officials about helping the city of Jonesboro.

Arkansas Gov. Asa Hutchinson said he was paying "close attention" to the reports of tornado damage in Jonesboro. "Just praying all is safe," he said on Twitter.

Hutchinson declared Sunday a Special Day of Prayer in Arkansas.

"It is my hope that we can be unified in prayer thanking God for His love and mercy. We need His wisdom & guidance during this time of emergency," Hutchinson said in a Twitter post.

Jonesboro City Communications Director Bill and Perrin asked residents to stay home and not go outside or sightsee. The National Guard is responding to help secure the area, Campbell said.

Jonesboro Mayor Harold Perrin issued a citywide curfew for 7 p.m. -7 a.m., meaning no one is allowed to be on the roads or out of their homes. Officers are stationed all across town to enforce the curfew all night. However, the curfew does not affect those who have to go to work.

“People left without shelter in the wake of the tornado will face a round of soaking rain on Monday night. While no severe thunderstorms are forecast, the rain can be heavy enough to lead to localized flooding in the area,” Duff said.

There are four shelters open, including Journey Church on Hwy 49, University Heights Elementary, Fox Meadow Elementary, and Nettleton STEAM. Jonesboro JET busses are circling affected neighborhoods and taking people to shelters, while the veterinarian at Hilltop will take displaced pets.

Any construction company that wants to help, or any persons with chainsaws, are asked to get in contact with the Office of Emergency Management.

AccuWeather's free COVID-19 warning service extended to new states as severe weather looms
How to prepare for severe weather in the age of social distancing
ICYMI: Mississippi tornado prompts rare warning, a forecast for Atlantic hurricane season and why COVID-19 is similar to second-hand smoke

Below are AccuWeathers previous updates, alerts and storm reports during the storm on Saturday, March 28.

Severe thunderstorms capable of producing torrential downpours, frequent lightning and wind gusts up to 60 mph are tracking into the Nashville metro area currently. Seek shelter if you are in the path of these dangerous storms! 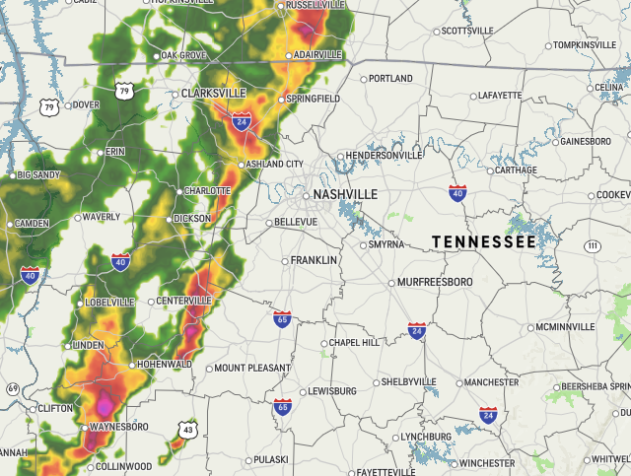 Multiple rounds of thunderstorms have brought strong wind gusts, hail and widespread reports of flash flooding around, and just south of the Pittsburgh area. Additional rounds of rain and thunderstorms are expected to continue overnight. 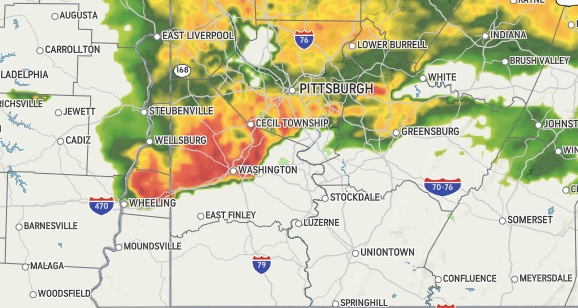 Numerous reports of power flashes in and around Peoria, Illinois, as a supercell likely produced a tornado as it tracked over the metro area. 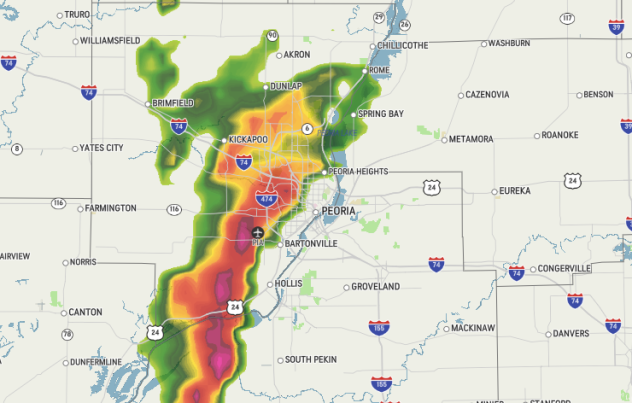 As Saturday winds down, here is a look at some of the strongest wind gusts reported across the Midwest throughout the day. 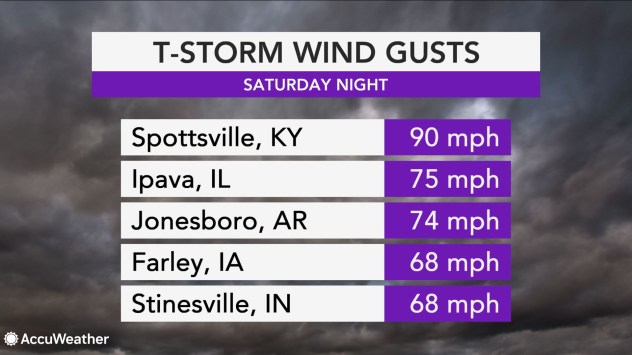 Parts of Evansville, Indiana, are underwater as severe thunderstorms drenched the region with flooding downpours. Some roads are impassable due to flash flooding. 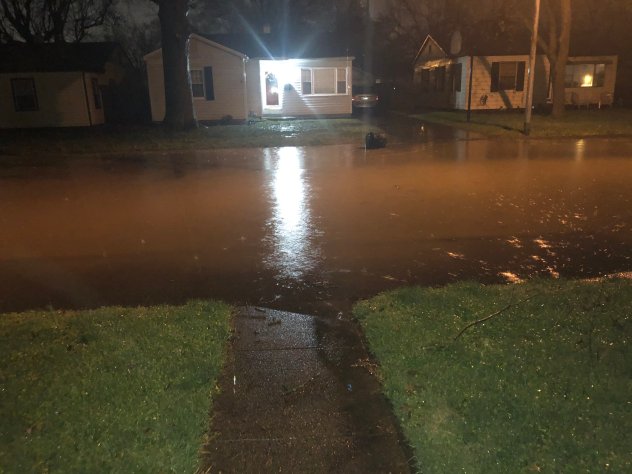 A severe storm capable of spinning up a tornado is tracking extremely close to Evansville, Indiana, and is moving northeast. The storm also has a history of whipping up powerful winds with a 90-mph wind gust clocked in Henderson, Kentucky, as the storm moved through. 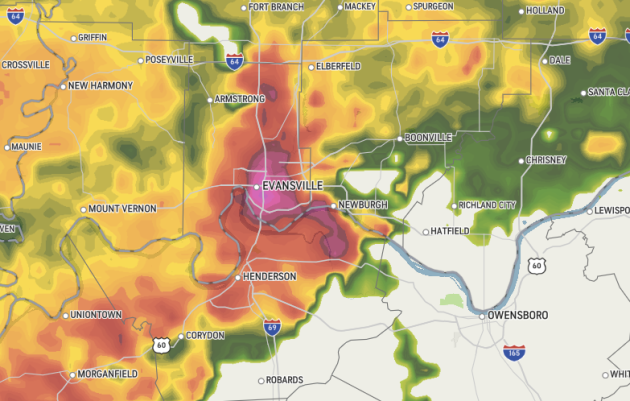 These two images of the Jonesboro tornado were taken just 15 seconds apart and show how fast it was moving and how quickly it grew in size. At least three people have been injured due to the twister, according to The Associated Press.

These images from an Arkansas DOT traffic camera in Jonesboro, Arkansas, were taken 15 seconds apart. (ARDOT)

A line of severe thunderstorms is approaching Memphis, Tennessee, from the west. People in and around the city should seek shelter as the storms could bring wind gusts over 60 mph and frequent lightning. 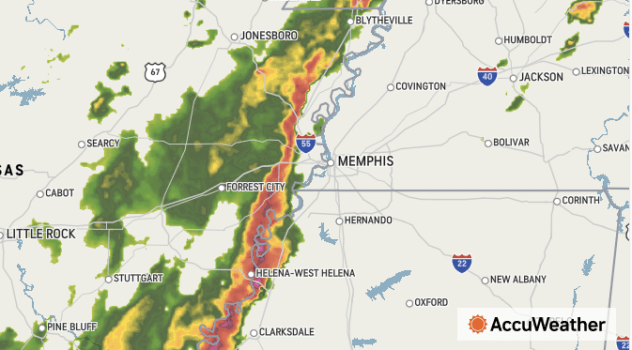 A confirmed tornado is located near Oelwein, Iowa, and moving to the northeast at 50 mph. This tornado is embedded in a line of severe thunderstorms positioned between Waterloo and Cedar Rapids, Iowa.

The severe weather has passed Jonesboro, Arkansas, but the rain continues to fall across the city, which could delay some of the immediate search and rescue efforts underway. There are reports of injuries in the wake of a tornado tracking through the area, but the number and extent of the injuries are unknown at this time. 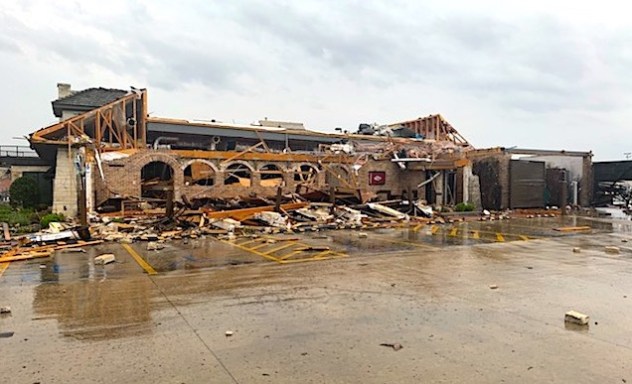 Significant damage has been reported in Jonesboro, Arkansas, including damage to this restaurant.(Twitter/@LTrain501)

Tornado damage is being reported in Jonesboro, Arkansas, after a tornado tracked through the town. There is 'severe damage' in downtown Jonesboro, including damage to buildings and flipped cars, according to emergency managers. A wind gust of 74 mph was clocked at Jonesboro Municipal Airport at 5:05 p.m., CDT, as the tornado moved through the area. 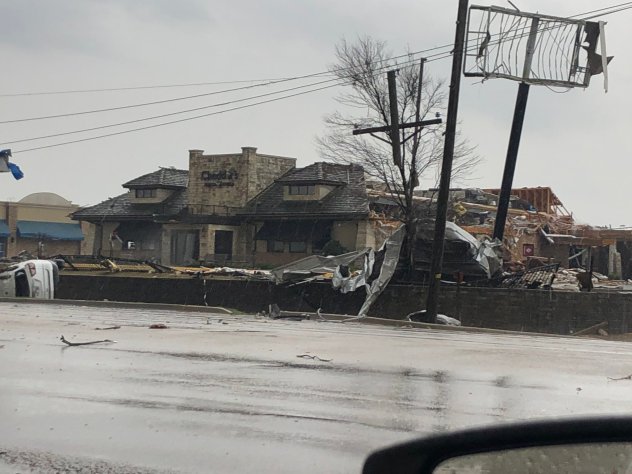 Damaged buildings in Jonesboro, Arkansas, shortly after a tornado tracked through the city on Saturday afternoon.(Twitter/@bricaitlin1)

A confirmed, extremely dangerous tornado is approaching Brookland, Arkansas, as it tracks northeast at 40 mph. This is a life-threatening situation. People in the path of the storm need to seek shelter immediately.

A tornado has been confirmed near Amagon, Arkansas, as a severe thunderstorm moved through the area. This radar image shows Amagon around the time that the tornado was reported. 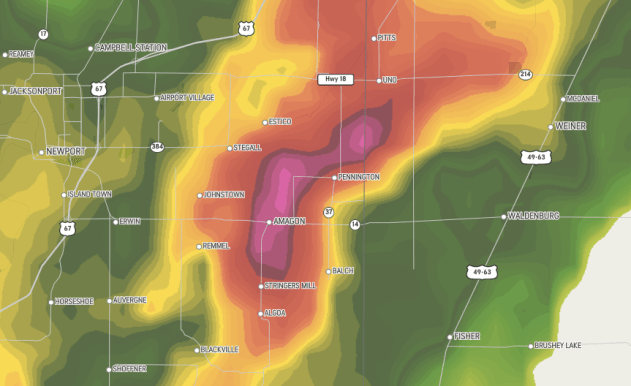 A rain-wrapped tornado has potentially hit the ground near Mingo Junction in Jefferson County, Ohio.

The National Weather Service Pittsburgh issued a warning of reported golf-ball sized hail near Steubenville. They alerted people in the area to take cover. 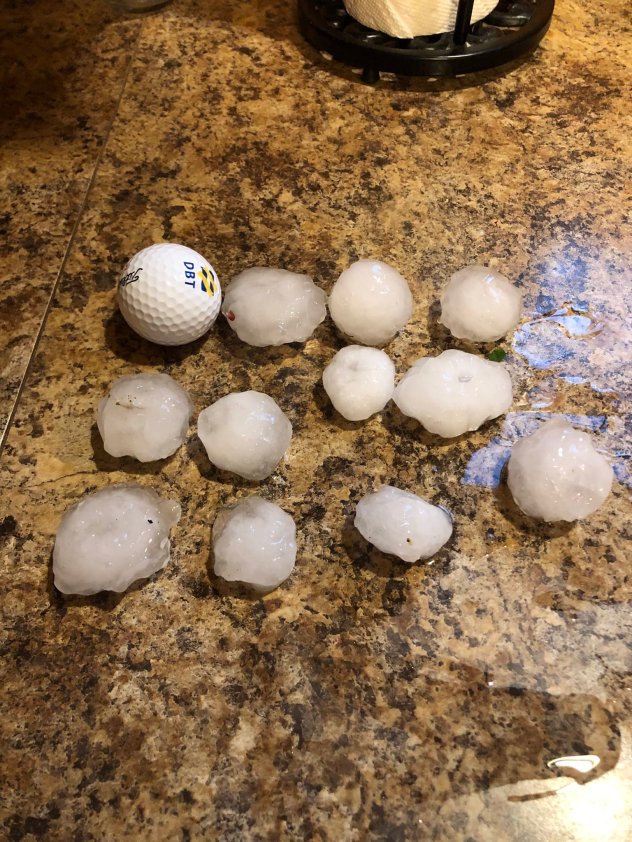 A funnel cloud has been reported by the National Weather Service with a tornado touch down 6 miles southeast of Fontanelle, Iowa, that is moving northeast.

Emergency management of Adams County reported tornado damage near Bridgewater, Iowa. The extent of damage is not yet known.

Multiple reports of hail came in from Hamilton County, Indiana, including Carmel and Noblesville. Hail stones ranged from dime to penny sized.

Trained spotters reported hail up to 1 inch in diameter in Butler and Lawrence counties in western Pennsylvania.

Hail in Slippery Rock Pa 16057. About 2pm. Lasted only about 5m pic.twitter.com/PXWrymp4cN

The first tornado warning of the day was issued in Missouri until 12:45 p.m. CDT.

Severe thunderstorm warnings have been issued for parts of Ohio, Indiana and Missouri, as storms continue to fire up across the central United States. Large hail has been spotted in Akron, Ohio, as well as in Stow, Ohio.

Multiple severe weather warnings have been triggered, there are two in south-central Missouri, as well as one in Indiana and Illinois.

Medina, Ohio, is getting pummeled with hail upwards of 1.75 inches, while 1.25-inch hail has been reported in Sangamon, Illinois.

The airport in Stephenville, Texas, recorded a 48-mph wind gust as a line of gusty storms passed through the area.

6 AM: Line of storms produced a 48 MPH wind gust at the airport in Stephenville. Gusty winds, brief heavy rain and small hail will remain possible as storms approach I-35 over the next hour or two. #ctxwx #dfwwx pic.twitter.com/ddb4J1t7fS

Hail about 4.5 inches in diameter fell over Houston, Missouri, just before 6 p.m., CDT. 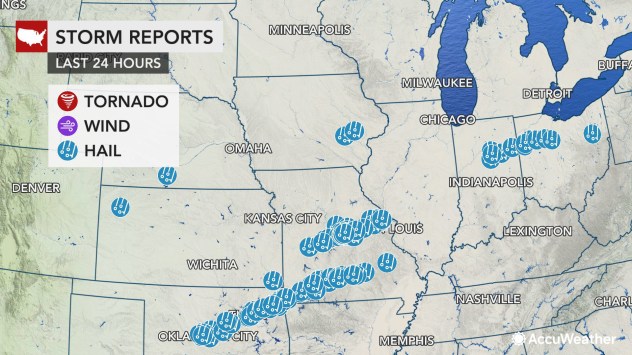 Hail fell over northeastern Oklahoma into southern Missouri, with preliminary reports of hail up to 2.5 inches in diameter damaging cars in Delaware and Mayes counties in Oklahoma.