A potent midweek storm will bring snow to the North and West while the warmer side will be at risk for all types of severe weather, including nocturnal tornadoes and torrential downpours.

AccuWeather forecasters have been watching out for a major severe weather outbreak since last week, and their latest forecast shows a clearer picture of how that outbreak could unfold around the middle of this week.

The severe weather outbreak will be associated with a potent storm that is forecast to swing out of the Rockies and travel across the Plains and Mississippi Valley this week, bringing snowfall to the locations to the north and west. The storm's warmer side will bring the risk of tornadoes in the south-central United States from late Wednesday night through Thursday evening. A number of violent storms can occur after dark on Wednesday, AccuWeather meteorologists warn, and all forms of severe weather are possible. 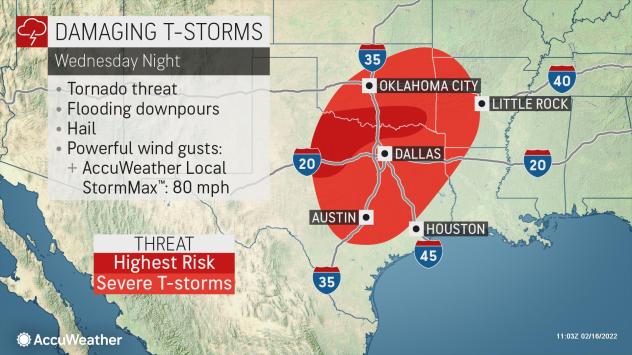 The most common threats from the storms are likely to be powerful wind gusts, with an AccuWeather Local StormMax™ estimated to be 80 mph. There is also the risk of flash flooding and a few storms that could unleash large hail.

Numerous major cities will be in the path of the explosive weather system, including Dallas and Oklahoma City, late Wednesday night. The threat zone AccuWeather forecasters have highlighted for Thursday extends to the east and includes Little Rock, Arkansas, Memphis and Nashville, Tennessee, and even parts of western Kentucky that were hit hard by a historic tornado outbreak in December 2021.

The National Weather Service's Storm Prediction Center (SPC) had labeled the severe weather threat as "slight" as of midday on Monday. The slight risk is considered to be 2 on the scale from 1 to 5 with 5 posing the greatest threat. The threat level may climb into midweek.

The cold side of the storm is likely to unload accumulating snow across a 2,000-mile stretch of the nation, from the Texas and Oklahoma panhandles to Atlantic Canada, as it moves northeastward from mid- to late week.

The first thunderstorms are projected to erupt in central portions of Texas and Oklahoma on Wednesday night and strengthen, expand and shift eastward into the early morning hours on Thursday through northeastern Texas, eastern Oklahoma, western and central Arkansas, and northwestern Louisiana.

During the day Thursday, the severe weather and tornado threat is likely to progress eastward from Louisiana, eastern Arkansas and southeastern Missouri through Mississippi, Tennessee, Alabama and western Kentucky. Severe storms may extend as far to the north as the Ohio River and as far to the east as the southern Appalachians by Thursday night. 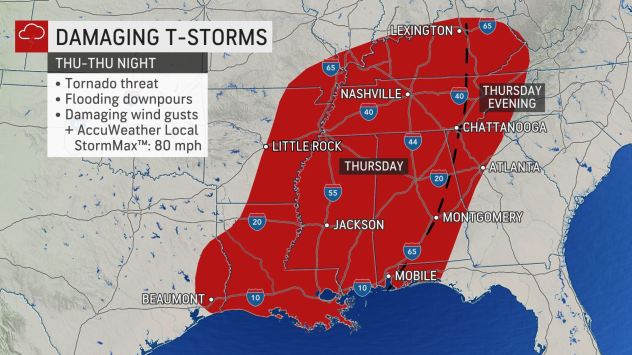 In all, parts of 11 states will be under a threat of severe weather at some point this week.

The jet stream will be configured in such a way to allow strong winds to sweep in dry air in the higher levels of the atmosphere, allowing for dangerous weather conditions.

"This setup creates a high wind shear environment, which typically not only favors thunderstorms with damaging wind gusts but also the potential for tornadoes," Rayno said.

The severe nature of the thunderstorms is likely to produce localized torrential downpours that can lead to flash flooding in the South Central states.

As the storm moves to the northeast and loses some of its potential to produce thunder and lightning, it will still carry enough moisture to be a prolific rainmaker for parts of the Ohio Valley and the central and southern Appalachians. Precipitation that falls across these areas could be significant enough to trigger small stream and urban flooding, particularly in places where snow remains on the ground. 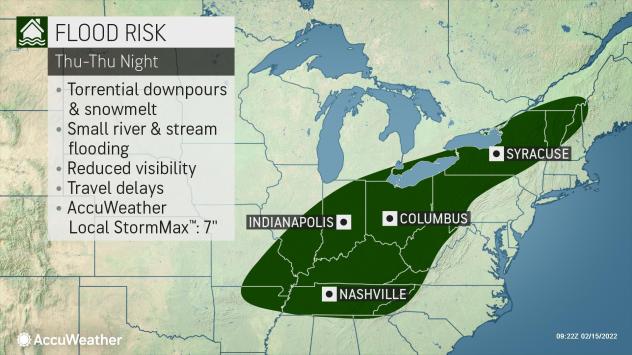 The southern U.S. is no stranger to severe weather outbreaks during February. The combination of a strong storm track, or jet stream, combined with early-season building warmth and humidity levels near the Gulf of Mexico can fuel violent thunderstorms at this time of year.

From Feb. 5-7, 2020, a major severe weather outbreak stretched from Louisiana to Florida and New Jersey. There were close to 700 incidents of severe weather during the three-day event. More than three dozen tornadoes spun up in the Southeast, including multiple EF2 tornadoes with maximum winds estimated to be 135 mph. 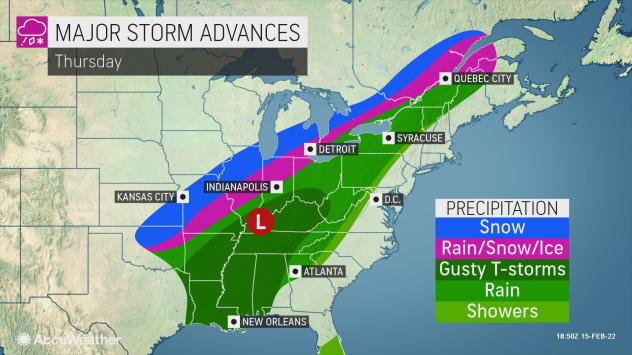 Just last year on Feb. 15, a smaller eruption of severe weather occurred in the Southeastern states and produced four tornadoes, including one rated as an EF3 with winds up to 165 mph.

There were multiple fatalities and injuries during both February outbreaks in 2020 and 2021.

While the coverage and overall risk of severe weather may begin to diminish by Friday as thunderstorms reach the northeastern Gulf, southern Atlantic and mid-Atlantic regions, there may still be storms with locally heavy rain and gusty winds at that time. Unseasonably warm conditions with high winds will lead to a major thaw, the risk of localized flooding and power outages in the Northeast. 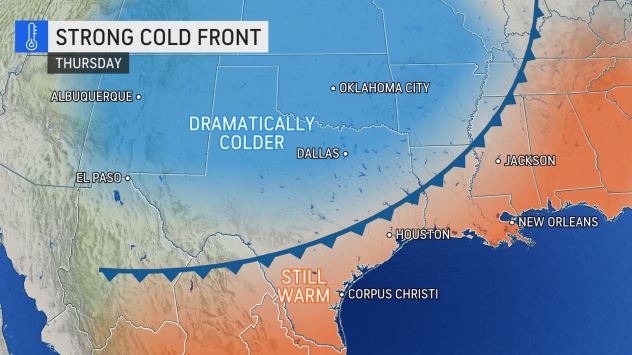 AccuWeather meteorologists recommend that families, individuals and government officials review their severe weather and tornado safety measures in advance of the event. Make sure cell phones are fully charged ahead of the storms and that there is a mechanism to receive severe weather bulletins enabled.

A press of colder air from the northwest to southeast across the South Central states from Thursday to Friday will end the severe weather threat. The front may get hung up in Florida this weekend and that could lead to showers and thunderstorms for activities related to the Daytona 500.

Preceding and following the risk of severe weather in portions of the southern Plains will be gusty winds in the clear air. The combination of dry air, dead brush and gusty winds will result in an elevated wildfire risk through much of this week.

Shipyard looks frozen in time, but plenty is going on below the surface

Another home along the Outer Banks crumbles into the Atlantic