Nor'easter wallops New Jersey to Maine, cuts power to more than half a million.

Study after study show AccuWeather forecasts are the most accurate, reliable for the protection of life and property among top weather providers.

AccuWeather Global Weather Center, January 14, 2020 — In the latest and most comprehensive statistical analysis of forecast accuracy ever undertaken, independent forecast tracker ForecastWatch reconfirmed the Superior Accuracy of AccuWeather forecasts by a significant margin over the next five sources of weather forecasts in all categories examined. The study analyzed 120 million forecasts from over 1,000 locations globally over a four-year period ending December 31, 2018, and AccuWeather was found to be the clear winner as the most accurate provider of weather forecasts in temperature, precipitation and wind speed– a clean sweep of all categories -- for a 1-5 days-out forecast period.

This comprehensive test analyzed data collected regarding weather forecasts in 1,108 locations around the world. For both 24-hour high- and low-temperature forecasts, AccuWeather was the most accurate provider with the lowest average of absolute error and the greater percentage of forecast accuracy within 3 degrees of actual temperature observations.

The study, which covered the period of January 1, 2015 through December 31, 2018, also examined precipitation forecasts and AccuWeather’s accuracy was found to be “noticeably higher than the next four providers and significantly higher than Dark Sky,” according to the report.  “AccuWeather stood out as the most accurate wind speed forecaster during the 48-month period of analysis” with the lowest average absolute error, performing 28 percent better than the next closest provider. Other providers included in the report in addition to AccuWeather and Dark Sky were The Weather Channel, Weather Underground, both owned by IBM, Foreca and Intellicast.

“We are proud to provide the most accurate and actionable forecasts available  for our users and clients to help them make the best decisions, protect their families, reduce losses, and increase profitability, when weather is a factor,” said Marshall Moss, AccuWeather Vice President of Forecasting and Graphics Operations. “People as well as businesses and government agencies globally depend on AccuWeather forecasts, and this latest study from ForecastWatch proves their trust in the AccuWeather forecast is well-founded.”

The independent analysis by ForecastWatch, the world’s premier weather forecast monitoring and assessment service, provides additional clear, concrete evidence that AccuWeather's forecasts are superior to all other sources and, as a result, bring the most significant benefits to people and businesses.

“The disruptive impact of weather on lives and businesses is significant,” said Dr. Joel N. Myers, AccuWeather Founder and CEO. “We are extremely proud of our track record of forecast accuracy, but the margin of exceptional value we provide goes well beyond what is demonstrated in this latest independent report. Our weather forecasts are more localized than other sources, more detailed, and extend further into the future.” “The powerful combination of accuracy and detail, both in location and time, and AccuWeather’s emphasis on how predicted weather conditions will impact its users and business clients, make AccuWeather’s forecasts many times more valuable than our statistical advantages proven in this latest study,” he continued.

As an example, Myers explained that while other sources may provide a weather forecast for New York City, AccuWeather forecasts are available for up to 279 different neighborhoods within New York City. “The detail and hyper localization we offer means we deliver accuracy and value not even captured in this or any other statistical comparison,” he said.

Myers added that in study after study, this latest report once again validates the important work of AccuWeather and demonstrates when users and customers choose AccuWeather, they are choosing the very best, most dependable source for the protection of life and property in the face of hazardous weather. Just prior to this ForecastWatch report, the industry tracker concluded in an 18-month study ending in June 2019 that AccuWeather had the most accurate weather forecasts in another victory of all categories tested – high- and low-temperature and wind speed forecast accuracy.

AccuWeather’s leadership in forecast accuracy is the foundation on which all its innovative products and services are built. The patented AccuWeather MinuteCast® forecast, for example, gives users precipitation forecasts up to two hours ahead with precise start and stop times for every location. And in addition to hour-by-hour forecasts, AccuWeather offers forecasts that extend farther into the future than any other source, all the way up to 90-day forecasts that are highly popular with users who like to plan ahead.

AccuWeather's proven Superior Accuracy is achieved by exclusive patented technology, the largest collection of global forecast models and data, leading-edge predictive AI and machine learning, and the best IP and procedures developed and refined over the company’s 57-year history, combined with the most talented and experienced group of meteorological forecasters anywhere. AccuWeather employs more than 100 expert meteorologists who work as forecasters as well as throughout other parts of the company.

In addition to helping people remain safe and prepared, AccuWeather’s weather forecasts and warnings also help thousands of businesses. AccuWeather works with more than half of the Fortune 500 companies and thousands of other businesses and government agencies globally to keep customers and employees safe, minimize losses and liability, save costs, improve efficiency and significantly outperform their competitors with uniquely valuable insights.

In business to help keep people safe, AccuWeather is dedicated to innovation and has developed many scientific breakthroughs and life-saving innovations, such as its exclusive AccuWeather RealImpact™ Scale for Hurricanes, a six-point scale, including a rating of less than one, to better communicate the impacts of hurricanes and tropical storms.  Unlike the widely used Saffir-Simpson scale, which only uses wind speed, the RealImpact Scale incorporates a variety of factors to communicate the threat of a hurricane, such as flooding rain, storm surge and total damage and economic loss in addition to wind speed.

Some recent examples of AccuWeather’s dedication to forecasting and communicating with Superior Accuracy include:

August/September 2019 – Days in advance, AccuWeather correctly predicted Hurricane Dorian would be a 5 on the AccuWeather RealImpact Scale for Hurricanes when it devastated the northern Bahamas and a 2 across the southeastern United States. AccuWeather’s forecasting accuracy led to a week’s advance notice of the threat that wreaked havoc on the Bahamas, warning of flooding, coastal inundation, building, structural and tree damage. The company received many expressions of gratitude from emergency planners and the public for the early warnings.

October 2019 – AccuWeather correctly predicted the landfall location of Super Typhoon Hagibis, which devastated the Kanto region of Japan, many days in advance, with a 6-day track error of 60 miles and a 4-day forecast that was nearly identical to the actual landfall location. Important impacts were communicated by AccuWeather including expected flash flooding, damaging winds, mudslides and travel disruptions. AccuWeather also cautioned about possible evacuations. In Tokyo, AccuWeather predicted wind gusts would be 80-100 mph and 6-12 inches of rain. Actual observations were 93 mph wind gusts and 9 inches of rain.

February 2019 –Well in advance of a major snow and ice storm, AccuWeather’s long-range forecasting and meteorology team warned of a northeast storm’s impact as early as one week prior to the event. The company’s impact-driven forecasts accurately conveyed the significant winter weather and its effect on people and businesses, including widespread power outages, slow and slippery travel conditions and a period of heavy snow and substantial buildup of ice. While there was major disruption to much of the northeast, AccuWeather accurately predicted there would be little impact in New York City, which ultimately only received 1.2 inches of snow. Other sources predicted up to 6 inches of snow.

Forbes magazine dubbed ForecastWatch “the JD Power of weather prediction” and, according to Myers, these latest studies, in addition to numerous real-life examples of forecast accuracy, demonstrate once again why AccuWeather forecasts are the most trusted to provide actionable insights to help people and business better cope with the impact of weather. 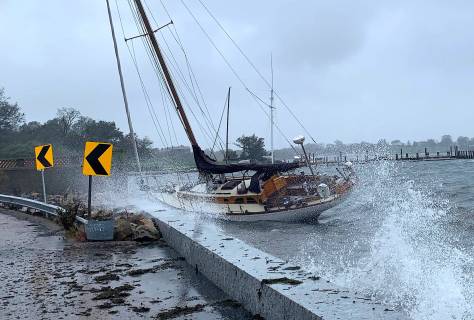 "This was an impressive storm." Hundreds of thousands were left in the dark after the early-season storm rattled New England. 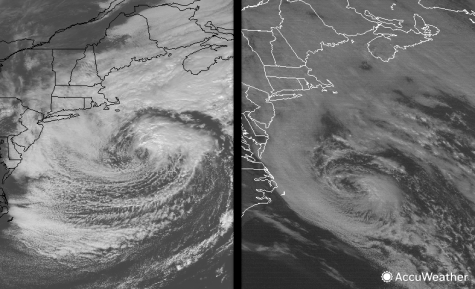 This week's damaging nor'easter hearkens back to a similar storm from 30 years ago, but this one could go tropical, using the last available storm name. 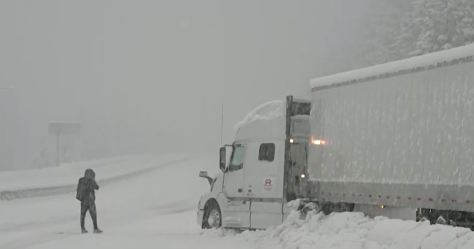 Historic snowfall totals and record-breaking rainfall amounts not only left a mess for residents in the West but also is changing the opening dates for one major industry in the region. 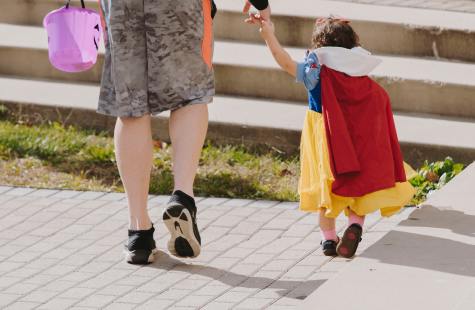 Rain on Halloween? Gear to get you through any weather

No matter the weather, there's plenty of ways to get you more into the spooky spirit. 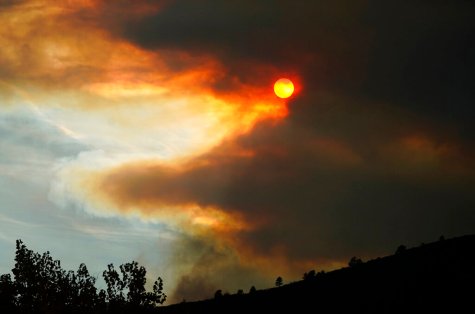 Next time you think we have it hard today, remember what life was like during this truly terrible year. Even after it ended, a decade of pain and suffering followed. 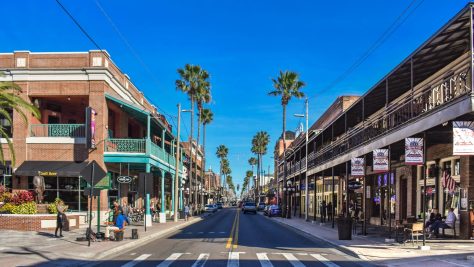 It's one of the biggest and most populated areas on Florida's Gulf Coast, but it hasn't been directly struck by a landfalling hurricane in 100 years.