Why have Midwestern cities banned a beloved winter pastime?

In most cities, sledding is allowed. In other, there are rules against the winter pastime.

As snow piles up in yards and parks across the United States this winter, many children will be hitting their neighborhood hills to sled on their days away from school. Common injuries caused by the time-honored winter activity, however, have led some cities in the Midwest to place a ban on sledding.

According to a study from The Center for Injury Research and Policy (CIRP) at Nationwide Children's Hospital, more than 20,000 Americans younger than age 19 receive treatment for sledding-related injuries each year.

Some cities in Nebraska, Iowa, Illinois and Indiana have banned sledding on steep hills in recent years. Other municipalities have posted warning signs cautioning people to sled at their own risk. 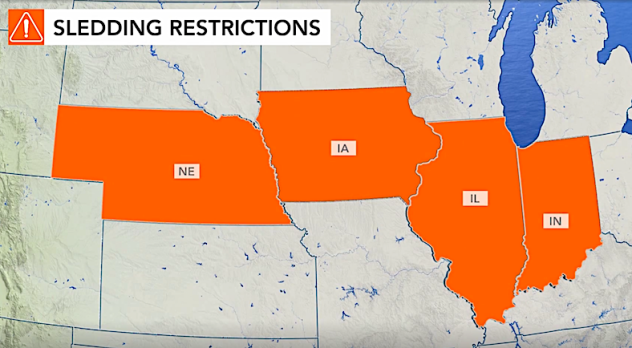 Midwestern states where some municipalities have sledding restrictions in place. (AccuWeather)

Dubuque, Iowa, is among the cities that have banned the pastime in previous years. In 2015, the city council voted to ban sledding in 48 of the city’s 50 public parks. Violators at the time would risk a fine of $750.

"Sledding is a time-honored tradition in cities that have hills (but) sledding is a risky activity," the Dubuque city manager wrote in a letter in 2015, TODAY reported at the time.

The cities began taking action against sledding after some high-profile lawsuits involving sledding accidents were filed in recent years. Some have cost the cities millions of dollars in settlements, including cases against Omaha, Nebraska, and Sioux City, Iowa, TODAY reported. 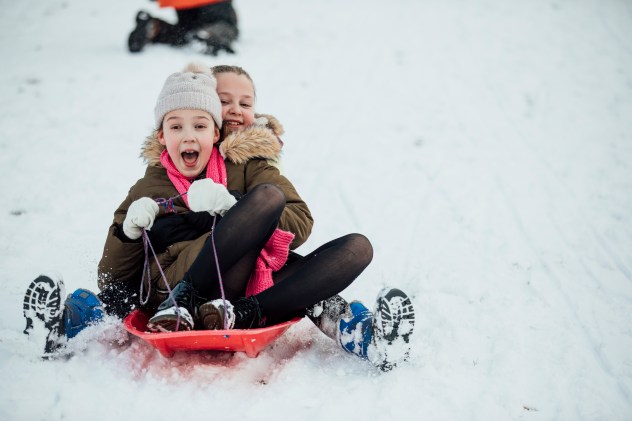 Two little girls are going down a snowy hill together on a sleigh. (Photo/Getty Images/DGLimages)

"Even in the places [where sledding is] banned, we are going to see people trying to enjoy this activity," Maureen Vogel, director of communications for the National Safety Council (NSC), told AccuWeather's Emmy Victor. "We just want to make sure if that's the case that people are doing it as safely as they can."

The most common injuries caused by sledding are concussions, broken bones and frostbite, according to the NSC. Injuries can be prevented by wearing helmets, dressing warmly and sledding feet first.

The NSC recommends parents do not leave children under the age of 10 to sled unattended. To ensure safety, the group suggests that parents ensure all sledding equipment is in good condition, with no cracks or sharp edges.

The council also suggests selecting "spacious, gently sloping hills with a level run-off at the end so the sled can safely stop" and to inspect the slopes prior to check for gaps, fences or anything else that could obstruct the ride. It also warns against sledding near frozen bodies of water.

Vogel also said the NSC recommends people purchase sleds that are outfitted with some sort of braking and steering mechanisms.

"They're not terribly expensive, and they're very much worth the investment," Vogel explained.

When local government is more punishing than Mother Nature
Masterpieces rise again on Florida beach after weather disaster
'The totality of the evidence is unambiguous': Arctic undergoing transformation