After bringing deadly impacts to Mexico as a hurricane, the storm lost wind intensity while pounding the Golden State — and it came close enough as a Pacific tropical storm to make the history books.

Tropical Storm Kay unleashed intense winds, flooding rains and even scorching temperatures to drought-stricken California on Friday after bringing deadly impacts to Mexico. As the storm was downgraded to a tropical rainstorm on Saturday, thousands were still without power in California and scenes of havoc were left behind following the storm's record rainfall.

It wasn't just the precipitation from the storm that was notable as it took a historically close track nearing the Golden State. Kay marked the closest approach to Southern California from the Pacific in the last 50 years. The next to last point tracked by the National Hurricane Center on Sept. 10 was 130 miles offshore from San Diego, making it the closest pass to the city from the ocean side since records began in 1949, according to Jesse Ferrell, AccuWeather senior weather editor and meteorologist. The runner-up was Tropical Storm Hyacinth in 1972, which was a little farther out to sea but slightly farther north.

“Our ocean water comes down from Alaska, and that cold water drains the energy out of these tropical storms and hurricanes," Abbott said. "Now, right now, we're just going through an extended heat wave, heat period, so we have ocean temperatures out here above 80 degrees. That provides some energy that allows these tropical storms to come farther north."

Tropical Storm Kay delivered nearly a year's worth of rain across Southern California, shattering daily rainfall records. In San Diego, 0.63 of an inch of rain was measured on Friday, which crushed the previous record of 0.09 of an inch set back in 1976. This was also the wettest day in the city since Dec. 14, 2021, when 0.98 of an inch fell.

According to the Desert Research Institute's Western Regional Climate Center, the probability of the city receiving 0.5 of an inch of rain in one September day is almost zero, with Kay smashing all normal expectations of the month. The Climate Center has categorized the San Diego rainfall from Kay as "extreme," as the city typically sees most of its rain in the winter months. On average, February is the wettest month, with 2.02 inches of precipitation typically falling in San Diego, while in September, the average amount of rainfall is only 0.12 of an inch.

Rainfall farther inland over California was even more intense. On Friday, Mt. Laguna, located about 55 miles east of San Diego and about 6,000 feet above sea level, measured 5.60 inches of rain on the mountain's Piñon Point. Mt. Laguna proper measured 4.92 inches of rainfall.

As the rain came down on the arid landscape, including areas scarred by wildfire burns, violent flash floods erupted. Extreme Meteorologist Reed Timmer intercepted raging floodwater and debris flowing along Interstate 8, west of Ocotillo, California, which is near the California-Mexico border.

Timmer reported the flood was growing exponentially, with small boulders blocking portions of the interstate's westbound lane. In a video he shared on Twitter of the flash flood, a violent current of water could be seen rushing in front of the camera as the rain continued to pour down. 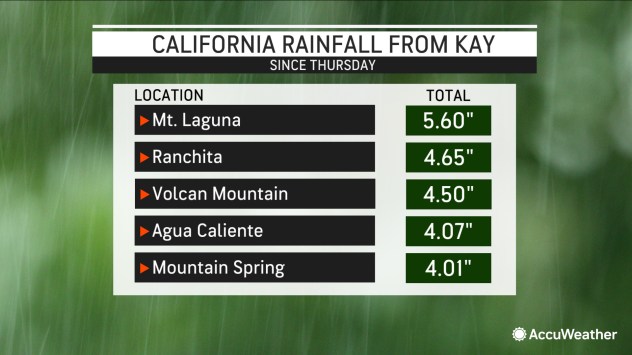 Although the heavy rain triggered flash flooding, it also provided much-needed help to firefighting efforts. The Fairview Fire was almost entirely uncontrolled, spreading rapidly and killing at least two prior to Kay's arrival. But as the rain started to fall, the situation quickly improved. According to the California Department of Forestry and Fire Protection (CAL FIRE), the fire was 49% contained as of Monday morning. The wet conditions will prevent the fire from spreading as quickly as it originally had, and according to local officials, the fire may be completely contained within the next few days.

As San Diego was experiencing its rainiest day in five months, a lear jet skidded off the runway at the Naval Air Station, just outside the city. The FAA and NTSB are investigating the cause of the accident, including if the weather was a factor, according to NBC7, a local news station based in San Diego. The two people aboard the plane were not seriously injured, NBC7 noted.

Multiple trees, branches and power lines were downed throughout several San Diego suburbs. Wind gusts were 30 to 50 mph at lower elevations, with gusts as high as 110 mph on mountain tops. 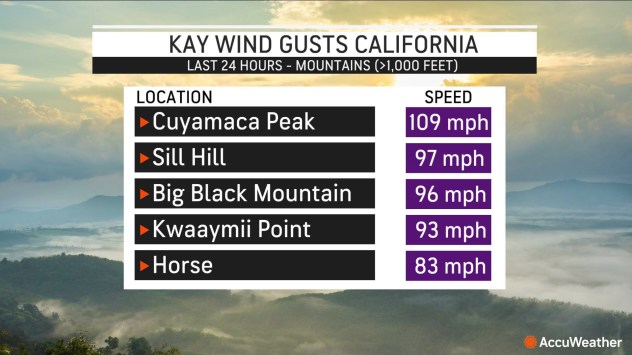 Power outages in California topped 63,700 early Saturday morning, but by the same time on Sunday, the number of outages in Southern California were below 1,000, according to PowerOutage.US.

The extreme weather and rain led to the postponement of Alicia Key's concert at the San Diego State University Cal Coast Credit Union Amphitheater. Keys wrote on her social media pages, "I'm so bummed to announce that tonight's show will have to be postponed due to severe weather."

According to the San Diego Union-Tribune, Kool & The Gang's sold-out outdoor show was moved from an outdoor concert venue to an indoor event center.

But the weather didn't stop Keith Urban from performing at the outdoor North Island Credit Union Amphitheater Friday night. One fan shared a photo of two concertgoers in blue ponchos on Twitter, writing, "When a hurricane turned tropical storm is here, but you have tickets to Keith Urban…you improvise."

Friday's Major League Baseball game between the San Diego Padres and the Los Angeles Dodgers was put into a rain delay. The delay after what a local reporter termed a "brief burst of rain" over downtown San Diego was the eighth such delay in Petco Park history since the park's opening in 2004. After the 45-minute delay and drizzle that came down for the game's first three innings, the hometown Padres defeated the rival Los Angeles Dodgers 5-4 in an extra-inning affair. 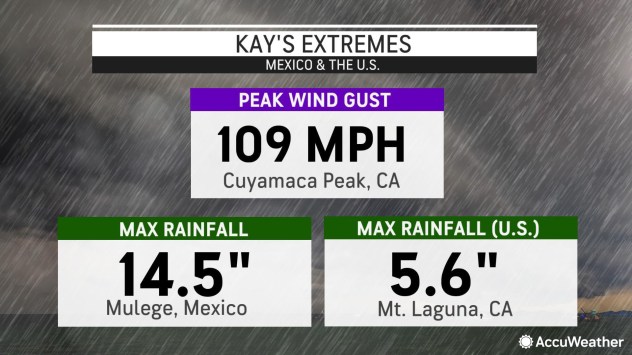 According to the National Weather Service office in Los Angeles, since it was so hot, many residents in Los Angeles County did not see any rain for the first few hours of Kay's impacts because the precipitation evaporated before hitting the ground.

Before Kay made its mark on the U.S., it had already wreaked havoc across Mexico, where it had made landfall as a Category 1 hurricane Thursday afternoon. The storm crashed ashore near Bahia Asuncion with maximum sustained winds of 75 mph. Within a few hours of landfall, Kay had weakened to a tropical storm as it continued to move along the west coast of Baja California.

Torrential downpours from Kay caused flooding across the majority of Baja California. A video from Mulege, Mexico, which is located on the coast of the Gulf of California, showed houses nearly completely submerged by the floodwaters. The heavy rain continued on Friday as the storm churned toward Southern California.

Officials in Mexico are blaming three fatalities in the southwestern state of Guerrero on Kay, according to Reuters. Impacts from Kay started on Saturday, Sept. 3, in southwestern Mexico. Heavy rain caused flooding and strong winds knocked down trees resulting in numerous power outages. According to the Guerrero Civil Protection, two adults and a child died when their vehicle was swept away by floodwaters in a rural area of Acapulco, which is a coastal town located 230 miles south of Mexico City, Reuters reported.

Weather conditions will gradually improve across Baja California and Southern California through the week. AccuWeather forecasters say as temperatures return to seasonable levels, dangerous seas and rip currents will likely persist along the western-facing shores into early this week. Less moisture in the air is also expected later this week, keeping chances for showers and thunderstorms low.