Strong winds and heavy rain blasted parts of the Philippines as Super Typhoon Rai swept through the region on Dec. 16.

Super Typhoon Rai rapidly strengthened as it made a beeline for the Philippines Thursday, local time, reaching the equivalent strength of a Category 5 hurricane on the Saffir-Simpson Hurricane Wind Scale (maximum sustained winds of at least 156 mph or 250 km/h) before making landfall over Siargao Island during the afternoon hours. Rai is known locally in the Philippines as Odette.

The International Federation of Red Cross and Red Crescent Societies (IFRC) called Rai "one of the most powerful storms to menace the Philippines in recent years" that threatened "to hit coastal communities like a freight train." The IFRC stated that teams from the Philippine Red Cross were working around the clock to distribute relief supplies and ensure rescue vehicles and first-aid teams were in place. 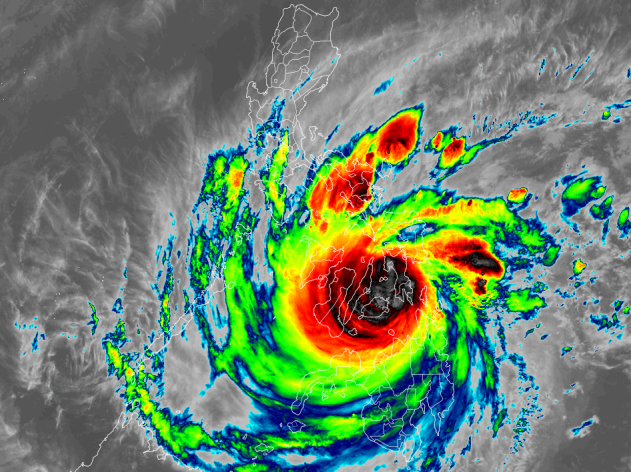 "Filipinos are tough, but this super typhoon is a bitter blow for millions of people who are still recovering from devastating storms, floods and COVID-19 in the past year," Philippine Red Cross Chairman Richard Gordon said.

The death toll from the typhoon stood at 12 as of Friday night, local time, according to AFP.

Nearly 100,000 residents were ordered to evacuate ahead of the storm, and authorities delayed COVID-19 vaccinations of millions of people who are in the path of the storm, Reuters reported. The country's second three-day vaccination drive which began Wednesday was cut from 17 regions to six due to the approaching typhoon. 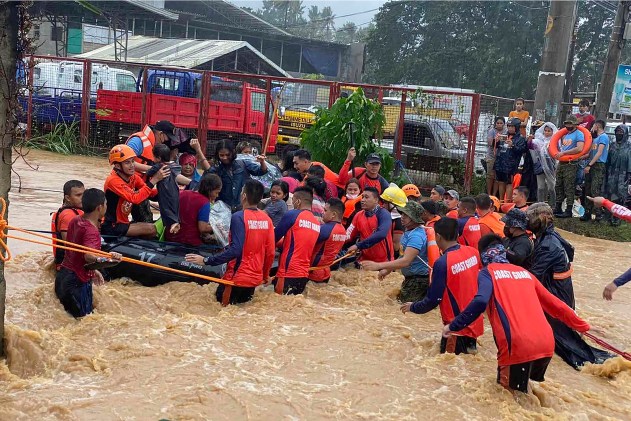 Power outages and flooding have been reported as the typhoon continues to charge across the southern Philippines, Reuters reported.

Footage from the Philippine Coast Guard showed a harrowing rescue of a 1-month-old baby in floodwaters in Cagayan de Oro. The two members of the coast guard were seen pushing along what appeared to be a barrel with the baby in it through the chest-deep floodwaters. Another video showed rescuers carrying a person through swiftly moving floodwaters and safely onto a vehicle.

The impacts of Rai have prompted the Philippines' disaster mitigation agency to put eight regions in the Visayas and Mindanao areas in the highest warning level for emergency preparedness and response protocol, according to Al Jazeera. Work and online classes have been suspended in some areas, including in Cebu. 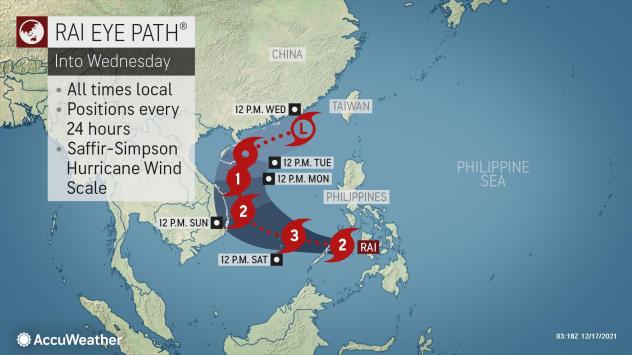 Rai became a tropical storm Monday over the southern Philippine Sea, an area that AccuWeather's international team of forecasters had been monitoring for tropical development for more than a week. Rai had reached typhoon strength by midweek, strengthening further to a super typhoon Thursday as it closed in on the Philippines.

Either way, Rai was a monster of a storm as it crashed ashore, and forecasters warn that its impacts are far from over. 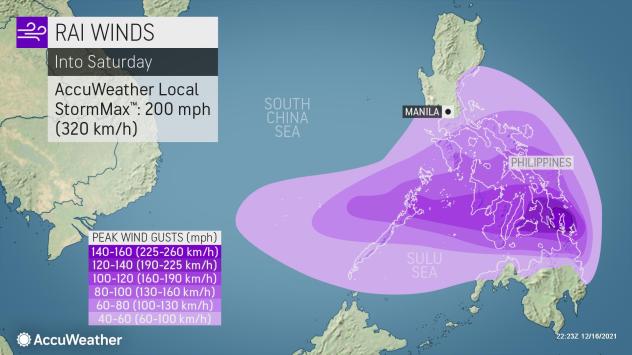 Cities including Cebu and Iloilo will experience the full force of the storm into Friday. Wind gusts of 120-160 mph (190-260 km/h) are expected along the path of Rai. Near the point of landfall, an AccuWeather Local StormMax™ wind gust of 200 mph (320 km/h) was predicted.

Strong winds could topple trees onto roadways or power lines, and power outages will result. Weaker structures can also undergo damage to roofs and exterior walls.

Heavy rain can also lead to additional flooding across the southern and central Philippines. Rain totals can reach 4-8 inches (100-200 mm) in many areas, with an AccuWeather Local StormMax™ rainfall of 22 inches (550 mm) expected in the hardest-hit areas. The heaviest rain is expected along a swath extending about 100 miles (160 km) to the north and south of Rai's track. 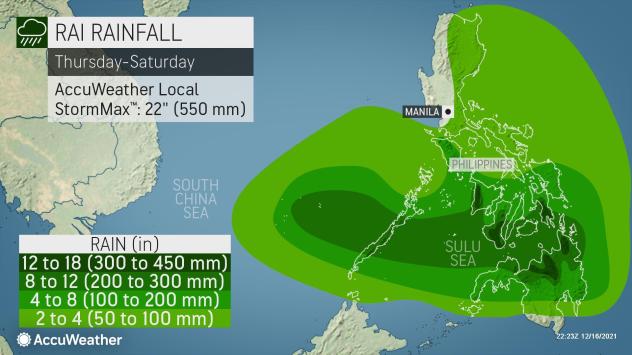 This rain can wash out roads and cause mudslides in mountainous terrain. Forecasters also warn that rivers can quickly rise and flood low-lying roads.

In addition to flooding from rainfall, a storm surge that could reach several feet in height (up to 4 meters) is expected to cause coastal inundation near Rai’s track as the strong winds from the storm push water onto the coast. 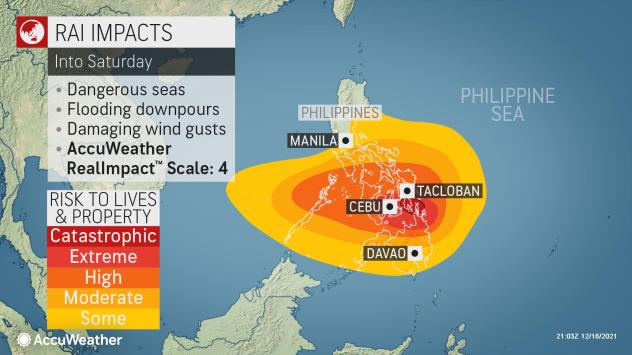 Due to the impacts from the rain, wind and storm surge, Rai has been rated as a 4 on the AccuWeather RealImpact™ Scale.

Rai became the first typhoon with the equivalent strength of a Category 5 hurricane in December since Typhoon Nock-ten (known as Nina in the Philippines) caused devastation in the Philippines around Christmas in 2016.

While Rai is expected to lose wind intensity as it curves to the north across the South China Sea, meteorologists say residents of eastern Vietnam and southern China should monitor the storm and be ready to make preparations should Rai approach land. It is possible that Rai will brush eastern Vietnam and Hainan with rain and wind from Sunday into Monday.

Prior to Rai, the last named storm to directly impact the Philippines this season was Severe Tropical Storm Kompasu, known as Maring in the Philippines, during the first half of October. This storm made landfall near Fuga Island in the northern Philippines on Oct. 11 before venturing across the South China Sea and making a second landfall along the east coast of Hainan.