Thunderstorm puts on a lightning show

Lightning flickered in the night sky as a thunderstorm rolled through Sydney, New South Wales, on Nov. 16.

As tropical activity begins to wane in other parts of the globe, AccuWeather forecasters are focusing their attention on the northern Indian Ocean where several systems may take shape this coming week.

The first system to form in the basin this week was Gati. This system first developed into an area of low pressure on Thursday, according to India's Meteorological Department. Early Sunday morning, local time, the system strengthened into a depression. Just a few hours later, the system became a deep depression and then strengthened even further into Cyclonic Storm Gati. Development of this system exploded on Sunday and around 12 hours after first becoming a depression, Gati was a severe cyclonic storm.

Meteorologists say this system was able to strengthen so rapidly because it is located in an area of warm water and low wind shear.

Ocean temperatures and wind shear, or the change in wind speed at different levels in the atmosphere, are two factors that help determine whether a tropical system will develop, gain additional strength or fall apart.

The exact impacts in places such as eastern Africa and the Arabian Peninsula will depend on the strength and track of the storm.

As the system becomes compact and more powerful, it may bring intense rainfall to a smaller portion of these regions, which could also increase the risk for flash flooding where the storm tracks. Socotra, Somalia and Yemen would be the most likely areas to receive tropical downpours in this scenario.

A stronger storm will also produce dangerous winds, which could lead to damage to trees and structures. Strong winds can also churn up large waves across the northwestern Arabian Sea and Gulf of Aden, creating hazardous boating conditions.

This may not be the only tropical system to develop in the northern Indian Ocean by early this week as AccuWeather forecasters are also watching the Bay of Bengal. 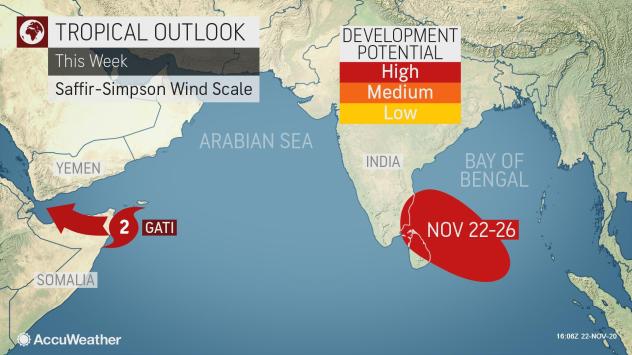 "There is also a chance for a tropical low to form over the southern Bay of Bengal over the weekend," stated Nicholls.

Decreasing wind shear over the Bay of Bengal can create an environment more conducive for tropical development, which could allow this low to develop into a tropical depression late this weekend or early next week.

"Regardless of intensity, this system can bring enhanced rains to southern India and Sri Lanka around the middle of next week," Nicholls warns.

Conditions may remain favorable for tropical development across the Bay of Bengal into early December.

Tropical activity usually picks up this time of year in the northern Indian Ocean once the southwest monsoon weather pattern recedes. The southwest monsoon typically occurs from June to October and is responsible for bringing wet weather to India throughout the summer.