Hurricane Orlene, the 16th named storm of the East Pacific hurricane season, formed last Thursday morning. AccuWeather forecasters say the storm will continue to bring heavy rain and gusty winds to portions of Mexico early this week. Moisture from Orlene may even go on to work its way into the United States.

Orlene made landfall on Monday morning as a Category 1 hurricane on the Saffir-Simpson Hurricane Wind Scale. Orlene came ashore in southwestern Mexico, just north of the border between the states of Nayarit and Sinaloa. At the time of landfall, Orlene had maximum sustained winds of 85 mph (140 km/h). 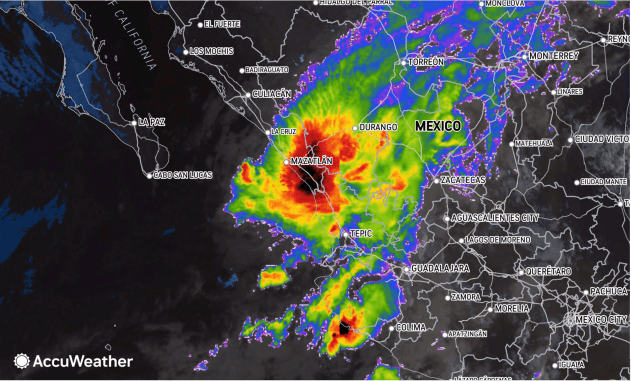 While Orlene made landfall as a Category 1 hurricane, the cyclone was much stronger for a time this weekend. Saturday night, Orlene rapidly strengthened to a Category 4 hurricane on the Saffir-Simpson Hurricane Wind Scale. The hurricane remained at this ferocious strength for a time before encountering an environment hostile to tropical development.

Even though Orlene will diminish from a tropical storm on Monday afternoon to a tropical rainstorm by Tuesday, the risk to lives and property will continue. As of 1 p.m. CDT on Monday Orlene's sustained winds had diminished to 50 mph.

"Widespread 2-4 inches (50-100 mm) of rain will be possible in the states of Sinaloa, Durango and Chihuahua," AccuWeather Meteorologist Alex DaSilva said. 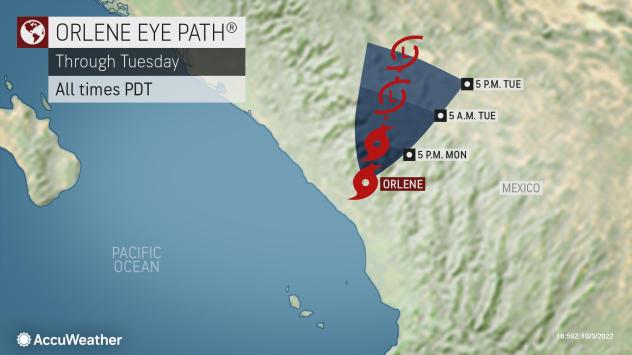 Given the compact nature of Orlene, the heaviest rain from the storm is expected to target areas right along its path. In south-central Sinaloa, as well is in areas immediately south of Puerto Vallarta, rainfall amounts of 4-8 inches (100-200 mm) are expected, with an AccuWeather Local StormMax™ of 15 inches (380 mm).

While these regions of Mexico are not strangers to rain, Orlene can unload close to a month's worth of rain in some areas over the course of just a few days. This level of rainfall can quickly lead to flash flooding concerns as well as the risk of mudslides in the higher terrain. 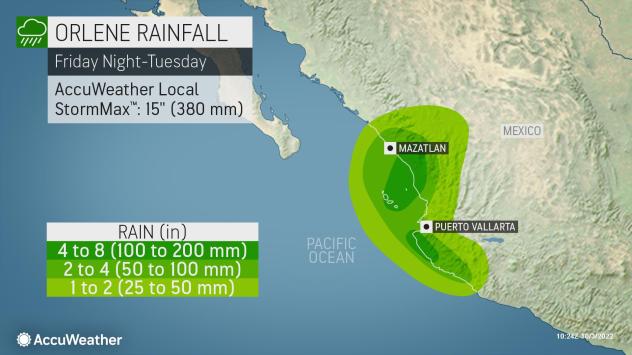 Mazatlán, Mexico, for example, typically records just over 6.50 inches (165 mm) of rain throughout September. Matazlán is expected to pick up widespread rainfall amounts of at least 2-4 inches (50-100 mm) as Orlene approaches and tracks near the area into the new week. 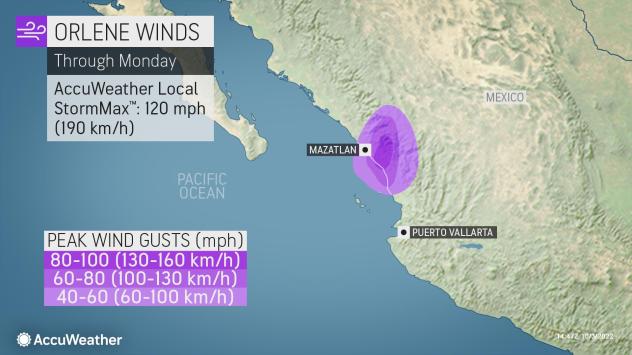 Hostile environmental conditions will continue to be detrimental to Orlene, but the hurricane will still remain formidable as it slams the coastline on Monday. Due to the strength and forward speed of Orlene, dangerous storm surge will also impact coastal areas on Monday.

Given the potential for heavy rainfall, damaging wind gusts and storm surge, Orlene is a 2 on the AccuWeather RealImpact™ Scale for Hurricanes in Mexico. 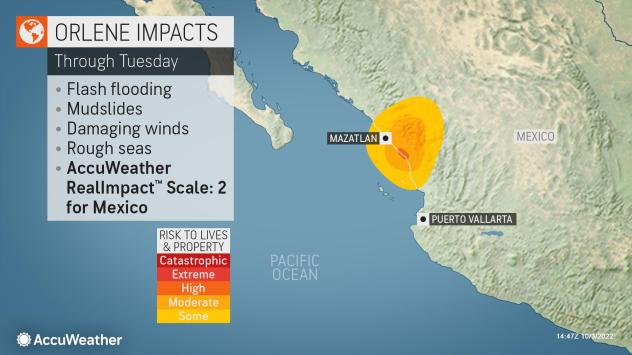 The last time a hurricane churned in the basin was back in early September when Hurricane Kay brought torrential rainfall to Mexico's Baja Peninsula and went on to cause significant flooding in portions of the far southwestern U.S.

While Orlene is set to take a much different track than Kay, forecasters say some moisture from the cyclone will continue to creep into the Southwestern states over the next several days.

"The track of Orlene once it nears Mexico will influence how much - if any - of its moisture makes its way into the U.S.," AccuWeather Senior Meteorologist Dan Pydynowski cautioned.

Forecasters say the wind direction at the middle levels of the atmosphere will allow some moisture from Orlene to travel into portions of the Four Corners region early this week. This moisture can serve to enhance downpours in any thunderstorms that manage to develop across the region. Given the desert climate, any downpour can lead to dangerous flash flooding concerns.