Tropical Storm Ian has formed in the Caribbean Sea, expected to become a hurricane threat for Florida.

Grace wasted little time making its name known over the weekend, strengthening from Tropical Depression 7 to a tropical storm in less than a day. As Grace entered the new week situated just south of Hispaniola, it threatened to strike a costly blow to areas already in the midst of extensive recovery.

Still reeling from a magnitude 7.2 earthquake that struck over the weekend, residents and rescue teams in Haiti now face a tropical threat. Saturday's temblor has killed over 1,400 people, injured 6,900 others and destroyed thousands of homes.

While Grace was a tropical depression for the entirety of Monday, it was able to regain wind intensity and become a tropical storm once more very early Tuesday morning. On Monday and Monday night, Grace packed the potential to induce widespread flooding and mudslides with its heavy rainfall over Hispaniola. By Tuesday, these hazards will threaten Jamaica and far southern Cuba. 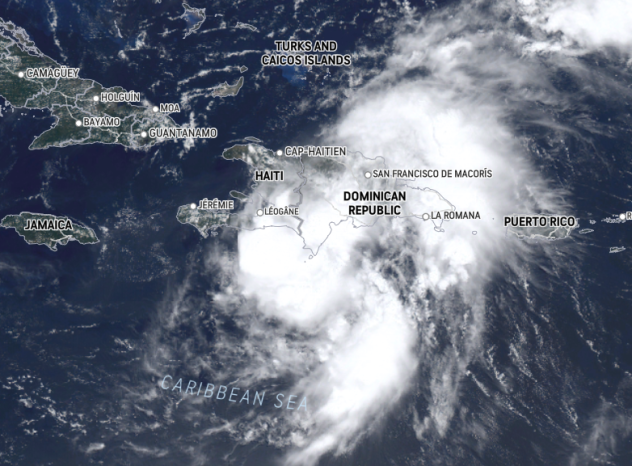 As of 11 a.m. EDT Tuesday, the National Hurricane Center (NHC) stated that the center of Grace was 75 miles to the east of Montego Bay, Jamaica, with the storm's movement at 15 mph to the west. The NHC reported "extremely heavy rain" was causing flooding issues across portions of Hispaniola on Monday night.

Grace is forecast to continue its westward movement on Tuesday and is set to weave between Jamaica and southern Cuba.

"Wind shear and land interaction will make for only gradual strengthening over the next day or two. As Grace moves closer to the Yucatan, more open water and lessening wind shear may then allow for more strengthening and Grace could reach hurricane strength before reaching the Yucatan early Thursday.” AccuWeather Meteorologist Jake Sojda said. 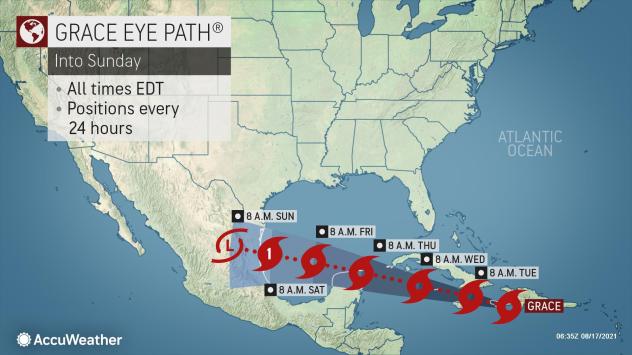 Land interaction in the northern Caribbean also caused Fred to wobble in intensity. The biggest difference between the two storms has been Grace's path farther to the south. While Fred skirted the northern coast of Cuba, Grace is projected to skirt the country's southern coast.

Regardless of Grace's strength, AccuWeather meteorologists say that the storm can bring devastating flooding and mudslides across the northern Caribbean, particularly in earthquake-ravaged areas of Haiti and surrounding mountainous terrain.

On Monday night, Haiti's civil protection agency, Protection Civile, said on Twitter that the ongoing heavy rainfall over the Sud department had complicated the "situation of displaced people."

Some residents displaced from their homes by Saturday's quake were forced to set up makeshift tents for shelter. It was in these same tents that these residents took the brunt of the rain and wind from Grace on Monday night. Video from the area showed tarps weighed down by ponding water and wind-whipped rain reaching people huddled under a shelters comprised of blankets and poles.

"Heavy rain and gusty winds can lead to flooding as well as downed trees and power lines across the northern Caribbean, but with the center of Grace largely remaining over water, wind damage should remain relatively minor," AccuWeather Senior Meteorologist Adam Douty said.

Widespread rainfall amounts of over 2 inches (50 mm) are anticipated across the region, with a corridor of heavier rain from the southern tier of Hispaniola to Jamaica, where 4-8 inches (100-200 mm) of rain are possible. This is also the most likely location for the AccuWeather Local StormMax™ of 12 inches (300 mm). 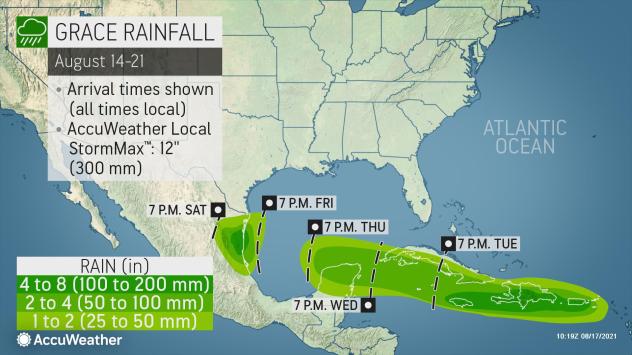 Southern Haiti is included in the area at risk for more than 4 inches (100 mm) of rainfall, inhibiting earthquake cleanup and rescue efforts.

As of early Tuesday morning, widespread rainfall amounts of 3 to 5 inches (75-125 mm) had already fallen across southern areas of Haiti.

Tropical downpours and gusty winds will spread over Jamaica and the southern tier of Cuba on Tuesday.

Grace is rated as a 1 on the AccuWeather RealImpact™ Scale for Hurricanes in the Caribbean due to the heavy rain and the risk of flooding that is likely to be the storm's most widespread impact on the islands. 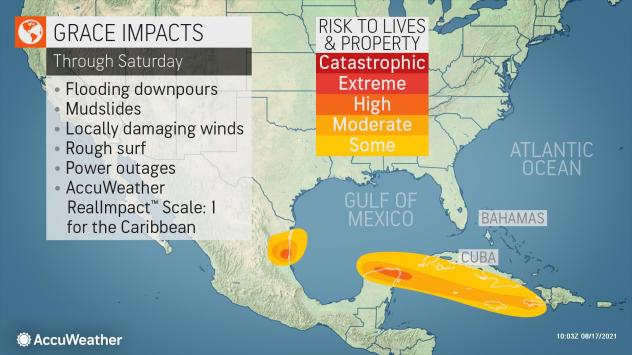 Wind gusts of 40-60 mph (60-100 km/h) are possible across the region, which can snap tree branches, down power lines and turn loose outdoor items into potentially deadly projectiles.

Any infrastructure already weakened by Fred's passing last week will be more susceptible to damage at lesser wind speeds. 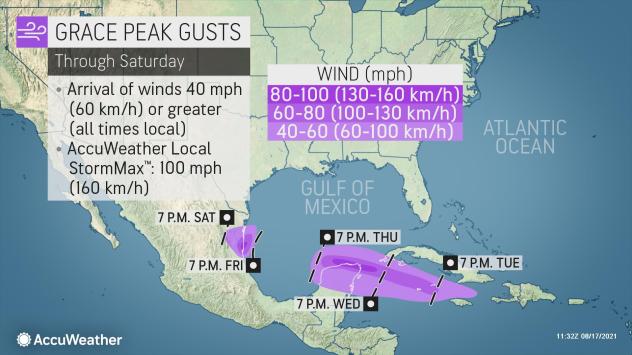 Later this week, Grace is expected to emerge in the western Caribbean Sea and threaten Mexico's Yucatan Peninsula.

"Locally heavy rain and strong winds may move across northern portions of the Yucatan Peninsula Wednesday night through Thursday. If the center crosses land, some wind damage is possible," Douty said.

Beyond the Yucatan Peninsula, it is possible that Grace's circulation remains intact enough for the storm to survive across the southern Gulf of Mexico and perhaps strengthen further. Waters in this region are sufficiently warm to promote the strengthening of a tropical system. 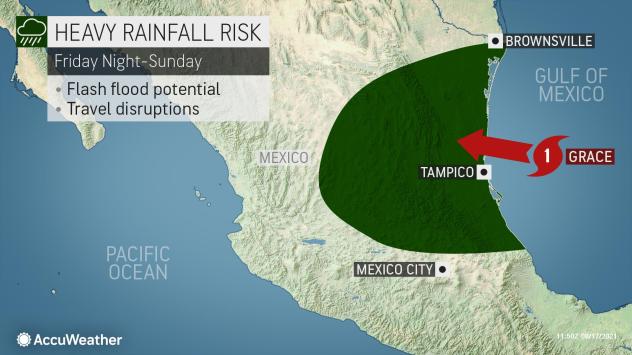 All interests from southern Texas to the eastern coast of Mexico should be prepared for possible impacts from Grace in the form of heavy rainfall and gusty winds late this week and into the weekend. Rain and wind would be even more severe should the storm reach hurricane strength.

Grace already has a history of packing a punch. Over the weekend, the storm brought periods of heavy rain from St. Lucia to the Virgin Islands, and wind gusts on islands like St. Croix and Grenada surpassed 35 mph. Rain and gusty winds swept through Puerto Rico on Sunday.

Prior to Grace's impact on the country, Puerto Rican Gov. Pedro Pierluisi announced in a press conference last week said that the island's National Guard was standing by to assist residents during the storm, in addition to establishing storm shelters. Pierluisi also postponed the start of public school classes until this Wednesday.

Severe Weather Texas State Capitol floods amid round of storms

Hurricane Fred to threaten flooding, tornadoes throughout much of East