Tropical storm warnings were in effect Friday afternoon, from Long Island into New England, as Elsa continued its northeastward trek.

As of mid-afternoon Friday, the Elsa was located 20 miles west of Plymouth, Massachusetts and had maximum sustained winds of 50 mph. Elsa was racing northeastward at 31 mph. AccuWeather meteorologists expect the now, tropical rainstorm to deliver impacts of varying intensity to parts of the mid-Atlantic and northeastern United States late this week. Due to changes in the structure of Elsa, the system officials at the National Hurricane Center had determined that Elsa was no longer a tropical storm as of the 2 p.m. EDT advisory.

Elsa was blamed for at least one fatality in Florida well after making landfall as a 65-mph tropical storm in Taylor County, along the upper west coast of the peninsula. The storm brought wind gusts as high as 78 mph to parts of southwestern Florida Tuesday. 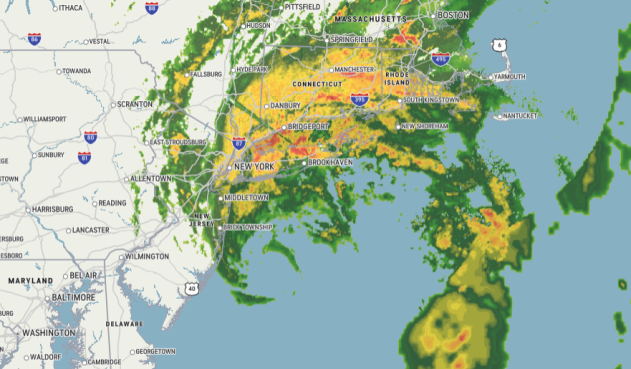 Elsa is predicted to travel along the New England coast on Friday. Another landfall in southeastern New England is forecast, and the center may brush eastern Long Island, New York, beforehand.

The change in status from a tropical storm to a tropical rainstorm, which began on Friday morning has been completed, due to an injection of cool and dry air into part of the storm's core and since the system was traveling over cool ocean waters. 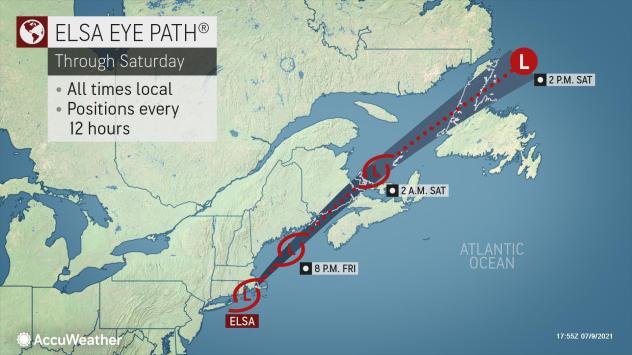 Elsa will continue to unleash a period of heavy rain, a brief period of gusty winds and the risk of severe thunderstorms in part of New England through the rest of the afternoon. These conditions will continue to bring a risk to lives and property due to flooding, power outages and wind damage, even though Elsa will be well below its peak intensity as a Category 1 hurricane, which it reached twice along its journey through the Caribbean and Gulf of Mexico.

New York City; Hartford, Connecticut; Providence, Rhode Island; and Boston are a few major cities that have been hit with several hours of heavy rain and gusty winds from Elsa's nearby track. 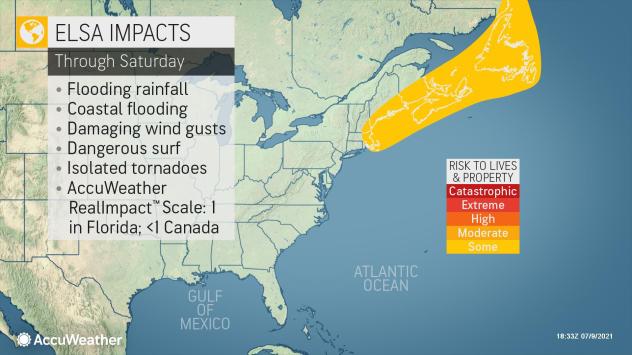 Enough rain is forecast to fall to lead to flash flooding in urban and poor drainage areas along the Interstate 95 corridor from the mid-Atlantic coast through New England. A general 1-2 inches of rain is forecast to fall with local amounts of 2-4 inches from the Atlantic coast to about 100 miles inland. An AccuWeather Local StormMax™ of 6 inches of rain is anticipated. 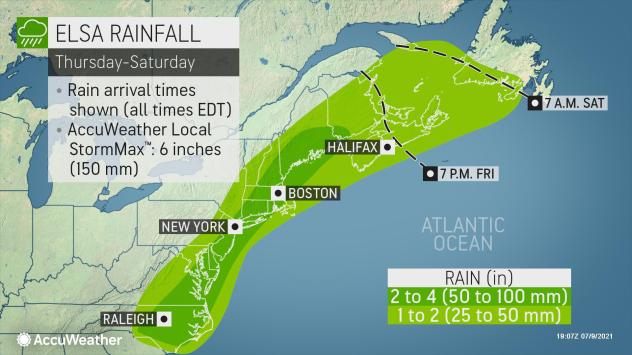 Although the rain will be heavy, it will be quick-hitting. "Elsa's accelerating forward motion is predicted to limit the duration of the rain to about six hours or less in most cases," AccuWeather Senior Meteorologist Bill Deger said.

The storm's quick movement will keep much higher rainfall amounts at bay.

However, some areas in the mid-Atlantic and especially New England have been hit with downpours associated with thunderstorms during multiple days prior to Elsa's arrival this week.

It is in these areas where flooding problems may escalate at a fast pace, despite the brief nature of the heavy rain, Deger said.

The combination of downpours from Elsa on Friday morning and non-Elsa thunderstorms Thursday evening deposited about 4 inches of rain on New York City. Even ahead of Elsa, flash flooding occurred in the Big Apple.

While the New York metro area will get a break from rain most of the afternoon, another thunderstorm downpour may roll through during the evening hours. Other locations in the mid-Atlantic can be hit with a thunderstorm downpour in the wake of Elsa during Friday evening. Just has been the case much of this week, the storms can hit some neighborhoods hard with flash flooding and strong wind gusts.

Boston picked up 5.26 inches of rain during the first week of July, which is more than eight times the normal rainfall for the seven-day period. The soil is saturated in a number of locations, so even a three- to six-hour period of heavy rain can lead to rapid runoff and flooding in urban areas and along small streams.

Even though maximum sustained winds with Elsa are around 50 mph, higher gusts will continue with the storm to 60 mph in coastal areas as far north as Maine. An AccuWeather Local StormMax™ of 70 mph is most likely along mid-Atlantic capes and barrier islands, but especially so in southeastern Massachusetts, including Martha's Vineyard and Nantucket, as well as eastern Long Island, New York. 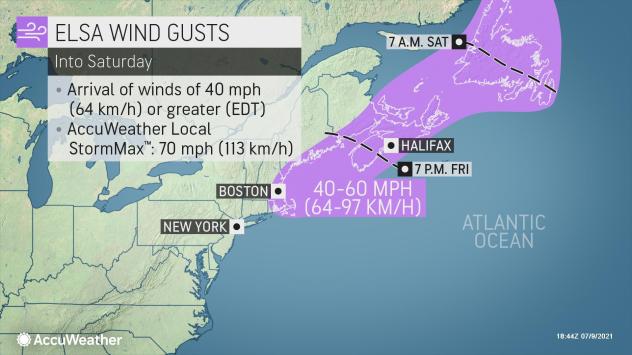 Winds this strong alone can lead to sporadic power outages and minor property damage. Trash cans and recycling bins can be sent flying through neighborhoods. The saturated state of the soil in some communities can lead to more trees being pushed over, which can trigger more power outages than would typically occur with a storm of similar intensity.

Few problems associated with wind are likely north and west of Interstate 95 in the mid-Atlantic region and in northwestern New England because the storm will hug the coast. 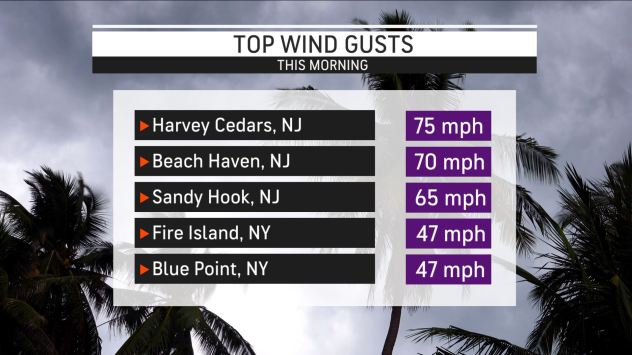 Farther south and east, the risk for severe weather will linger for some areas near and southeast of Elsa's track. Coastal areas from Virginia to New Jersey and southeastern New England may face some heightened risk of severe thunderstorms and isolated tornadoes and waterspouts as a result.

There were two reports of tornadoes in southeastern Virginia with minor damage during Thursday night. From Thursday night to early Friday morning, there were several radar-indicated potential tornadoes in the area from in the Chesapeake Bay and Delaware Bay regions that prompted warnings by the National Weather Service.

A storm surge of 1-3 feet is forecast along the coast of eastern New England and Nova Scotia, Canada, into Friday night. 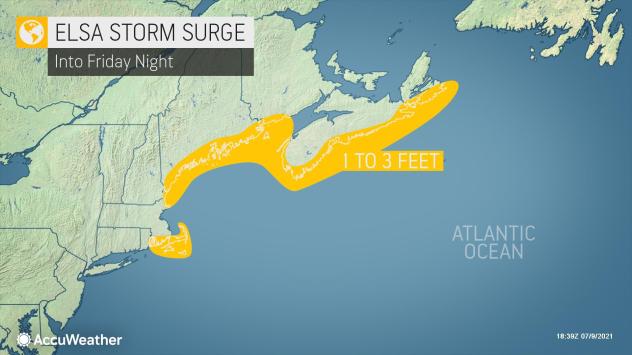 At this level, when combined with the proximity to the new moon on Friday, when tides are astronomically a bit higher when compared to the rest of the month, minor coastal flooding is likely.

In addition to the concern for coastal flooding, "rough surf and rip currents are expected from the mid-Atlantic to New England shores as Elsa progresses into the northern Atlantic into the end of the week," AccuWeather Meteorologist Adam Sadvary said.

In the wake of Elsa and following a non-tropical storm that will press through the Northeast late this week and into the weekend, a cooler and somewhat less humid batch of air will move into the region, offering residents a break from hot and humid conditions. 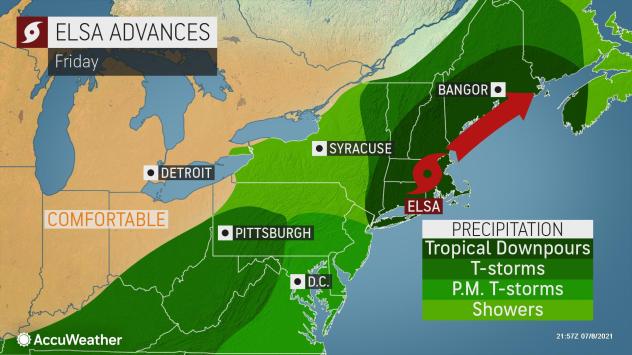 After Elsa departs the northeastern U.S. by Friday night, the storm is expected to produce some impacts in Canada into the weekend, AccuWeather forecasters say.

Elsa is forecast to bring 1-2 inches (25-50 millimeters) of rain and 40- to 60-mph (64- to 97-km/h) wind gusts to Nova Scotia, Newfoundland and Prince Edward Island in Atlantic Canada late Friday and into Saturday. Beyond that, the storm is forecast to dissipate gradually as it spins over the Labrador Sea.