Sen. Rick Scott said the “dangerous” fires have distracted from “first-responders’ mission of saving lives after the storm” in a letter to the U.S. Transportation Secretary Pete Buttigieg — as officials ask for guidance on how to handle the emerging threat.

An impending revolution in the automobile market has come across quite the snag during the aftermath of Hurricane Ian.

In Florida, electric vehicles have become an increasingly popular pick for residents, with over 95,000 registered in the state at the end of 2021. However, in the wake of the Category 4 hurricane that hit the state last month, these vehicles have been more akin to a time bomb.

Saltwater flooding in the state’s coastal areas caused the lithium ion batteries in electric vehicles to combust, catching fire. Firefighters near Naples had to put out six blazes related to the vehicles in the days following Ian's landfall.

Eric Wachsman, director of Maryland’s Energy Institute, stated that the qualities of lithium ion battery cells that allow them to move a passenger vehicle also make these cells vulnerable to ignition, due to the cells having closely placed electrodes that are filled with a flammable liquid electrolyte.

“This flammable liquid could get into what’s called a thermal runaway situation where it just starts sort of boiling, and that results in a fire,” he told CNBC in January. 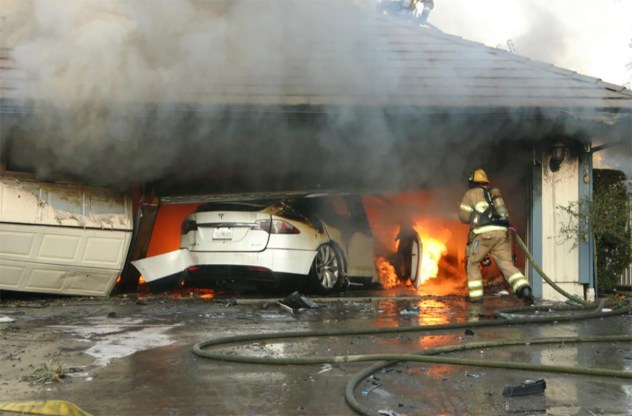 This undated photo provided by National Transportation Safety Board, The Orange County Fire Authority battles a fire on a burning vehicle inside a garage in Orange County, Calif. When firefighters removed the SUV from the garage to assess the fire, they identified the fuel source as the SUV’s high-voltage battery pack. U.S. safety investigators say electric vehicle fires pose risks to first responders, and manufacturers have inadequate guidelines to keep them safe. (Orange County Sheriff’s Department/National Transportation Safety Board via AP)

“In my experience, Southwest Florida has a significant number of (electric vehicles) in use, and if those (vehicles) were left behind, exposed to storm surge, and sitting in garages, there is a risk of fires,” Patronis wrote.

Responding to Patronis, Danielson wrote that firefighters and other first responders “not involved in immediate lifesaving missions” should identify flooded electric vehicles with lithium-ion batteries and move them “at least 50 feet” away from other structures, vehicles and combustibles, in order to eliminate any possible collateral damage from electric vehicle combustion.

“Test results specific to saltwater submersion show that salt bridges can form within the battery back and provide a path for short circuit and self-heating,” Danielson wrote. “This can lead to fire ignition. As with other forms of battery degradation, the time period for this transition from self-heating to fire ignition can vary greatly.” 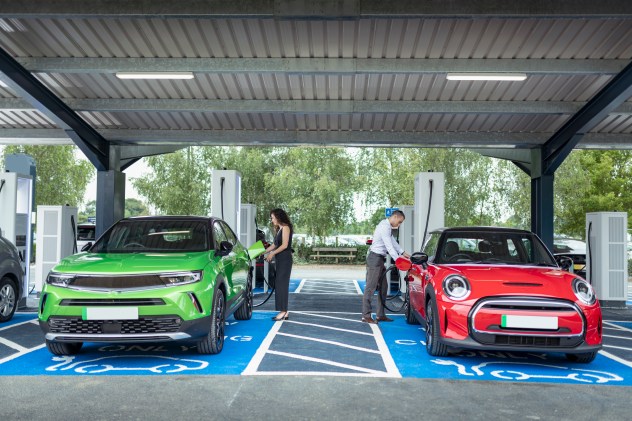 Electric vehicles have become a nuisance for Florida first responders, having to put out flames from vehicles that became submerged in saltwater after Hurricane Ian. (Photo via Getty Images)

Sutcliffe noted that electric vehicle batteries can also re-ignite hours, or perhaps days, after the fire is initially controlled.

“A lot of the time, firefighters and fire agencies are just expected to kind of figure it out,” Sutcliffe told CNBC.

Patronis echoed this sentiment, stating that much of the guidance he has received on the topic of submerged vehicles “does not address specific risks associated with exposure of (electric vehicles) to salt water.”

“[I] saw with my own eyes an [electric vehicle] continuously reignite, as fire teams doused the vehicle with tens of thousands of gallons of water,” Patronis said.

Sen. Rick Scott, R-Fla., addressed a letter to U.S. Transportation Secretary Pete Buttigieg, D, about the topic, highlighting the harm that can be done by electric vehicle ignition, including the loss of some homes in the aftermath of Ian.

“This emerging threat has forced local fire departments to divert resources away from hurricane recovery to control and contain these dangerous fires," Scott wrote to Buttigieg, claiming that these fires can take more than six hours to burn out, and adding, "Alarmingly, even after the car fires have been extinguished, they can reignite in an instant." 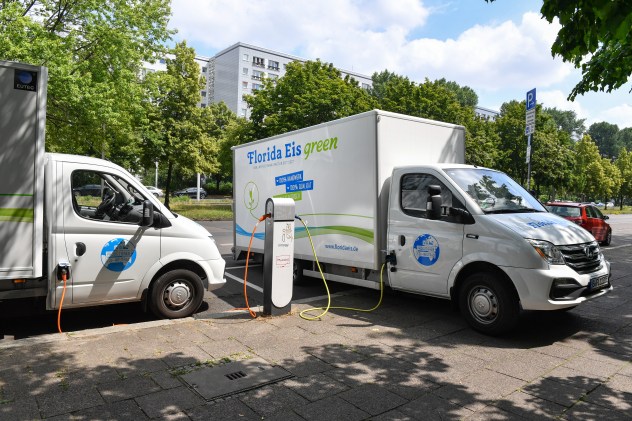 Two delivery vehicles of the Florida Eis Manufaktur are standing up at a press event on CO2-free delivery traffic for e-delivery vehicles and e-trucks to small e-charging stations. Electric vehicles have come under question in the state after a string of fires. (Photo by Jens Kalaene/picture alliance via Getty Images)

Supporters of the electric vehicle industry have pushed back on the words of Scott, including Joe Britton, executive director of the Zero Emission Transportation Association. Britton said that Scott's statements about the safety of electric vehicles were "misleading."

Vilas Pol, a professor of chemical engineering at Purdue University, said that lead-acid batteries found in both electric and gas vehicles can also catch fire via saltwater submersion, much like lithium-ion batteries. However, Pol also noted that the risk of those fires reigniting is smaller than fires from lithium-ion batteries.