Residents in Cancun, Mexico, board up a building on Oct. 6, in preparation of Hurricane Delta's landfall.

AccuWeather meteorologists have put the Gulf Coast of the United States on high alert for what could be a disastrous strike later this week by a very dangerous hurricane. Overnight and through early Tuesday morning, Hurricane Delta escalated quickly into a Category 4 storm and forecasters warn it could strengthen even more before it strikes the Yucatan Peninsula. After that, forecasters expect Delta to emerge over the extremely warm waters of the Gulf of Mexico, where it could maintain its strength for a time.

The hurricane’s winds had increased to 130 mph by 11:20 a.m. EDT Tuesday just over 24 hours after it became the 25th tropical storm of the 2020 Atlantic hurricane season. Delta became the first major hurricane to churn over the Atlantic basin during the month of October since Hurricane Michael in 2018. Delta's intensification was the most extreme in 15 years for an October hurricane. The storm's maximum sustained winds increased by a whopping 70 mph — from 40 mph to 110 mph — in its first 24 hours as a named storm. Only Hurricane Wilma in 2005 exploded in a more significant fashion over that same 24-hour period. Delta has also set a speed record for strengthening from a depression to a Category 4 hurricane. Delta accomplished this in just over 36 hours, and surpassed Keith from 2000, which did so in 42 hours.

Delta lost wind intensity overnight as it tracked closer to land. It eventually made landfall in Mexico around 5:30 a.m. Wednesday near the town of Puerto Morelos. At the time of landfall, Delta was a strong Category 2 storm with maximum sustained winds of 110 mph, just 1 mph below major hurricane strength.

Satellite images showed that Delta was an incredibly compact hurricane on Tuesday. Hurricane-force winds extended outward only up to 30 miles from the storm’s center, but a small eye about 5 miles across had developed, a sign that forecasters said indicated rapid strengthening. 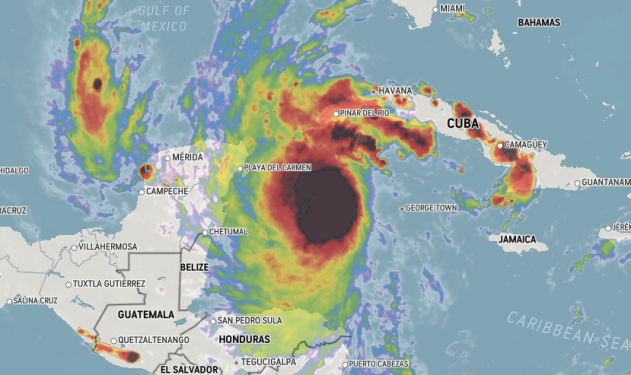 This image, captured late in the afternoon on Tuesday, Oct. 6, 2020, shows Hurricane Delta over the northwestern Gulf of Mexico. (AccuWeather)

U.S. officials were already urging Gulf Coast residents to be prepared ahead of the intense hurricane. Louisiana Gov. John Bel Edwards said early Tuesday that Louisianans should have a game plan now as Delta is the fourth storm of the season to threaten Louisiana. Later in the day, Gov. Edwards declared a state of emergency in Louisiana. Delta is expected to make landfall as a major hurricane of at least Category 3 strength over south-central or southeastern part of the state late Friday or early Saturday, becoming the first-ever hurricane named after a Greek letter to strike the U.S., and the 10th storm of the season to make landfall in the continental U.S. — a new record.

"Now is the time for Louisianans to prepare [for] Hurricane #Delta. This storm will affect Louisiana and everyone needs to prepare accordingly,” Edwards tweeted Tuesday morning.

Alabama Gov. Kay Ivey declared a state of emergency midday Tuesday ahead of the hurricane, noting that coastal areas of the state are still recovering from Sally's blow in mid-September. Hurricane Delta "could potentially have a significant impact" on Alabama, she tweeted.

It's possible that Delta could peak as a Category 5 hurricane with sustained winds exceeding 155 mph. If the storm were to reach that strength, it would be the first hurricane this season to reach Category 5 force. Hurricanes Laura and Teddy peaked at Category 4 intensity.

Delta is forecast to take a fairly steady west-northwest path into Thursday, which will take the storm over part of Mexico's Yucatan Peninsula on Wednesday with dangerous, damaging and perhaps deadly consequences. 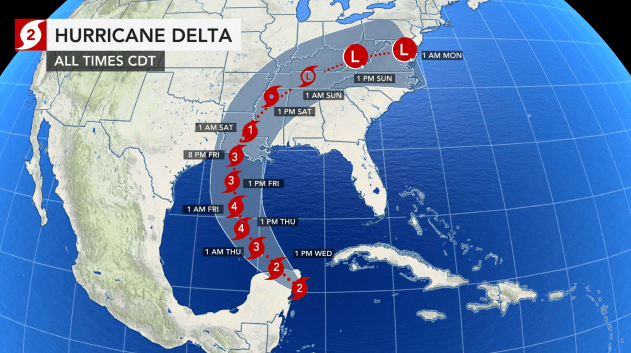 From Thursday to Friday, the hurricane is projected to begin a curved path to the north over the west-central Gulf. As the storm approaches the Louisiana coast late Friday it may begin to turn more to the northeast.

"As Delta approaches the central Gulf Coast it will start to encounter increasing wind shear and slightly cooler water, but the forward speed of Delta and the degree of shear it encounters will determine its wind strength at landfall," AccuWeather's top hurricane expert Dan Kottlowski explained. 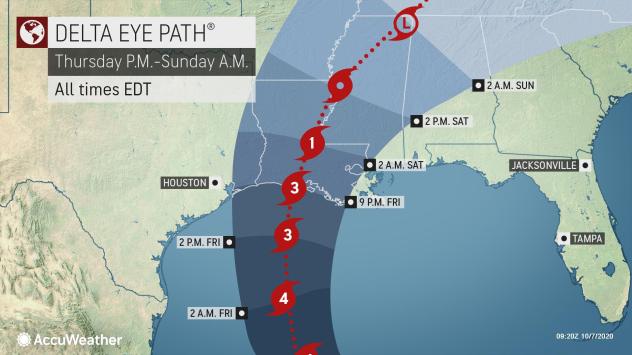 Wind shear is the increase in wind speed with altitude as well as the sudden change in wind direction from one location to another. Wind shear and changes in the structure of the eye are some of the main challenges in forecasting the overall strength of hurricanes.

Interests along the Louisiana coast should prepare for a direct strike by a major hurricane late Friday or early Saturday, and conditions are expected to deteriorate from Thursday afternoon to Friday afternoon even well ahead of landfall.

"Now that Delta has reached major hurricane strength the wind field developing around it will remain very strong. Regardless of a loss in wind intensity near the core, surge and wind impacts will still be potentially devastating along and near where the hurricane makes landfall along the central Gulf coast from late Friday to early Saturday," Kottlowski said. 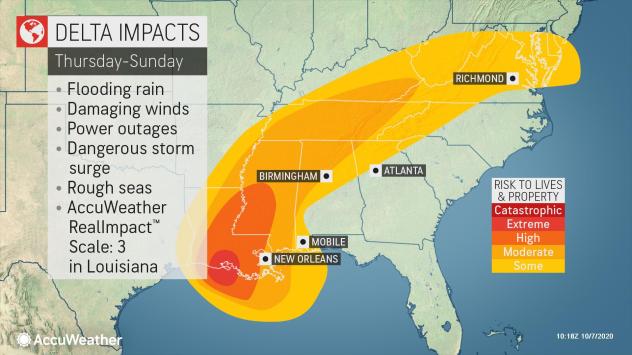 Delta is forecast to be a 3 on the AccuWeather RealImpact™ Scale for Hurricanes in the U.S. based on the anticipated flooding rainfall, damaging winds, dangerous storm surge and a number of other economic factors. This scale, developed by AccuWeather, provides a more comprehensive outlook for impacts from tropical storms and hurricanes on land areas than the Saffir-Simpson Hurricane Wind Scale, which is based solely on wind speed.

During Wednesday, Thursday and Friday, winds and seas will build over the Gulf of Mexico, especially in the central part of the Gulf. However, dangerous surf conditions are likely to develop throughout the Gulf of Mexico at midweek and remain dangerous with frequent and strong rip currents from Florida to Louisiana and Texas into the start of the weekend.

Even though the eye containing Delta's strongest winds may avoid the greatest concentration of petroleum rigs in the western Gulf of Mexico, operations of these rigs may be suspended for a few days. The projected path of Delta and its high winds could impact oil refining operations in portions of southern Louisiana.

Wave action well ahead of the storm will begin to cause overwash and coastal flooding prior to Friday from part of eastern Texas to Florida. Near and just east of where the storm makes landfall, most likely in south-central Louisiana, a major and potentially life-threatening storm surge can occur. Any shift in the storm track could cause the area of greatest storm surge to shift correspondingly.

"It is possible the storm surge could be greater from Delta than from Laura, which was estimated to be 17.5 feet," Kottlowski added.

As is often the case with hurricanes forecast to make landfall, exact track and strength will determine the severity of impact in the region.

Given Delta's current forecast track and strength, AccuWeather StormMax™ winds of 140 mph are forecast for part of southern Louisiana on Friday. But, this could trend higher depending on how much the storm strengthens over the central Gulf. 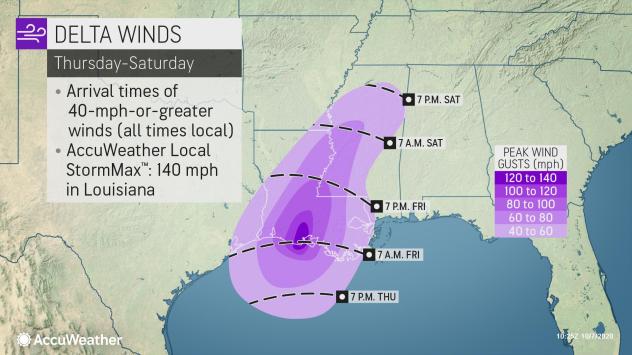 A faster forward motion may prevent Delta from quickly weakening prior to or upon landfall. The risk of damaging winds can extend well inland and not only result in a significant amount of power outages, but also property damage. Trees may block streets and secondary roads. The power could be out for many days in some of the hardest-hit communities.

Delta's fast pace should prevent a repeat of staggering rainfall amounts and flooding from Harvey in 2017 or a lesser extent from Marco, Sally and Beta this year.

A general 4-8 inches of rain is predicted near where Delta makes landfall in the U.S. with an AccuWeather Local StormMax™ of 12 inches. But, should Delta strike as a strong Category 3 or even Category 4 storm, which is possible, rainfall could be more intense along a portion of the Interstate 10 and 20 corridors. 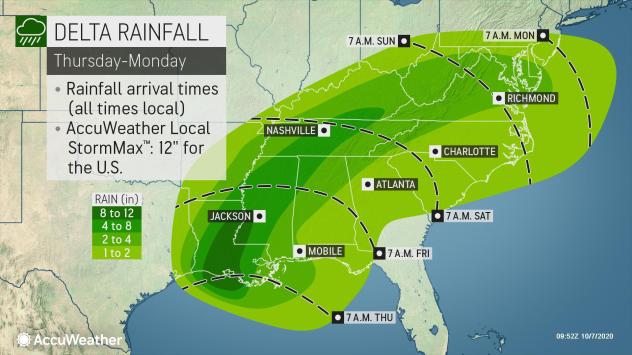 Rainfall will tend to diminish as Delta picks up even more forward motion while taking a curved path to the northeast over the interior southeastern U.S. this weekend. Despite the increasing forward speed, river and bayou flooding are expected in part of the Deep South and there can still be localized urban and small stream flooding hundreds of miles inland as well as significant rises on the rivers in the storm's path.

"Since 1964, there have only been three hurricanes to make landfall along the Louisiana coast during October," according to AccuWeather Senior Meteorologist and Forecasting Manager Dan DePodwin.

There are two major hurricanes that have made landfall along the Louisiana coast in October prior to 1964.

Take steps to prepare yourself and your family for a hurricane
Widower shares remarkable story of recovering a photo lost in Sally's wind
Hurricane Laura's 17.2-foot storm surge took everything from Louisiana resident
2020 Atlantic hurricane season already 2nd most active in history

If Delta makes landfall in Louisiana, it would be the fourth storm to do so this season. Cristobal was the first of the season, crashing into southeastern parts of the state as a tropical storm in June, followed by Category 4 Hurricane Laura and Tropical Storm Marco, which both hit in August. Sally originally threatened to strike Louisiana, but made a northward turn which spared the state the worst. 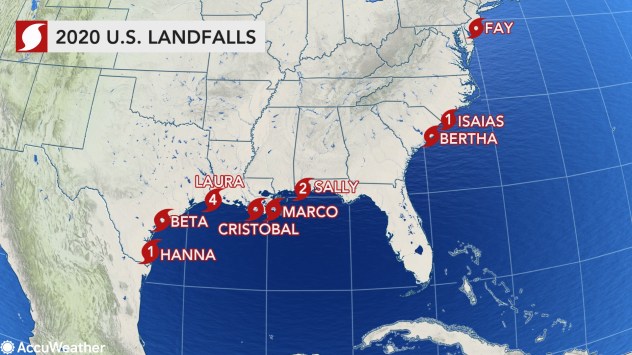