Tropical Storm Odette forms off the East Coast. Get the latest updates.

The radar and the reporter: The legendary broadcast that changed hurricane coverage 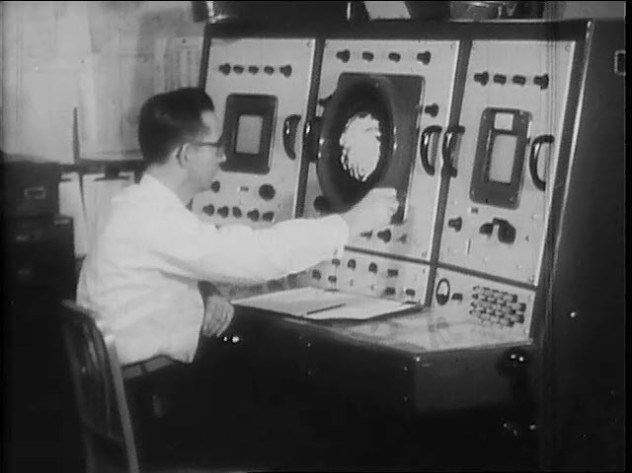 For 60 years now, Hurricane Carla has been the benchmark for landfalling hurricanes in Texas -- even the devastating Hurricane Harvey in 2017 failed to match Carla's intensity. However, as Carla grew over the Gulf of Mexico back in September 1961 and strengthened into a major hurricane, people were slow to evacuate.

Hurricane Carla, which formed during the 1961 Atlantic hurricane season, was the first tropical cyclone that forecasters could track all the way to the coast using weather radar. But, TV stations back then didn't yet have the technology currently available today to show the full path or strength of a storm. So while the United States Weather Bureau, the precursor to the National Weather Service, issued evacuation orders, many residents didn't have a sense of just how devastating the storm would be, so they remained in the path of the charging storm.

That is until a young reporter by the name of Dan Rather had an idea. Long before he took over the anchor chair at CBS Evening News, Rather was the news director at a small TV station in Houston, KHOU Channel 11. In a 2012 interview with Mediabistro, Rather said that the position "basically meant I was the director of myself because we had no other full-time employees." 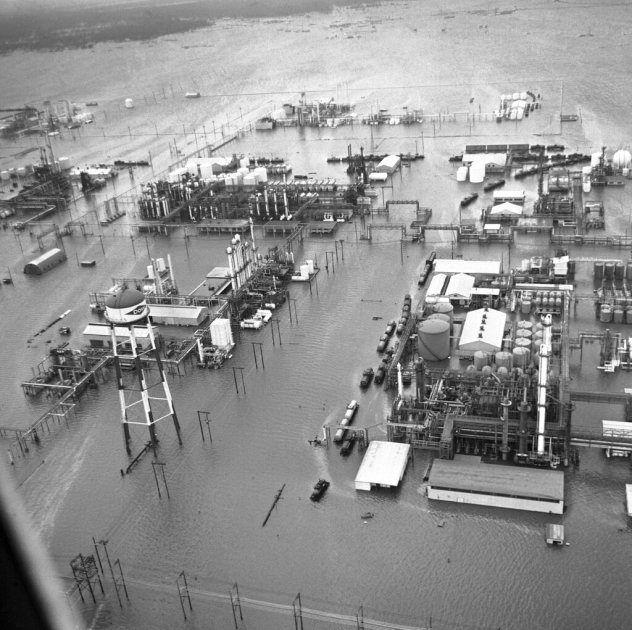 An aerial view of a portion of Dow Chemical Company's huge chemical plant at Freeport, Texas, on Sept. 12, 1961. High tides, heavy rains and a break in the river levee inundated much of the city as Hurricane Carla hit the Texas coast. (AP Photo/Ferd Kaufman)

During September of 1961, his interest in hurricanes turned his attention to a new cyclone, Carla, as it scraped by the Yucatan Peninsula and moved over the Gulf of Mexico.

"It wasn't a big story at the time, but I called on my experience and my interest in hurricanes," Rather said. "I hadn't been following closely, but when it got back into the Gulf of Mexico and began to reform, I started paying a lot of attention to it."

Born in Wharton, a town near the Texas coast that Rather referred to as "hurricane country," he had grown up with the "history, the mystery and the lore of hurricanes."

Rather recalled his grandmother once telling him, "Dan, being in the middle of a hurricane is about as close as you will get to God." 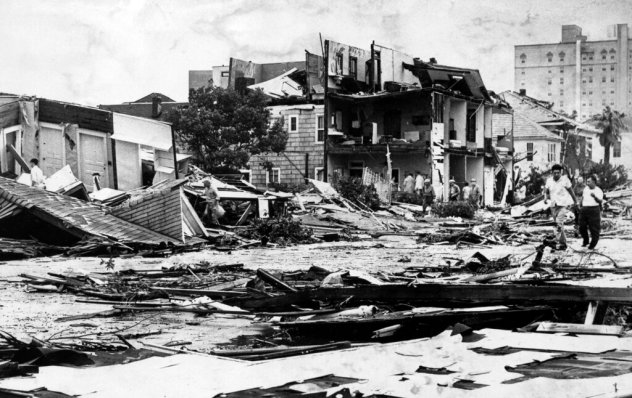 Dazed residents of Galveston, Texas, wander through debris-laden streets and amid wind-ripped homes, after enduring a double blow by Hurricane Carla and its attendant tornado, Sept. 12, 1961. (AP Photo)

When Carla entered the Gulf, it exploded in strength, becoming a major hurricane as a Category 3 storm and later on gaining Category 4 status.

Believing the hurricane could be on a path toward Galveston, Rather went to the station's program director. He stressed that, if he was correct about the trajectory, the hurricane could be big news, and the U.S. Weather Bureau had a new, state-of-the-art WSR-57 radar console. However, radar was not yet widely used in television weather predictions, nor were fledgling weather satellite images; 1961 was the first year hurricanes were spotted on the TIROS-III satellite.

"I might as well have been speaking Swahili or High Norse," Rather said, though the program director gave him permission to take a cameraman to the island office. There, he asked a meteorologist to draw a scale map of Texas on a transparent sheet of plastic, because the radar screen had no geographic boundaries.

"On the radar, you do get a sense of how big and dangerous it is, but you don't get a sense of proportion with the Texas landmass for which it's headed," Rather said. He took the transparent sheet with the Texas coast and placed it over the radar display of Carla. After convincing the Weather Bureau that the images wouldn't cause a panic, Rather produced the first broadcast of live radar images showing a hurricane.

And like that, Rather had "literally changed the way the world sees hurricanes," one KHOU Channel 11 reporter would write decades later.

"As soon as we showed the picture to our studio in Houston, the program director Cal Jones and the whole studio group back at Houston said a collective, 'Wow.'"

The evacuation of half a million people ahead of the hurricane was determined to be the largest evacuation in U.S. history at the time, according to a report by the National Weather Service (NWS).

"Most assuredly, this (the evacuation) impacted the number of fatalities associated with this dangerous hurricane with 46 people killed and 465 people injured," the report said. In comparison, the storm surge from Hurricane Audrey back during June of 1957 killed 416 people across Louisiana and Texas. 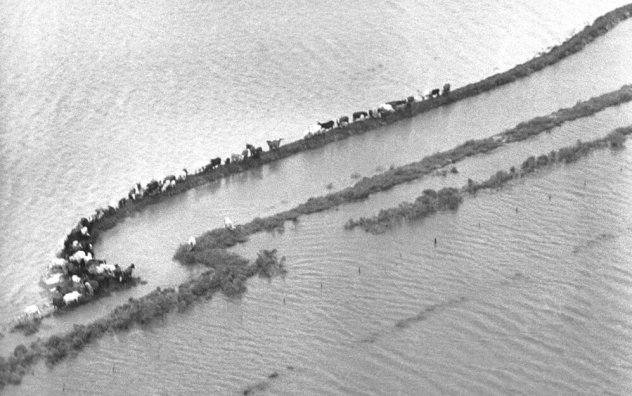 However, a reanalysis of aircraft and radar reports of the storm's peak intensity on Sept. 11 found its maximum sustained winds had reached only 144 mph (125 knots) -- a Category 4 hurricane. Along with being the first hurricane that forecasters could track via radar, Carla was also the first tropical cyclone to have its entire life history recorded by research flights, according to NOAA.

"Since the flights into Carla 60 years ago, our NOAA Hurricane Hunter missions continue to help forecasters and researchers learn more about the formation and structure of these storms," NOAA Aircraft Operations Center Public Affairs Officer Jonathan Shannon told AccuWeather. "While the technology we have used has advanced, our main purpose remains the same - to ensure people and property in the path of these storms are as prepared and protected as possible."

"It looked like a war zone” after the hurricane passed through, resident Joe Pena explained to the NWS. At 19 years old, he decided to stay behind as Carla approached in order to help the county sheriff and work as a dispatcher.

He recalled that the sheriff told him and his coworkers, "As soon as the hurricane hits, no one is leaving the building. People start calling, and they’re on their own.”

While out driving with a deputy after the storm, they encountered a car headed out of Port O’Connor, Texas. The man told them that he was leaving. "I'm the last one to leave Port O’Connor,” Pena recalled him saying, and he added, "The reason I’m leaving is because Port O’Connor is underwater."

Norman Marshall, a Port Lavaca, Texas, resident and business owner, told the NWS that he stayed behind when Carla struck because his mom and grandmother didn’t want to evacuate. He boarded up his business, but it was destroyed when it took on 4 feet of water, leaving a mess behind. He recalled that a Coast Guard boat that was 100 feet or 150 feet long ended up across the road.

South of his town, in one of the hardest-hit areas, Carla left behind complete destruction, wiping away concrete foundations along with the structures that had once stood atop of them. Besides a Catholic church and few other isolated structures that were left standing, "most everything else was wiped off the map,” Marshall recalled.

Watch the complete Mediabistro interview with Rather below.