As floodwaters spilled into Lake Conjola, New South Wales, on Feb. 10, a kangaroo was spotted attempting to escape the high waters. Heavy rain has soaked the region over the last few days with some receiving more than 9 inches of rainfall.

A tropical system will make its way through the Tasman Sea, bringing tropical impacts to New Zealand by the weekend.

Once Tropical Cyclone Uesi, which is now classified by the Australia Bureau of Meteorology as extratropical, will pass dangerously close to the coastline of eastern Australia as the region continues to deal with ongoing flooding.

After battering parts of New Caledonia with more than 250 mm (10 inches) of rainfall earlier this week, Uesi will now track southeastward toward New Zealand.

On its path, Lord Howe Island is at risk for a direct hit from Uesi through Friday.

The island may endure a prolonged period of heavy rainfall and winds in excess of 80 km/h (50 mph) into Friday afternoon. 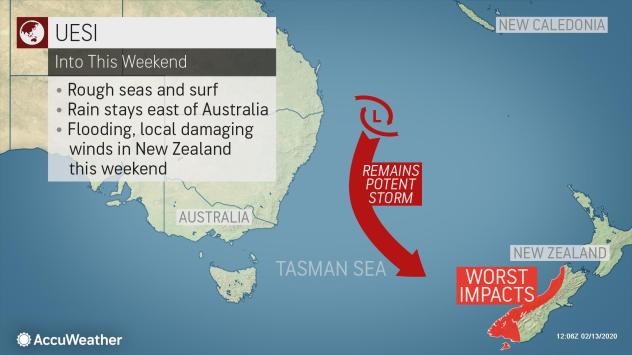 After passing Lord Howe Island, the storm will approach the southern portion of New Zealand.

New Zealand will not be as fortunate as a southeast turn later this week will take Uesi on a direct track toward South Island.

The North Island is expected to avoid any noticeable impacts from this storm as it makes a possible direct hit on the southwest coast of the South Island on Sunday.

Ahead of the storm's arrival, rain will begin to dampen southern and western parts of the South Island on Saturday night.

Rain will become heavy and may lead to flooding and travel problems on Sunday and Sunday night as the storm lashes the island's western and southern coastline.

Locations from Westport southward to Fiordland National Park and Invercargill will be at risk for flooding downpours and locally damaging winds gusts.

Southern and western areas of New Zealand are no stranger to flooding as multiple storms have brought heavy rain to the region in recent months and caused travel shutdowns and impacted tourism.

The heaviest rain will come to an end by Monday morning with some lingering rainfall possible during the first half of the week.