Bernie Rayno breaks down the different scenarios for where Cristobal could make landfall in the U.S.

Tropical Storm Cristobal unloaded flooding rainfall and made landfall in southern Mexico on Wednesday, and AccuWeather meteorologists are busy looking ahead to where the storm may go after meandering across southern Mexico. The system, now a tropical depression, is expected to take a northward turn, and it could gain strength over the Gulf of Mexico prior to reaching the southern United States coastline. 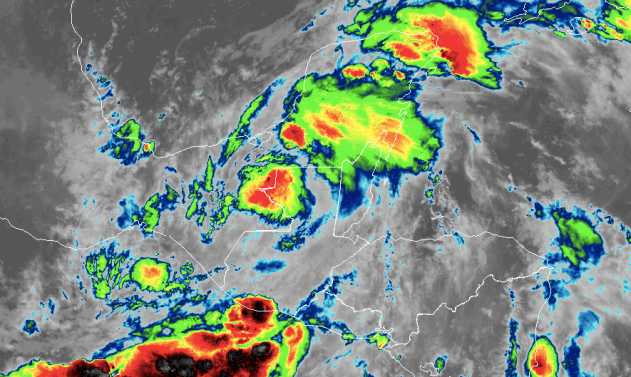 Tropical Storm Cristobal made landfall along the coast of Mexico Wednesday morning and had weakened to a tropical depression over southeastern Mexico as of Thursday morning, June 4, 2020. (NOAA / GOES-East)

Cristobal has already set records in the Atlantic basin. It became the earliest-ever third named tropical storm to form in any Atlantic hurricane season in recorded history on Tuesday. The previous storm to hold that record was Tropical Storm Colin, and it developed during the midday hours of June 5 in 2016. Typically, the third named storm does not brew until much later in the season, occurring on average around Aug. 13. Last year, the third storm of the season, Tropical Storm Chantal, developed months later on Aug. 20.

The disturbance first developed as a depression over the Bay of Campeche in the southwestern Gulf of Mexico on Monday, June 1, the first official day of hurricane season. AccuWeather forecasters began monitoring the potential for this system last week.

The National Hurricane Center (NHC) confirmed that Cristobal made landfall in the state of Campeche near Atasta, Mexico, and just to the west of Ciudad del Carmen at 8:35 a.m. CDT Wednesday. The storm's maximum sustained winds were 60 mph with higher gusts occurring.

Cristobal is forecast to complete a loop over land in southeastern Mexico as it straddles 83-degree-Fahrenheit waters of the Bay of Campeche into Friday. AccuWeather meteorologists predict up to 30 inches of rainfall in the region. 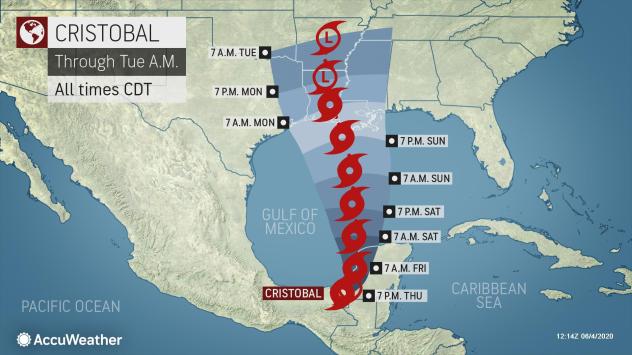 How close to the coast versus how far inland Cristobal travels over Mexico could affect whether the storm regains strength this weekend.

"There is a small chance the system will break up over southern Mexico late this week, but the more likely scenario is for the storm to survive, move back out over the warm waters of the central Gulf of Mexico, reorganize, strengthen and turn northward toward the U.S. from Friday night to Sunday night," said Dan Kottlowski, AccuWeather's top hurricane expert. Kottlowski has been predicting tropical weather for 43 years at AccuWeather.

"We've expected Cristobal to weaken to a tropical depression for a time over Mexico on Thursday," Kottlowski said.

If Cristobal moves a bit south over Mexico, it will interact with hills and mountains over the region. "This stronger land interaction would cause the lower-level part of the storm to unravel further, making it more difficult for it to recover once it starts to move back northward," Kottlowski said.

AccuWeather increases number of hurricanes predicted for ‘very active’ 2020 Atlantic season
Hurricane season begins: Prepare with AccuWeather’s #HurricaneTownHall
Cristobal makes landfall in Mexico, could dump up to 30 inches of rain before heading for US

"On the other hand, if the storm stays near the coast and near the source of moisture, it will retain its circulation and is more likely to rebound faster once turning northward at the end of the week," he explained.

Sea surface temperatures are generally in the 80s over the southwestern Gulf of Mexico, which is warm enough to allow the system to strengthen. Wind shear -- the increase in wind speed with height in the atmosphere, or a sharp change in wind direction -- is forecast to be rather low as the storm emerges over open water and begins its northward trek. The low wind shear is another factor that favors strengthening of the system even if interaction with Mexico first weakens the storm.

"Forward motion of Cristobal will be slow initially, but the system is likely to gain forward speed later this weekend," Kottlowski said. 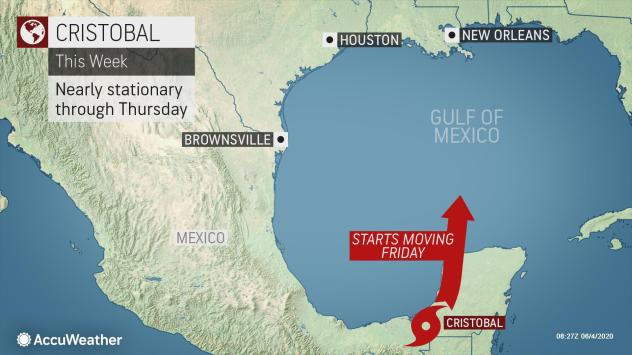 By increasing its forward speed, the storm will avoid spending much time over waters that have been cooled by the natural churning process that can take place with wave action.

"Provided Cristobal does not get beaten down too much by interaction with Mexico, there is a chance the storm strengthens to a hurricane over the central Gulf of Mexico later this weekend, prior to reaching the U.S.," Kottlowski said.

All petroleum and fishing interests over the Gulf of Mexico, as well as people living in or vacationing in coastal areas from Louisiana to Texas to Florida are urged to closely monitor the progress of the storm. At this point, the northward motion of the system is forecast to commence late Thursday.

The current window of where predicted landfall is most likely extends from the upper Texas coast to the Mississippi Panhandle, putting central Louisiana in the middle of that zone late in the weekend or early next week. 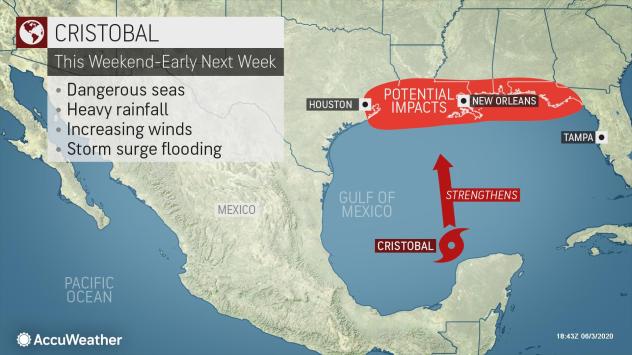 Because surrounding atmospheric conditions are rarely constant and can have a profound effect on tropical systems, coastal communities along the central Texas coast as well as the Alabama and Florida panhandles should keep an eye out for potential shifts in track, once the storm begins to take a northward jog.

An area of high pressure to the north of the storm is forecast to weaken and split for a time, which will steer the storm northward. If the high strengthens prior to the storm moving inland over the upper Gulf coast, it could force the storm westward or cause it to stall early next week.

Whether or not the situation becomes serious in communities along the upper and western Gulf coast will depend on the strengthening process of the storm and where landfall occurs. How much rain falls from the storm in the southern U.S will depend on its strength and forward speed. 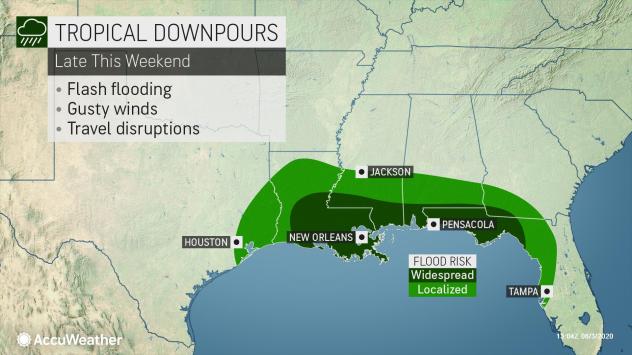 Some early characteristics of the storm have shown a skew toward a significant amount of showers and thunderstorms on the eastern flank versus the western flank.

"This unbalanced heavy rainfall pattern could continue as the storm moves farther north this weekend over the eastern half of the Gulf of Mexico and adjacent shoreline areas of the U.S.," according to AccuWeather Senior On-Air Meteorologist Mark Mancuso.

At this time, a repeat of Hurricane Harvey from August 2017 or Katrina from 2005 does not appear likely for the U.S. Harvey moved inland over Texas and lingered for days, unloading several feet of rain and extreme flooding in the Houston area.

Hurricane Katrina caused devastating flooding in New Orleans as it moved inland over Louisiana, after becoming a monster Category 5 storm in the Gulf of Mexico. Katrina weakened prior to landfall but maintained major hurricane status as a strong Category 3 storm and dealt the region a catastrophic blow 15 years ago.

Still, even a strong tropical storm or minimal hurricane that maintains forward speed as it moves inland over the South can still unload several inches to a foot of rain, which is enough to lead to urban and low-lying area flooding as well as rises on area rivers and bayous.

Should Cristobal remain a tropical storm or a minimal hurricane, the danger from flooding, waves and winds would be substantially less than if a Category 2 or 3 hurricane was moving inland.

Typically, the greatest storm surge and coastal flooding occurs near the center to several dozen miles to the east of the point of landfall. However, bays and shallow waters as well as flat land areas can contribute to a substantial increase in the storm surge effect.

As winds increase with the strengthening storm, seas over the Gulf of Mexico are expected to transition from choppy to very rough this weekend. Waves propagating outward from the approaching and strengthening storm will lead to building breakers and an increase in the strength and number of rip currents as well as beach erosion.

An uptick in rip currents can occur in some coastal areas of the U.S. as early as Friday night and Saturday.