The third named storm of the Atlantic hurricane season is already responsible for flooding into areas like Managua, Nicaragua, as seen on June 1.

Cristobal continued to dump heavy rainfall on southeastern Mexico and Central America as it regained tropical storm strength on Friday. Flooding and mudslide dangers will gradually lessen as the storm pulls away the rest of the weekend.

The government of Mexico upgraded tropical storm watches to tropical storm warnings from Punta Herrera to Rio Lagartos, Mexico, in the Yucatan Peninsula on Friday afternoon. The dangers of life-threatening flooding and mudslides persisted.

In Mexico, reports of flooding in the streets have emerged from the state of Tabasco all the way through the Yucatan Peninsula.

Both winds and torrential rain in Campeche caused structural damage and washed out roadways.

A total of 9,000 soldiers and National Guard members were put in position to help with preparations and relief work.

A highway on the Yucatan was reported to be flooded with rushing floodwaters.

"Cristobal continued to pull in moisture from the East Pacific Ocean into northern areas of Central America, drenching the region with heavy, tropical rainfall even a week after Tropical Storm Amanda made landfall," said AccuWeather Senior Meteorologist Rob Miller.

Over 26.26 inches (667 mm) of rain fell over Ocotepec, Chiapa, from May 30 to June 3, according to the national meteorological service of Mexico.

Heavy rains and flooding continue over portions of southeastern Mexico and Central America from #Cristobal. The national meteorological service of Mexico (@conagua_mx) reports that 26.26" (667 mm) of rain has fallen at Ocotepec, Chiapas, over the past 5 days (May 30-June 3). pic.twitter.com/cYm2Fk9DTk

On Thursday evening, reports came in that heavy rain caused a landslide in El Salvador and affected several homes and vehicles. At least 10 people were reported missing in Zacatecoluca, including seven from the same family.

As of Friday, officials have announced that six bodies had been located. The Minister of the Interior added that search and rescue efforts would continue but operations are complicated by the ongoing rain.

At least 72 more people were evacuated from their homes in Puerto Parada on Thursday morning after the Rio Grande burst its banks. Mauricio Zelaya, Mayor of Usuluteco, stated that all evacuees would be provided with shelter, food and medical attention.

Due to the serious flooding from Cristobal over southern Mexico and northern Central America, Cristobal has been designated as a 1 on the AccuWeather RealImpact Scale™ for Hurricanes. This rating applies to the storm's impacts on Mexico.

This weekend, Cristobal will track northward and travel through the western Gulf of Mexico and toward the United States.

As this happens, rainfall will begin to diminish across southeastern Mexico and Central America. However, rough seas may linger along Mexico's Gulf coast through the weekend.

AccuWeather increases number of hurricanes predicted for 'very active' 2020 Atlantic season
Daily coronavirus briefing: The latest on the pandemic impacting the globe
Cristobal may strengthen to a hurricane before impact the United States

Cristobal became the third named tropical system of the Atlantic hurricane season when it formed in the Bay of Campeche earlier this week and made landfall in southeastern Mexico early Wednesday as a tropical storm.

Landfall occurred around 8:30 a.m. local time Wednesday near Atasta, Mexico, just to the west of the city of Ciudad Del Carmen in the state of Campeche. At the time of landfall, maximum sustained winds of 60 mph (95 km/h) were reported. 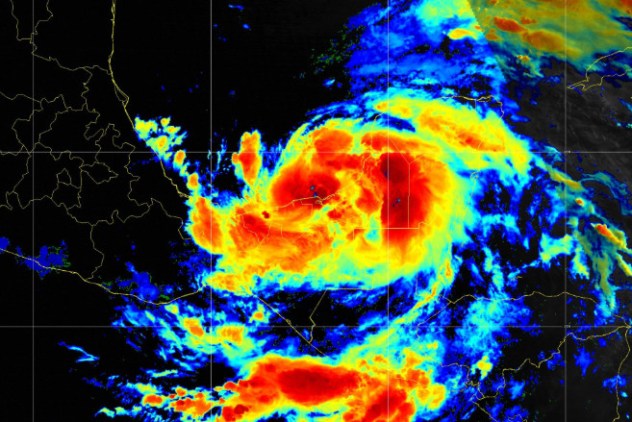 The above infrared-satellite blended image show Cristobal on Wednesday morning, near the coast of Tabasco in the Bay of Campeche (Photo/NOAA).

Cristobal became a tropical storm midday on Tuesday in the Bay of Campeche, located in the southwestern corner of the Gulf of Mexico.

A historic event also occurred just a week ago, when Tropical Storm Amanda made landfall in Guatemala. Amanda was the first tropical storm to make landfall on the Pacific coast of Guatemala since 2010 and only the second in recorded history.